A NASA spacecraft studying Mercury has provided compelling support for the long-held hypothesis the planet harbors abundant water ice and other frozen volatile materials within its permanently shadowed polar craters.

The new information comes from NASA's MErcury Surface, Space ENvironment, GEochemistry, and Ranging (MESSENGER) spacecraft. Its onboard instruments have been studying Mercury in unprecedented detail since its historic arrival there in March 2011. Scientists are seeing clearly for the first time a chapter in the story of how the inner planets, including Earth, acquired their water and some of the chemical building blocks for life.

A radar image of Mercury's north polar region acquired by the Arecibo Observatory. Yellow areas denote regions of high radar reflectivity. Since their discovery in 1992, these polar deposits have been hypothesized to consist of water ice trapped in permanently shadowed areas near Mercury’s north and south pole, but other explanations for the polar deposits have also been suggested. Polar stereographic projection. From J. K. Harmon et al., Icarus, 211, 37–50 (2011). 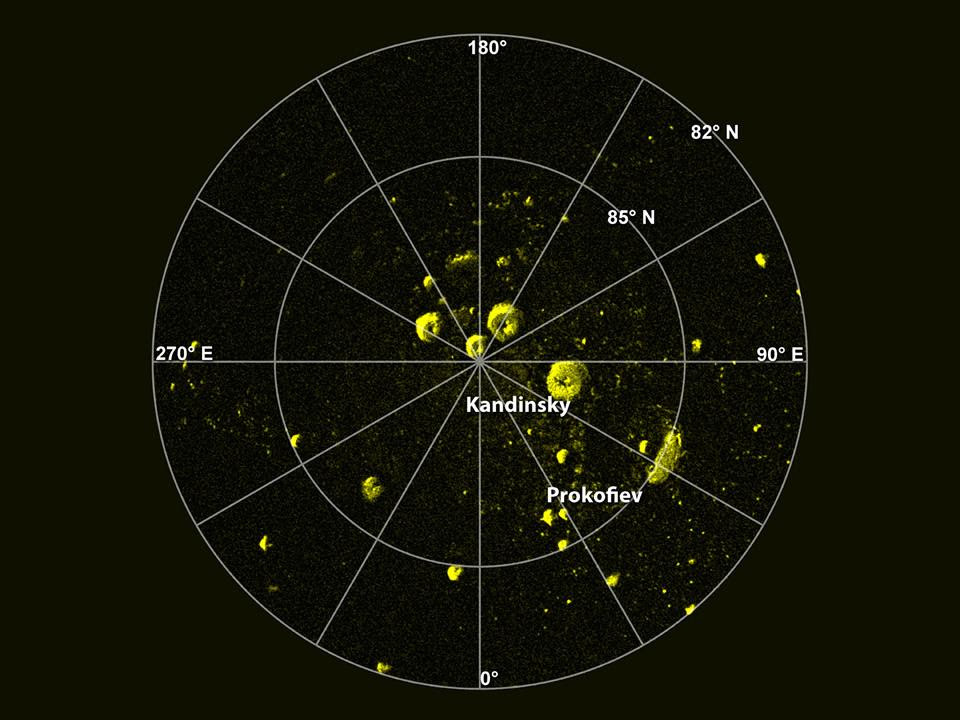 "The new data indicate the water ice in Mercury's polar regions, if spread over an area the size of Washington, D.C., would be more than 2 miles thick," said David Lawrence, a MESSENGER participating scientist at the Johns Hopkins University Applied Physics Laboratory (APL) in Laurel, Md., and lead author of one of three papers describing the findings. The papers were published online in Thursday's edition of Science Express.

Given its proximity to the sun, Mercury would seem to be an unlikely place to find ice. However, the tilt of Mercury's rotational axis is less than 1 degree, and as a result, there are pockets at the planet's poles that never see sunlight.

Tradar image of Mercury's north polar region from Image 2.1 is shown superposed on a mosaic of MESSENGER images of the same area. All of the larger polar deposits are located on the floors or walls of impact craters. Deposits farther from the pole are seen to be concentrated on the north-facing sides of craters. Updated from N. L. Chabot et al., Journal of Geophysical Research, 117, doi: 10.1029/2012JE004172 (2012). 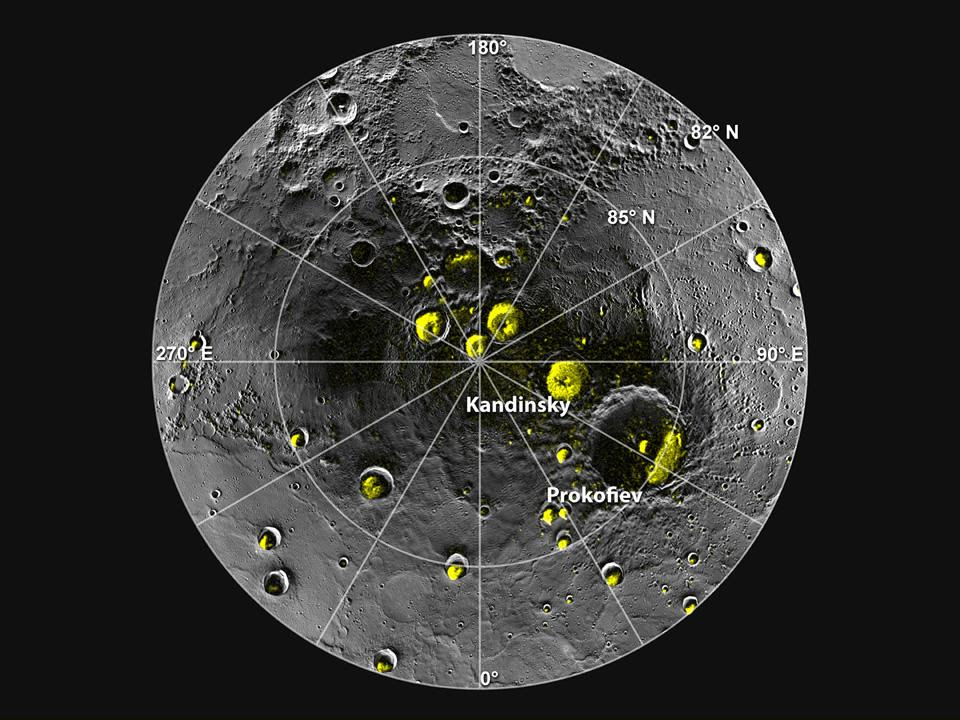 Scientists suggested decades ago there might be water ice and other frozen volatiles trapped at Mercury's poles. The idea received a boost in 1991 when the Arecibo radio telescope in Puerto Rico detected radar-bright patches at Mercury's poles. Many of these patches corresponded to the locations of large impact craters mapped by NASA's Mariner 10 spacecraft in the 1970s. However, because Mariner saw less than 50 percent of the planet, planetary scientists lacked a complete diagram of the poles to compare with the radar images.

Images from the spacecraft taken in 2011 and earlier this year confirmed all radar-bright features at Mercury's north and south poles lie within shadowed regions on the planet's surface. These findings are consistent with the water ice hypothesis.

The new observations from MESSENGER support the idea that ice is the major constituent of Mercury's north polar deposits. These measurements also reveal ice is exposed at the surface in the coldest of those deposits, but buried beneath unusually dark material across most of the deposits. In the areas where ice is buried, temperatures at the surface are slightly too warm for ice to be stable.

"We estimate from our neutron measurements the water ice lies beneath a layer that has much less hydrogen. The surface layer is between 10 and 20 centimeters [4-8 inches] thick," Lawrence said.

"Nobody had seen these dark regions on Mercury before, so they were mysterious at first," Neumann said.

The spacecraft recorded dark patches with diminished reflectance, consistent with the theory that ice in those areas is covered by a thermally insulating layer. Neumann suggests impacts of comets or volatile-rich asteroids could have provided both the dark and bright deposits, a finding corroborated in a third paper led by David Paige of the University of California at Los Angeles.

Shown in red are areas of Mercury’s north polar region that are in shadow in all images acquired by MESSENGER to date. Image coverage, and mapping of shadows, is incomplete near the pole. The polar deposits imaged by Earth-based radar are in yellow (from Image 2.1), and the background image is the mosaic of MESSENGER images from Image 2.2. This comparison indicates that all of the polar deposits imaged by Earth-based radar are located in areas of persistent shadow as documented by MESSENGER images. Updated from N. L. Chabot et al., Journal of Geophysical Research, 117, doi: 10.1029/2012JE004172 (2012). 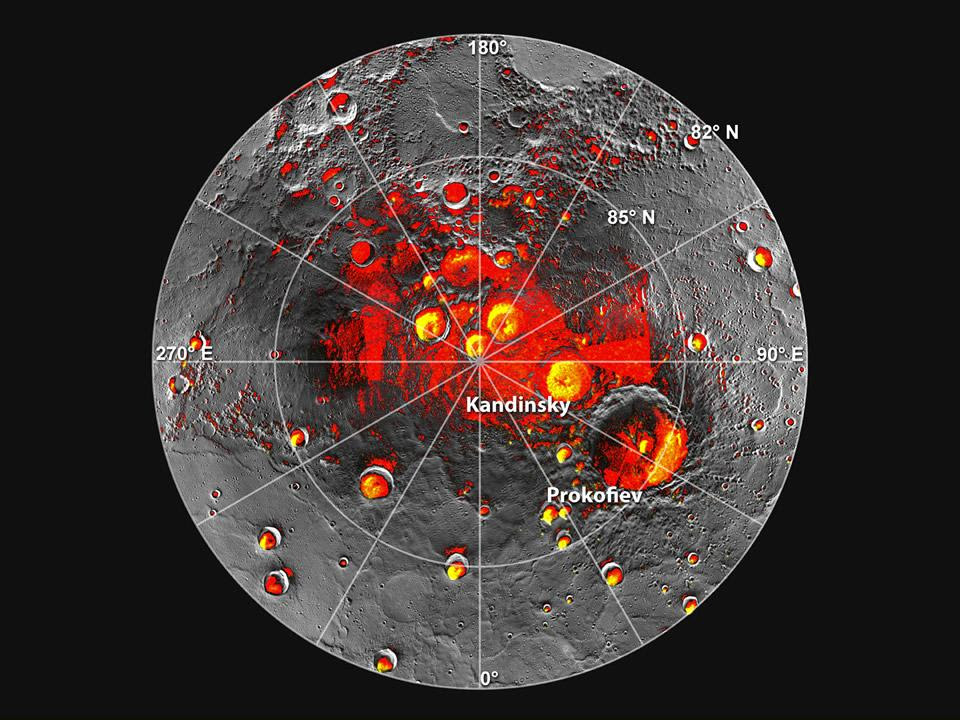 "The dark material is likely a mix of complex organic compounds delivered to Mercury by the impacts of comets and volatile-rich asteroids, the same objects that likely delivered water to the innermost planet," Paige said.

This dark insulating material is a new wrinkle to the story, according to MESSENGER principal investigator Sean Solomon of Columbia University's Lamont-Doherty Earth Observatory in Palisades, N.Y.

"For more than 20 years, the jury has been deliberating whether the planet closest to the sun hosts abundant water ice in its permanently shadowed polar regions," Solomon said. "MESSENGER now has supplied a unanimous affirmative verdict."

MESSENGER was designed and built by APL. The lab manages and operates the mission for NASA's Science Mission Directorate in Washington. The mission is part of NASA's Discovery Program, managed for the directorate by the agency's Marshall Space Flight Center in Huntsville, Ala.
on November 29, 2012