In Australia today, the biggest tree-dwelling mammals are our iconic and much loved koala and the enigmatic Bennett’s tree-kangaroo. The largest males of both species weigh a mere 14 kg. But a study of skeletons unearthed in a World Heritage–listed fossil cave in Queensland – published in PlosONE this week – has revealed that 15 million years ago, Australia’s ancient forest canopies were home to herds of 70 kg wombat-like marsupials. These marsupials were called Nimbadon, and were the largest arboreal marsupial herbivores ever known.

Nimbadon belongs to an extinct group of marsupials called diprotodontoids. This group included the largest mammals in Australian ecosystems for at least the last 25 million years up until their extinction around 30,000 years ago.

Among their ranks was Australia’s answer to the African Rhino, the megafaunal marsupial Diprotodon which weighed a massive 2.5 tonnes. Because of their large size, it has generally been presumed that most were terrestrial (ground-dwelling) species. But a recent study of Nimbadon skeletons has turned this long-held preconception literally upside down. To date, more than 30 Nimbadon skulls and numerous skeletons have been recovered from the fossil cave, known as AL90. They represent individuals ranging in age from tiny, suckling pouch-young to elderly adults.

Studies of the exquisitely preserved skulls and teeth has revealed that Nimbadon was a browser of soft vegetation, had relatively forward-facing eyes and an unusual short, bulbous snout. The latter two features were unusual enough among diprotodontoids, but it was not until the skeletons were examined that its most unexpected features were revealed.
Reconstruction of Nimbadon lavarackorum mother and juvenile 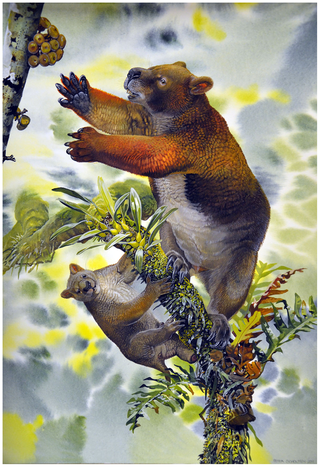 An animal’s skeleton is uniquely adapted to the activity it performs within its environment. By comparingNimbadon’s skeleton with those of living animals of known habitat and lifestyle, we can make relatively accurate deductions about its lifestyle and ecology. Strikingly, and quite unexpectedly, we found Nimbadon’s skeleton to be most similar to that of the living koala, particularly in the structure of its limbs, hands and feet.

Like the koala, Nimbadon had powerful forelimbs with highly mobile shoulder, elbow and wrist joints. These would have allowed significant extension and rotation of the arms, movement that is essential for manoeuvring through a tree canopy, reaching for new supports and for balancing on branches.

Nimbadon’s hands and feet were extremely large and equipped with long, flexible fingers and toes, semi-opposable first digits and massive, sharp, re-curved claws. Combined with the deep carpal tunnel of the wrist (to house the flexor tendons of the fingers), these features suggest Nimbadon possessed an exceptionally powerful grasp with claws capable of deeply penetrating the tree trunk during climbing.

Like the koala, Nimbadon may have adopted a trunk-hugging climbing style. Interestingly, Nimbadon may also have been hanging from tree branches. Nimbadon is unique among marsupials in having short hindlimbs relative to its forelimbs. These limb proportions are found today in animals such as sloths and some apes that regularly hang from tree branches using their powerful forelimbs.

While a 70kg tree-dwelling marsupial may seem improbable, large arboreal and/or climbing mammals are well known, especially in rainforest habitats like that of Nimbadon’s. For example, the orangutan, the largest living arboreal mammal, can reach weights in excess of 100 kg.

Bears are also habitual climbers. The Malayan Sun Bear spends a significant amount of time feeding within the canopies of the lowland tropical rainforests of South East Asia, and has even been known to build nests in the trees.

Nimbadon’s climbing ability would have given it access to multiple layers of the rainforest canopy for both food and protection from predators. It may also have played a role as a large seed disperser in Australia’s ancient forests, supplementing its diet with fruit. Perhaps the bulbous snout and enlarged nasal sinuses are evidence for an enhanced olfactory system to detect these fruits.

So how did an ancient cave become a graveyard for so many tree-dwelling individuals of Nimbadon? The geology of AL90 suggests that the ancient cave’s entrance was vertically orientated, with its opening at ground-level. Obscured by vegetation, the entrance would have acted as a kind of pit-fall trap with unsuspecting animals dropping in. While moving through the tree crowns that would have arched over the cave’s entrance, every once in a while individuals would have missed their grip and dropped into what was to become the AL90 time capsule. The large number of Nimbadon within the fossil cave suggests they may have been common within their rainforest environment and may have moved through the tree tops in herds or large family groups.

Nimbadon disappeared from the fossil record around 15 million years ago, at a time that coincided with the beginning of Australia’s transformation from lush greenhouse environments to the dryer, cooler, climatically unpredictable continent we see today. The primary inland rainforest habitat of Nimbadon gradually gave way to open forests and with this change, Nimbadon’s time came to an end.

Nothing like Nimbadon exists in any of Australia’s modern forests. Along with all the other bizarre creatures that once populated the ancient rainforests of Riversleigh, Nimbadon is a reminder that modern Australian forests, as richly diverse as they are today, are actually a pale shade of their former selves.

Karen Black is an ARC Postdoctoral Research Fellow in the School of Biological, Earth and Environmental Sciences at UNSW.

This opinion piece was first published in The Conversation.
on November 26, 2012