How Many Universes Are There?

The multiverse (or meta-universe) is the hypothetical set of multiple possible universes (including the historical universe we consistently experience) that together comprise everything that exists and can exist: the entirety of space, time, matter, and energy as well as the physical laws and constants that describe them. The term was coined in 1895 by the American philosopher and psychologist William James.

The various universes within the multiverse are sometimes called parallel universes.
The structure of the multiverse, the nature of each universe within it and the relationship between the various constituent universes, depend on the specific multiverse hypothesis considered. Multiple universes have been hypothesized in cosmology, physics, astronomy, religion, philosophy, transpersonal psychology and fiction, particularly in science fiction and fantasy. In these contexts, parallel universes are also called "alternative universes", "quantum universes", "interpenetrating dimensions", "parallel dimensions", "parallel worlds", "alternative realities", "alternative timelines", and "dimensional planes," among others.

The fact that no one knows the answer to this question is what makes it exciting. The story of physics has been one of an ever-expanding understanding of the sheer scale of reality, to the point where physicists are now postulating that there may be far more universes than just our own. Chris Anderson explores the thrilling implications of this idea.


Level I: Beyond our cosmological horizon

A generic prediction of chaotic inflation is an infinite ergodic universe, which, being infinite, must contain Hubble volumes realizing all initial conditions.

Accordingly, an infinite universe will contain an infinite number of Hubble volumes, all having the same physical laws and physical constants. In regard to configurations such as the distribution of matter, almost all will differ from our Hubble volume. However, because there are infinitely many, far beyond the cosmological horizon, there will eventually be Hubble volumes with similar, and even identical, configurations. Tegmark estimates that an identical volume to ours should be about 210118 meters away from us. Given infinite space, there would, in fact, be an infinite number of Hubble volumes identical to ours in the universe.This follows directly from the cosmological principle, wherein it is assumed our Hubble volume is not special or unique. 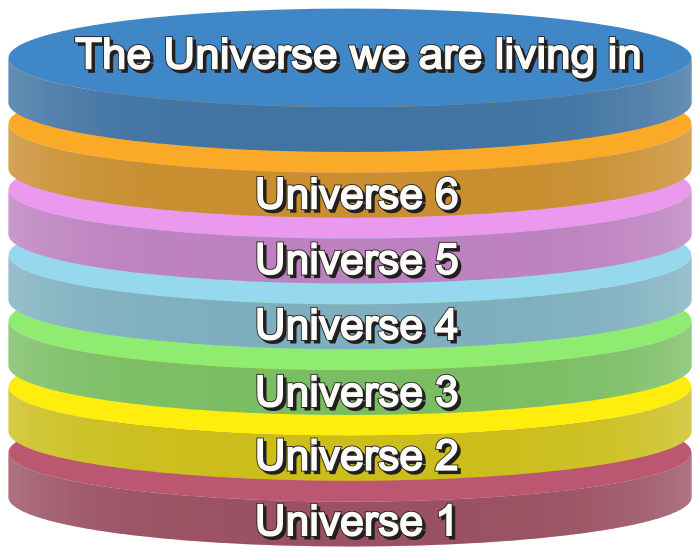 In the chaotic inflation theory, a variant of the cosmic inflation theory, the multiverse as a whole is stretching and will continue doing so forever, but some regions of space stop stretching and form distinct bubbles, like gas pockets in a loaf of rising bread. Such bubbles are embryonic level I multiverses. Linde and Vanchurin calculated the number of these universes to be on the scale of 101010,000,000. 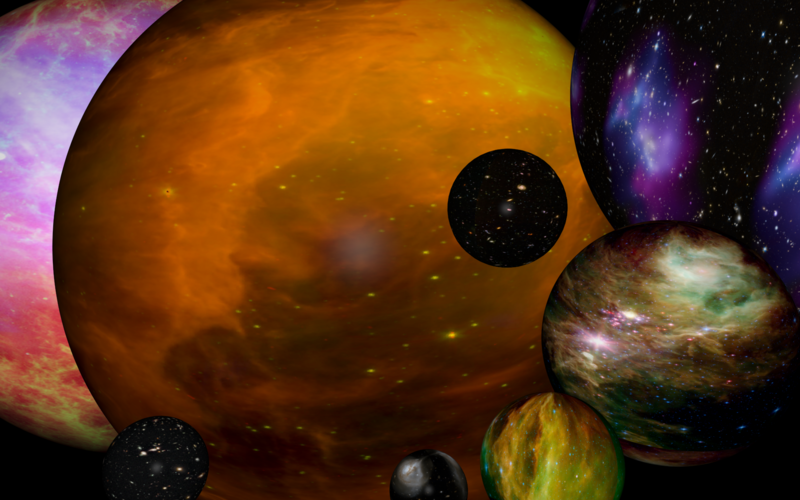 Hugh Everett's many-worlds interpretation (MWI) is one of several mainstream interpretations of quantum mechanics. In brief, one aspect of quantum mechanics is that certain observations cannot be predicted absolutely. Instead, there is a range of possible observations, each with a different probability. According to the MWI, each of these possible observations corresponds to a different universe. Suppose a die is thrown that contains six sides and that the numeric result of the throw corresponds to a quantum mechanics observable. All six possible ways the die can fall correspond to six different universes. (More correctly, in MWI there is only a single universe but after the "split" into "many worlds" these cannot in general interact.)

The Ultimate Ensemble is the hypothesis of Tegmark himself. This level considers equally real all universes that can be described by different mathematical structures. Tegmark writes that "abstract mathematics is so general that any Theory Of Everything (TOE) that is definable in purely formal terms (independent of vague human terminology) is also a mathematical structure. For instance, a TOE involving a set of different types of entities (denoted by words, say) and relations between them (denoted by additional words) is nothing but what mathematicians call a set-theoretical model, and one can generally find a formal system that it is a model of." He argues this "implies that any conceivable parallel universe theory can be described at Level IV" and "subsumes all other ensembles, therefore brings closure to the hierarchy of multiverses, and there cannot be say a Level V."

Jürgen Schmidhuber, however, says the "set of mathematical structures" is not even well-defined, and admits only universe representations describable by constructive mathematics, that is, computer programs. He explicitly includes universe representations describable by non-halting programs whose output bits converge after finite time, although the convergence time itself may not be predictable by a halting program, due to Kurt Gödel's limitations. He also explicitly discusses the more restricted ensemble of quickly computable universes
on November 22, 2012