How Does A Volcanic Crater Grow? Grab Some TNT And Find Out

- A voice carried across the treeless plateau: "Fire in the hole! The range is now active."

"That was great. It was exactly what we expected," said Valentine, PhD, director of UB's Center for Geohazards Studies.
A new University at Buffalo study in the journal Geophysical Research Letters examines maar craters, which resemble the bowl-like cavities formed by meteorites but are in some ways more mysterious.

Scientists often can discern pertinent details about meteorites -- when they struck, how large they were, the angle they approached Earth and other information -- by measuring the diameter and volume of the impact crater.

Maar craters, which form when fissures of magma beneath Earth's surface meet groundwater, causing volcanic explosions, are not as telling, scientists say. The possibility of multiple explosions at varying depths led most scientists to believe that measuring a maar's size is not the best way to gauge the energy of individual explosions or determine future hazards.

Maar crater: Phreatomagmatic activity as a result of the Ukinrek Maars in Alaska.the result of a 10-day volcanic eruption in 1977. The maar is about 300 m (980 ft) in diameter 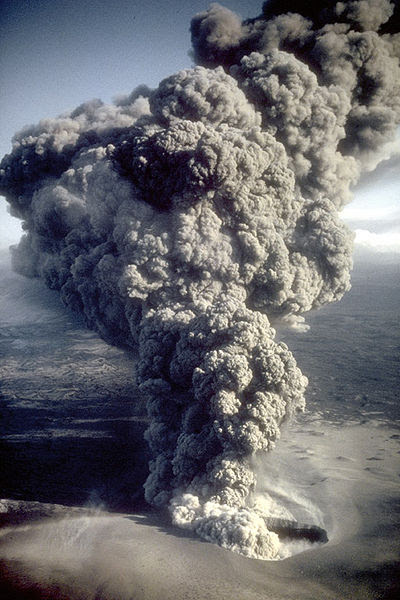 University at Buffalo researchers simulated volcanic eruptions in July in Ashford, N.Y. The experiment will help determine what happens before and after an eruption; it could also help mining companies find diamonds.

UB geologist Greg A. Valentine, PhD, and other volcano researchers found instead that examining a maar's shape and the distance it ejects magma, ash and other debris to be a more accurate barometer of the eruption's force. The findings are important, he said, because they could assist scientists in estimating how big future volcano eruptions might be.

"It's something that, up until this point, had only been suspected," said Valentine, a professor of geology and lead author of the Geophysical Research Letters paper. "The simulations we did prove that crater diameter is not a good indicator of explosion energy for these volcanoes." The scientists drew their conclusions on a series of UB-funded experiments conducted last summer at a test site in Ashford, N.Y. They built three test beds of gravel, limestone and asphalt. In the first experiment one charge of TNT and plastic explosive was detonated.

In subsequent experiments, the charge was divided into three parts and detonated individually at different depths. The final dimensions of each crater were about the same. That matters, according to Valentine, because it shows that it's easy to overestimate the energy of explosions if one assumes that the crater comes from one blast, not several.

The dispersal of ejected material differed depending on the location of the charge. For example, the first experiment launched debris more than 50 feet from the crater. Debris from subsequent experiments simulating blasts further underground mostly went up in the air and fell back into the crater or around its rim. As a result, it forced dusty gas -- like the ash that shut down air travel in Iceland and beyond in 2010 -- into the surrounding air.

The experiment, a rare large-scale attempt to simulate volcanic eruptions, is drawing international attention because it will provide much-needed insight into one of Earth's most powerful and mysterious natural disasters. If that wasn't enough, it may help mining companies find diamonds.
When most people think of volcanoes, images of exploding mountain tops come to mind. There is another type of volcano, however, called a maar. They feature large craters, often topped by a pool of water, near mountain ranges. Maars range from a few hundred feet to more than a mile across.

The UB-funded experiment, which took place on land owned by Cheektowaga-based Calspan Corp., focused on maars. It unfolded over several days in July. The idea, according to Valentine, was not to determine how or when eruptions will occur, but rather to figure out what happens during and after an eruption.

Do subsequent eruptions cause the crater to expand? Will the volcano spew enough ash to affect air travel, as did the 2010 volcanic eruption in Iceland?

To help answer those questions, Valentine and researchers built three test beds, each 12-feet-by-12-feet square, and packed them with gravel, limestone and asphalt, 3 to 3-1/2 feet deep. Explosives roughly as powerful as a grenade were placed in post holes and detonated.

Because volcanic eruptions are naturally occurring, each with their own distinct features, it isn't possible to exactly replicate one, Valentine said. But the test beds are an accurate barometer to base conclusions on because researchers can control the strength of the blast, he said.

The experiment drew the attention of Jacopo Taddeucci, PhD, a volcanologist at the National Institute of Geophysics and Volcanology in Rome, Italy. He flew into Buffalo for the occasion to use high-speed cameras to record the explosions.

The three maars near Daun (Germany) 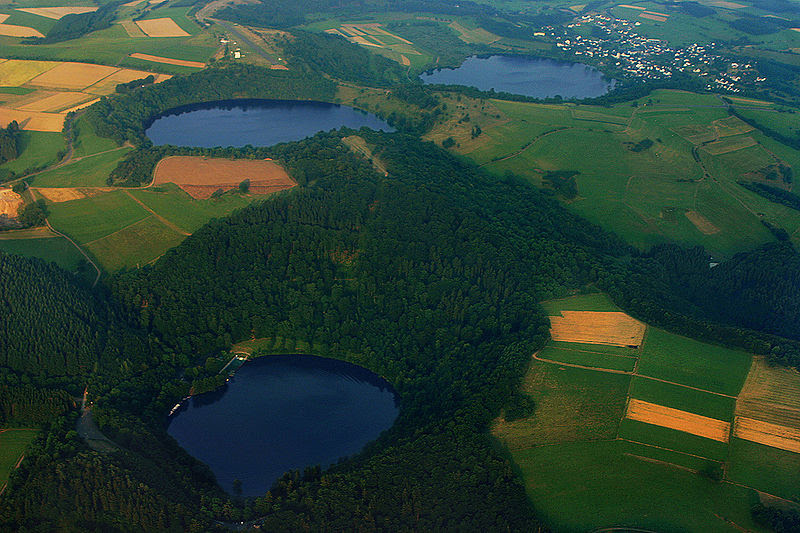 "Large-scale experiments like this are quite rare," he said in between blasts.

It also piqued the interest of Manoranjan Majii, PhD, an assistant professor of mechanical and aerospace engineering at UB. Majii used the experiment to test software he developed that provides near instantaneous 3-D imagery of Earth's surface, including craters.

While it's too early to draw conclusions, the experiment could provide insight into the location of diamonds. The valuable gemstone is brought close to Earth's surface by the funnel-shaped mass of magma and broken rock that form under volcanoes, Valentine said.

He will spend the next few months analyzing results of the experiment before reporting his findings in a yet-to-be determined academic journal. For the time being though, Valentine said he is happy with the results.

"I've learned more today, without analyzing this entirely, as I would if I spent an entire year reading technical papers."

Contacts and sources:
Cory Nealon
University at Buffalo
on November 27, 2012