Gravitational Shockwave Weapons: Patented Handgun That Can Destroy Anything 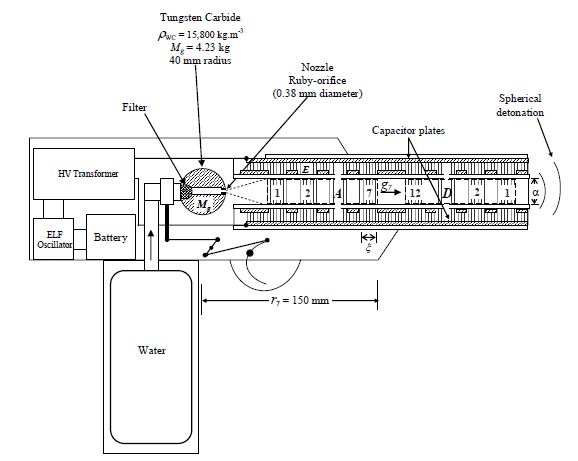 At the front of the detonation zone, an energy pulse or “shockwave” is generated and transmitted to the adjacent region. The shockwave travels outward as a compression wave, moving at or near detonation velocity. When the intensity of the shockwave exceeds the compression strength of the materials they are destroyed. If the mass of the body is too large the wave energy is simply absorbed by the body.


The pressure produced in the explosion zone is called Detonation Pressure. It expresses the intensity of the generated shockwave. A high detonation pressure is necessary when blasting hard, dense bodies. Detonation pressures of high explosives are in the range from  106N/m2 to over 107 N/m2 .

The design of a portable shockwave weapon, which uses the Gravitational Shielding Effect (BR Patent Number: PI0805046-5, July 31, 2008) can produce detonations velocities greater than 100,000m/s, and detonation pressures greater than 1010N/m2  It is important to remember that an aluminum-nitrate truck bomb has a relatively low detonation velocity of 3,500 m/s (sound speed is 343.2m/s).  The gun could rip through the strongest steel as if it were tissue paper,  it could destroy anything that the shockwave hit.

The amazing thing is the gun uses atomized water and extremely low frequency electromagnetic waves to produce the gravitation shockwave.    The weapon is detailed in Gravitational Shockwave Weapons    Extremely low frequency (ELF) waves are electromagnetic radiation (radio waves) with frequencies from 3 to 300 Hz, and corresponding wavelengths from 100,000 to 1000 kilometers.