This animation is a composite of 18 still photographs taken by Bay Area, Calif., resident, Bob Moreno, of the October 17 fireball.

October was an exciting month for human daring, engineering and scientific achievement.

To read about a few examples, click here!
But despite our phenomenal achievements, nature still managed to provide us with a couple of awe-inspiring spectacles. The Orionids, one of the most beautiful annual meteor showers, peaked in October and, as if to herald the show, a dramatic fireball was seen and even heard across the San Francisco Bay Area on the night of Wednesday Oct.17.

The Orionids, so named because of the famous constellation from which they appear to emerge, can be seen every year in October. Similar to shooting stars, they are formed by dust and debris disintegrating in Earth’s atmosphere. What makes the Orionids – and indeed every annual shower – so special, is that the dust is left over from the path of a comet. The Orionids occur when Earth travels through the path of a particularly beloved celestial traveler – Halley’s Comet.

Halley’s Comet passes over Earth every 75-76 years and won’t return until 2061. It is currently only 0.3 billion miles from its furthest distance (aphelion) from the sun – around 3.3 billion miles. However, because of Johannes Kepler’s laws of planetary motion – which cause an object to slow down as it approaches the aphelion – it will take until 2023 to reach this point. Despite this vast distance (further than the orbit of Neptune), year after year we pass through dusty debris left behind by the comet during one of its orbits around the sun.

This is a composite, false-color image that combines meteor fall from various meteor showers (Orionids, Perseids, Geminids) from 2009-2011. All images are based on grey-scale images provided by the Meteoroid Environment Office at NASA's Marshall Space Flight Center in Huntsville, Ala. 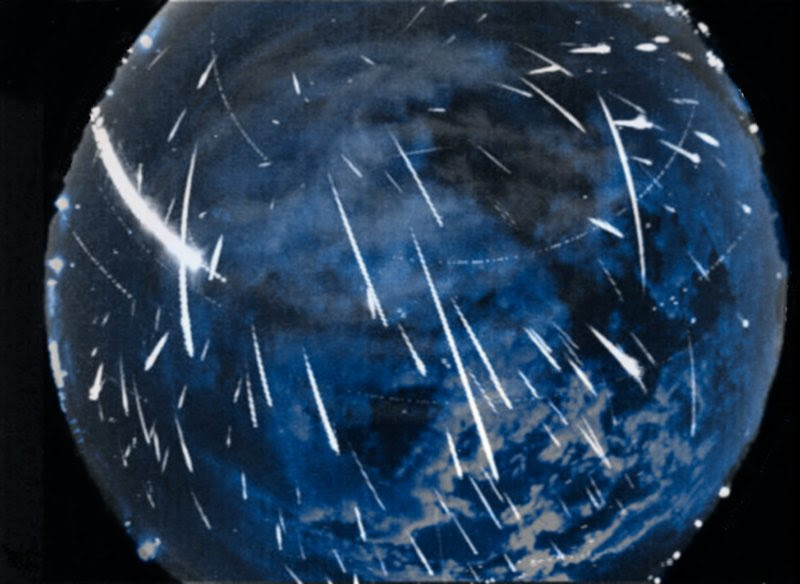 Because the comet is on a different orbital plane from Earth and never gets closer than 13.5 million miles, we do not pass through the comet’s dust clouds immediately after they are ejected. It is only after the dust is distributed by the solar wind and gravitational forces, that we encounter it. Because of the time this takes Orionid meteoroids are likely very ancient.

Definition: Meteors are the visible phenomenon seen in the sky caused bymeteoroids burning up in the atmosphere, which, very rarely, make it all the way to Earth to become meteorites.


Speed! The Orionids are the second fastest meteors of the year. They collide with Earth’s atmosphere at a whopping 148,000 miles per hour to produce a spectacular celestial show.. When meteoroids enter the atmosphere, they collide with air molecules and discharge a vapor of materials, such as sodium, iron and magnesium. Electrons knocked out of position by these collisions emit light when they settle back into place. This is the same process seen in fluorescent lighting.

Sound! In addition to being brighter, larger and faster meteors might make a soft hissing sound and very large ones can cause a sonic boom when they break the sound barrier, which – like the Oct. 17, 2012 fireball – are easily heard on the ground.

NASA Ames and SETI Institute meteor astronomer Dr. Peter Jenniskens collects the Sutter’s Mill meteorites, which were discovered after a meteor was seen in April this year, using aluminum foil to not contaminate the rocks by touch. 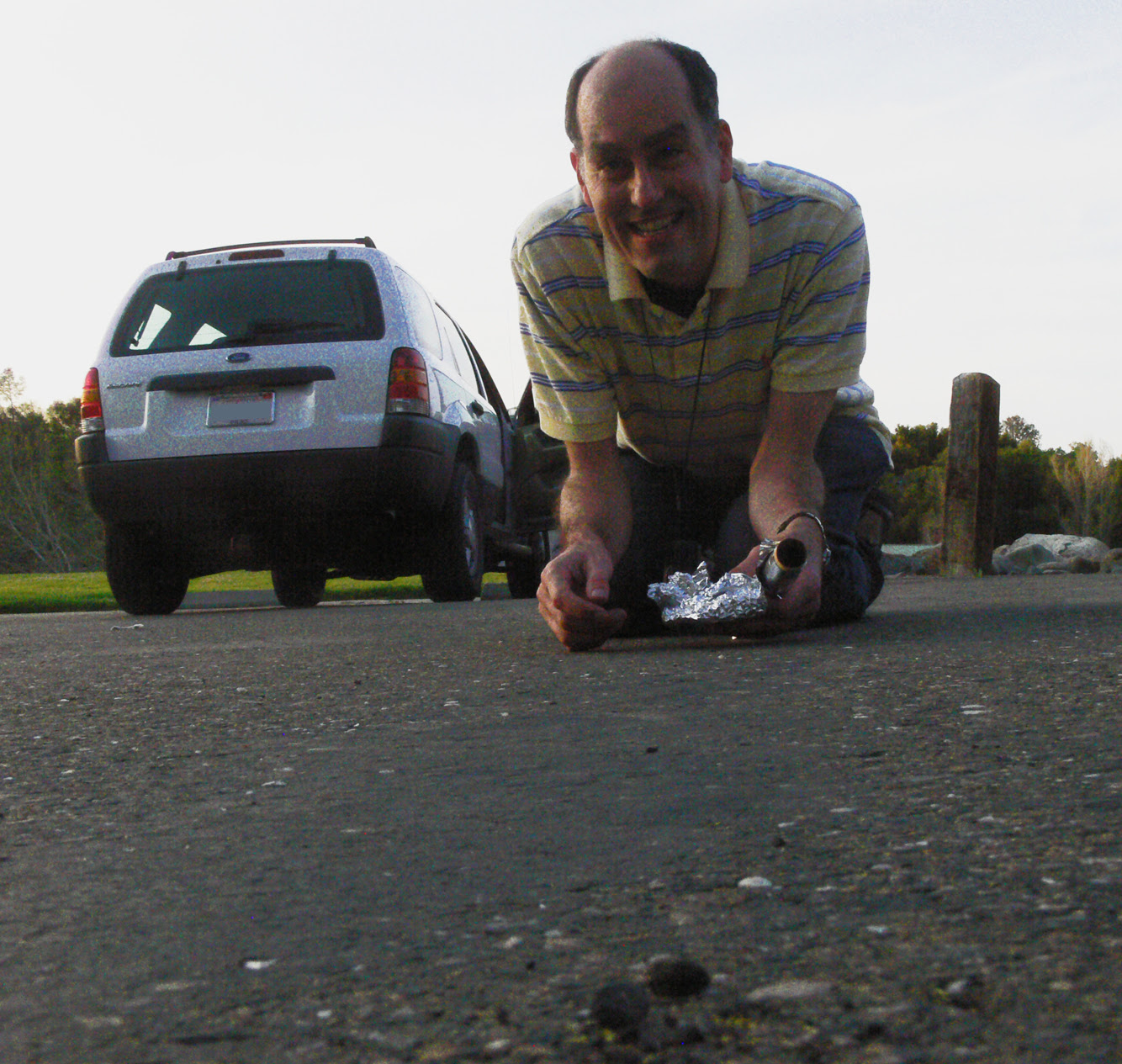 Although at first many believed that the fireball was connected to the Orionids, it turns out it was unrelated. Since Orionid meteoroids originated from Halley’s Comet, their motion travels in approximately the same direction on parallel trajectories and appears to originate from a single point in the sky. The meteorites nearest this point appear small because they are foreshortened, while the ones on the periphery are elongated, because they can be viewed from their side. However, despite their appearance, they are all traveling in the same direction. The Oct. 17 meteor was found not to have been an Orionid, because it did not fit the correct trajectory.

If you find a suspected meteorite, which tend to be completely black and are always magnetic, it is most important to touch it as little as possible, as your hands’ moisture will contaminate it. When handling the meteorite sample, be sure to use aluminum foil to pick it up and quickly put in inside a dry, airtight container for storage in your freezer.

To determine if your sample is a meteorite, contact meteor astronomer Peter Jenniskens of the SETI Institute at:  petrus.m.jenniskens@nasa.gov

Other October space highlights include:

Adventurer Felix Baumgartner recently plunged from 24 miles above Earth– that’s near the far edge of the stratosphere – towards Earth in a record-setting freefall. His daredevil flight lasted four minutes and 18 seconds, reaching speeds up to 833 miles per hour, as Baumgartner became the first human projectile to break the sound barrier.

On Oct. 10, 2012, a SpaceX Dragon spacecraft berthed at theInternational Space Station (ISS). The docking was the first-ever commercial resupply mission to the space station.

Also in October, southern California residents were treated to a once-in-a-lifetime spectacle as the space shuttle Endeavour slowly made its waythrough the streets of Los Angeles on its way to its new home at the California Science Center. On Oct 15, 2012, Curiosity took its first bite of Martian soil and is busy ingesting it using the CheMin instrument developed at NASA’s Ames Research Center, Moffett Field, Calif.

And if that wasn’t enough, two more planets outside our solar systemhave been discovered! First, a discovery of a planet in the Alpha Centauri system, the closest star system to Earth, piqued the interest of anyone hoping to visit an alien world outside our solar system. The ultra-hot rocky planet is a mere 4.37 light years from our sun but would take the Voyager 1 spacecraft around 75,000 years to reach it. The other exoplanet, a bizarre system consisting of a planet orbiting a binary star that, in turn, is orbited by a second distant pair of stars, is a citizen-scientist discovery using Kepler data.

To report video and photographic records of meteorites and for the latest information about local meteorites, visit:
http://cams.seti.org

If you have images of the 2012 Orionids, you can post them at:
www.flickr.com/groups/orionids/