For the very first time researchers have streamed braille patterns directly into a blind patient's retina, allowing him to read four-letter words accurately and quickly with an ocular neuroprosthetic device.

The device, the Argus II, has been implanted in over 50 patients, many of who can now see color, movement and objects. It uses a small camera mounted on a pair of glasses, a portable processor to translate the signal from the camera into electrical stimulation, and a microchip with electrodes implanted directly on the retina.

This is the headset for the Argus II retinal implant device from Second Sight. 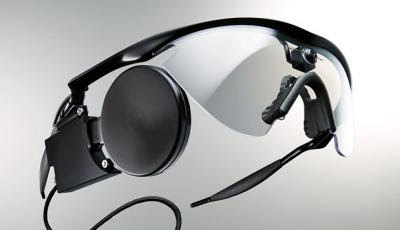 Credit: Second Sight
The study was authored by researchers at Second Sight, the company who developed the device, and has been published in Frontiers in Neuroprosthetics on the 22nd of November.


"In this clinical test with a single blind patient, we bypassed the camera that is the usual input for the implant and directly stimulated the retina. Instead of feeling the braille on the tips of his fingers, the patient could see the patterns we projected and then read individual letters in less than a second with up to 89% accuracy," explains researcher Thomas Lauritzen, lead author of the paper.

Similar in concept to successful cochlear implants, the visual implant uses a grid of 60 electrodes—attached to the retina—to stimulate patterns directly onto the nerve cells. For this study, the researchers at Second Sight used a computer to stimulate six of these points on the grid to project the braille letters. A series of tests were conducted with single letters as well as words ranging in length from two letters up to four. The patient was shown each letter for half a second and had up to 80% accuracy for short words.

"There was no input except the electrode stimulation and the patient recognized the braille letters easily. This proves that the patient has good spatial resolution because he could easily distinguish between signals on different, individual electrodes." says Lauritzen.


This shows the grid of electrons directly implanted on the retina. 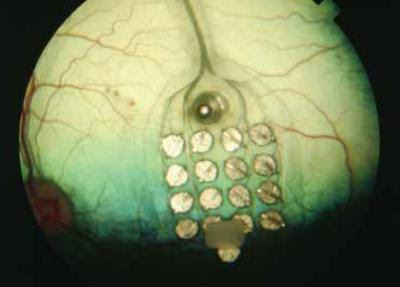 According to Silvestro Micera at EPFL's Center for Neuroprosthetics and scientific reviewer for the article, "this study is a proof of concept that points to the importance of clinical experiments involving new neuroprosthetic devices to improve the technology and innovate adaptable solutions."

Primarily for sufferers of the genetic disease Retinitis Pigmentosa (RP), the implant Argus II has been shown to restore limited reading capability of large conventional letters and short words when used with the camera. While reading should improve with future iterations of the Argus II, the current study shows how the Argus II could be adapted to provide an alternative and potentially faster method of text reading with the addition of letter recognition software. This ability to perform image processing in software prior to sending the signal to the implant is a unique advantage of Argus II.