Bioengineered Marine Algae Expands Environments Where Biofuels Can Be Produced

Biologists at UC San Diego have demonstrated for the first time that marine algae can be just as capable as fresh water algae in producing biofuels.

The scientists genetically engineered marine algae to produce five different kinds of industrially important enzymes and say the same process they used could be employed to enhance the yield of petroleum-like compounds from these salt water algae. Their achievement is detailed in a paper published online in the current issue of the scientific journal Algal Research.

Salt ponds in the SF Bay area where the marine algae Dunaliella salina display a bright red color in response to the stress of high salt concentrations. 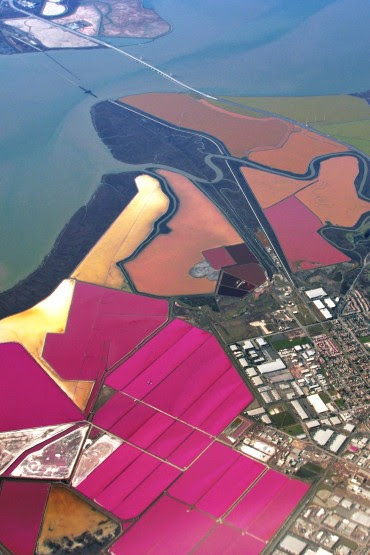 The ability to genetically transform marine algae into a biofuel crop is important because it expands the kinds of environments in which algae can be conceivably grown for biofuels. Corn, for example, which is used to produce ethanol biofuel, requires prime farmland and lots of fresh water. But the UC San Diego study suggests that algal biofuels can be produced in the ocean or in the brackish water of tidelands or even on agricultural land on which crops can no longer be grown because of high salt content in the soil.

“What our research shows is that we can achieve in marine species exactly what we’ve already done in fresh water species,” said Stephen Mayfield, a professor of biology at UC San Diego, who headed the research project. “There are about 10 million acres of land across the United States where crops can no longer be grown that could be used to produce algae for biofuels. Marine species of algae tend to tolerate a range of salt environments, but many fresh water species don’t do the reverse. They don’t tolerate any salt in the environment.”

“The algal community has worked on fresh water species of algae for 40 years,” added Mayfield, who also directs the San Diego Center for Algae Biotechnology, or SD-CAB, a consortium of research institutions in the region working to make algal biofuels a viable transportation fuel in the future. “We know how to grow them, manipulate them genetically, express recombinant proteins—all of the things required to make biofuels viable. It was always assumed that we could do the same thing in marine species, but there was always some debate in the community as to whether that could really be done.”

That debate came to a head last month when a National Academy of Sciences committee examining the future potential of algal biofuels for the U.S. Department of Energy published a report pointing out that the production of algal biofuels might be limited by fresh water because no published research study had demonstrated the feasibility of using engineered marine species of algae.

The UC San Diego biologists focused their study on a marine species of alga, Dunaliella tertiolecta, which had been earlier targeted by scientists for potential biofuels production because of its high oil content and ability to grow rapidly under a wide range of salinity and acidic conditions. To demonstrate that it could be used in commercial biofuel production, they introduced five genes into the alga that produced five different kinds of enzymes that could be used in an industrial setting to not only convert biomass to fuel, but also increase nutrient availability in animal feed. Some of these enzymes, for example, came from a fungus that degrades plant material into simple sugars.

The scientists said in their paper that “we hope to eventually determine whether whole algae, post-oil extraction, may be used as a feed additive to improve animal feeds. Animal feed is a relatively high volume market that may be able to benefit from algae-produced proteins as a feed additive.”