We know that unborn babies hiccup, swallow and stretch in the womb but new observational research concludes that they also yawn.

The 4D scans of 15 healthy fetuses, by Durham and Lancaster Universities, also suggest that yawning is a developmental process which could potentially give doctors another index of a fetus’ health.

The study is published today in the prestigious international academic journal,PLOS ONE. It was funded by the Economic and Social Research Council (ESRC). 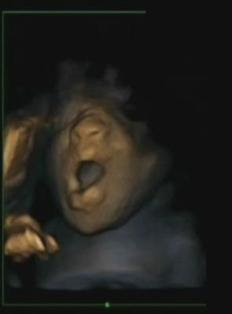 While some researchers have suggested that fetuses yawn, others have disagreed and claim it is simple mouth opening.

But the new research clearly distinguished ‘yawning’ from ‘non-yawn mouth opening’ based on the duration of mouth opening. The researchers did this by using the 4D video footage to closely examine all events where a mouth stretch occurred in the fetus.

Using their newly developed criteria, the research team found that over half of the mouth openings observed in the study were classed as yawns.

The study was carried out on eight female and seven male foetuses from 24 to 36 weeks gestation. The researchers found that yawning declined from 28 weeks and that there was no significant difference between boys and girls in yawning frequency.

Although the function and importance of yawning is still unknown, the study findings suggest that yawning could be linked to fetal development, and as such could provide a further medical indication of the health of the unborn baby.

Lead researcher, Dr Nadja Reissland, of Durham University’s Department of Psychology, said: “The results of this study demonstrate that yawning can be observed in healthy fetuses and extends previous work on fetal yawning. Our longitudinal study shows that yawning declines with increasing fetal age.

“Unlike us, fetuses do not yawn contagiously, nor do they yawn because they are sleepy. Instead, the frequency of yawning in the womb may be linked to the maturing of the brain early in gestation.

“Given that the frequency of yawning in our sample of healthy fetuses declined from 28 weeks to 36 weeks gestation, it seems to suggest that yawning and simple mouth opening have this maturational function early in gestation.”

She added that yawning could be related to central nervous system maturation but further research involving mother and fetus would be required to examine this theory.

Watch a short video of a fetus yawning in the womb here:

Use of video with kind permission from Dr Wolfgang Moroder
on November 22, 2012