This week a pioneering study published in the Proceedings of the National Academy of Sciences (PNAS) and co-authored by Dr. Alison Murray and Dr. Christian Fritsen of Nevada's Desert Research Institute (DRI) reveals, for the first time, a viable community of bacteria that survives and ekes out a living in a dark, salty and subfreezing environment beneath nearly 20 meters of ice in one of Antarctica's most isolated lakes.

Lake Vida, the largest of several unique lakes found in the McMurdo Dry Valleys, contains no oxygen, is mostly frozen and possesses the highest nitrous oxide levels of any natural water body on Earth. A briny liquid that is approximately six times saltier than seawater percolates throughout the icy environment that has an average temperature of minus 13.5 degrees centigrade (or 8 degrees Fahrenheit).

Members of the 2010 Lake Vida expedition team, Dr. Peter Doran (professor, University of Illinois, Chicago), Dr. Chris Fritsen (research professor, Desert Research Institute, Reno, Nev.) and Jay Kyne (an ice driller) use a sidewinder drill inside a secure, sterile tent on the lake’s surface to collect an ice core and brine existing in a voluminous network of channels 16 meters and more below the lake surface. 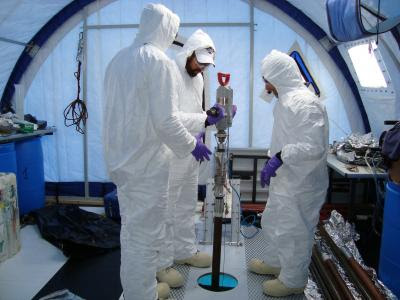 "This study provides a window into one of the most unique ecosystems on Earth," said Murray, the report's lead author, and molecular microbial ecologist and polar researcher for the past 17 years, who has participated in 14 expeditions to the Southern Ocean and Antarctic continent. "Our knowledge of geochemical and microbial processes in lightless icy environments, especially at subzero temperatures, has been mostly unknown up until now. This work expands our understanding of the types of life that can survive in these isolated, cryoecosystems and how different strategies may be used to exist in such challenging environments."

Despite the very cold, dark and isolated nature of the habitat, the report finds that the brine harbors a surprisingly diverse and abundant assemblage of bacteria that survive without a present-day source of energy from the sun. Previous studies of Lake Vida dating back to 1996 indicate that the brine and its' inhabitants have been isolated from outside influences for more than 3,000 years.

Murray and her co-authors and collaborators, including the project's principal investigator Dr. Peter Doran of the University of Illinois at Chicago, developed stringent protocols and specialized equipment for their 2005 and 2010 field campaigns to sample the lake brine while avoiding contaminating the pristine ecosystem.

To sample the unique environment researchers worked under secure, sterile tents on the lake's surface to keep the site and equipment clean as they drilled ice cores, collected samples of the salty brine residing in the lake ice and then assessed the chemical qualities of the water and its potential for harboring and sustaining life, in addition to describing the diversity of the organisms detected.

Research field camp on Lake Vida, located in Victoria Valley, the northern most of the McMurdo Dry Valleys. 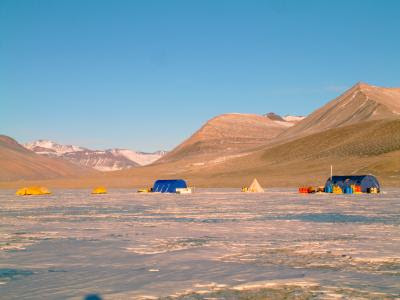 Geochemical analyses suggest that chemical reactions between the brine and the underlying iron-rich sediments generate nitrous oxide and molecular hydrogen. The latter, in part, may provide the energy needed to support the brine's diverse microbial life.

"It's plausible that a life-supporting energy source exists solely from the chemical reaction between anoxic salt water and the rock," explained Fritsen, a systems microbial ecologist and Research Professor in DRI's Division of Earth and Ecosystem Sciences.

"If that's the case," echoed Murray. "This gives us an entirely new framework for thinking of how life can be supported in cryoecosystems on earth and in other icy worlds of the universe."

Murray added further research is currently under way to analyze the abiotic, chemical interactions between the Lake Vida brine and the sediment, in addition to investigating the microbial community by using different genome sequencing approaches. The results could help explain the potential for life in other salty, cryogenic environments beyond Earth.

The Lake Vida brine also represents a cryoecosystem that is a suitable and accessible analog for the soils, sediments, wetlands, and lakes underlying the Antarctic ice sheet that other polar researchers are just now beginning to explore.

The funding for this research was supported jointly by the National Science Foundation (NSF) and the National Aeronautics and Space Administration (NASA).