Scientists have engineered bacteria that are capable of sacrificing themselves for the good of the bacterial population. These altruistically inclined bacteria, which are described online in the journal Molecular Systems Biology, can be used to demonstrate the conditions where programmed cell death becomes a distinct advantage for the survival of the bacterial population.

"We have used a synthetic biology approach to explicitly measure and test the adaptive advantage of programmed bacterial cell death in Escherichia coli," said Lingchong You, senior author of the study and an associate professor at the Department of Biomedical Engineering, Duke University, and the Duke Institute for Genome Sciences & Policy. "The system is tunable which means that the extent of altruistic death in the bacterial population can be increased. We are therefore able to control the extent of programmed cell death as well as test the benefits of altruistic death under different conditions." The lead author of the study is Yu Tanouchi, a graduate student in the Department of Biomedical Engineering. Anand Pai and Nicolas Buchler also contributed to the work.

Engineered bacteria can be used to demonstrate the conditions where programmed cell death becomes a distinct advantage for the survival of the bacterial population. 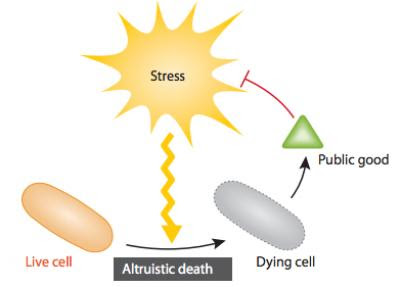 Scientists have known for some time that programmed cell death can be linked to the response of bacteria to stressful conditions, for example starvation of amino acids or the presence of competitor molecules. However, it is not clear why cells should choose to die under such conditions since it gives them no immediate advantages. Some researchers have suggested that programmed cell death allows cells to provide benefits to their survivors but until now it has been difficult to test this directly in experiments.

The researchers used synthetic biology procedures to engineer Escherichia coli in such a way that the bacterial cells are capable of suicidal behavior and promoting the good of the bacterial population. To do so they introduced a gene circuit, which consists of two modules, into the bacteria. If the "suicide module" is active it leads to the rupture and death of some bacterial cells when they are challenged with the antibiotic 6-aminopenicillanic acid. If the "public good" module is expressed, a modified form of the enzyme beta-lactamase is produced, which protects surviving cells from rupture or lysis by breaking down the antibiotic. This protection only occurs when the enzyme is released from inside the bacterial cells that make the ultimate sacrifice and die after rupture.

"Our results clearly demonstrate that it is possible to have conditions where the death of some bacteria confers an advantage for the overall population of bacteria," remarked You. "The optimal death rate for the bacterial population emerges after sufficient time has passed and is clearly visible in our system."

The scientists were also able to provide a possible explanation for the "Eagle effect", an unexpected phenomenon where bacteria appear to grow better when treated with higher antibiotic concentrations. "Overall our results fill in a conceptual gap in understanding the evolutionary dynamics of programmed bacterial death during stress and have implications for designing intervention strategies for effective treatment of bacterial infections with antibiotics," concluded You.

Further information on Molecular Systems Biology is available at http://www.nature.com/msb
on November 20, 2012