A Terrawatt Of Wave Power

This conceptual study focused on using Oscillating Wave Column (OWC) which is considered as the most efficient way to utilize sea waves, the largest power source on earth, to generate electricity. Previous studies have revealed that global wave power is estimated to be 1TW (1 terrawatt).

Countries where numerous seafronts surround the country could tap into an alternative source of power generation which could be generated by the waves during the different seasons of the year. In addition, the findings of this study could be adapted to evaluate the capability to produce electricity on shore such as from lakes and rivers with undulated waves. 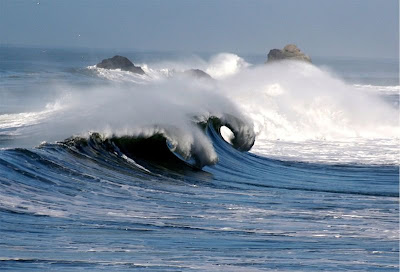 Researchers began the study with the derivation of mathematical equations for each component in the electrical generation system after taking into consideration the sea wave as the input to facilitate the workability of the entire system. The team of researchers verified the validity of the developed mathematical equations for each stage of the research. This was done to establish its workability. Electrical and mechanical relationships were derived to relate the workability of each component in the system for the purpose of electricity generation. Numerous experiments were conducted to optimize the results in this study which would eventually lead to the generation of electricity. The results obtained from the experiments indicated that the proposed model appears practical could be implemented.