The SpaceX Dragon cargo craft was released from the International Space Station’s robotic arm by the Expedition 33 crew at 9:29 a.m. EDT. Dragon will perform three burns to place it on a trajectory away from the station and begin its return trip to Earth.

A 10-minute, 40-second deorbit burn beginning at 2:28 p.m. will slow Dragon down for its descent, culminating in a parachute-assisted splashdown 250 miles off the coast of Baja California at 3:20 p.m. Dragon is the only space station cargo craft capable of returning a significant amount of supplies back to Earth, including experiments.

The SpaceX Dragon cargo craft maneuvers away from the International Space Station. 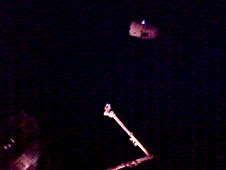 The ground team at Mission Control Houston remotely commanded the station’s robotic arm to uninstall Dragon from the Earth-facing port of the Harmony node at 7:19 a.m. after Expedition 33 Commander Suni Williams removed the bolts and latches of the Common Berthing Mechanism that had secured the cargo craft to the station since Oct 10.

A set of programmed commands to Canadarm2 then maneuvered Dragon out to the 15-meter release point, where Williams and Flight Engineer Aki Hoshide ungrappled Dragon and backed the arm away.