Rapid Changes In The Earth's Core, The Magnetic Field And Gravity Seen By Satellites

Annual to decadal changes in the earth's magnetic field in a region that stretches from the Atlantic to the Indian Ocean have a close relationship with variations of gravity in this area. From this it can be concluded that outer core processes are reflected in gravity data. This is the result presented by a German-French group of geophysicists in the latest issue of PNAS (Proceedings of the National Academy of Sciences of the United States).

Maps of the vertical downward component (sign-changed radial component) of the core magnetic field (A) and its secular variation (B) as estimated at the CMB from the GRIMM-3 model up to spherical harmonic degree 13.


The main field of the Earth's magnetic field is generated by flows of liquid iron in the outer core. The Earth's magnetic field protects us from cosmic radiation particles. Therefore, understanding the processes in the outer core is important to understand the terrestrial shield.
Credit: GFZ/Credit: Mandea et al. www.pnas.org/cgi/doi/10.1073/pnas.1207346109

Key to this are measurements of the geomagnetic field itself. A second, independent access could be represented by the measurement of minute changes in gravity caused by the fact that the flow in the liquid Earth's core is associated with mass displacements. The research group has now succeeded to provide the first evidence of such a connection of fluctuations in the Earth's gravity and magnetic field.


Evolution of the secular acceleration of the vertical downward component of the geomagnetic field computed at the Earth’s surface (as obtained from GRIMM-3 model), which evolves smoothly over the last decade. This animation shows a patch of acceleration migrating from India around 2003 to the
southwest of the Indian Ocean in 2008, while a strong patch of deceleration grows in the middle Atlantic to reach a maximum in 2006 and then vanishes rapidly. 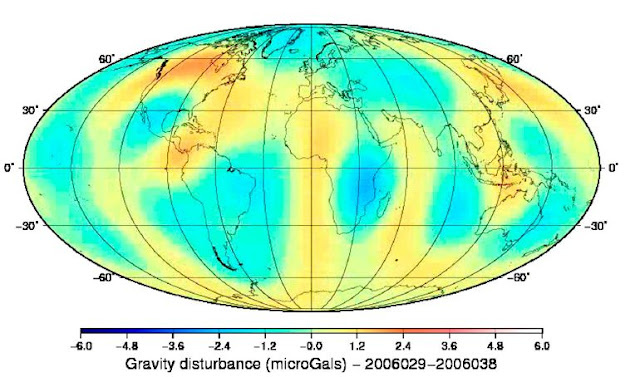 
They used magnetic field measurements of the GFZ-satellite CHAMP and extremely accurate measurements of the Earth's gravity field derived from the GRACE mission, which is also under the auspices of the GFZ. "The main problem was the separation of the individual components of the gravity data from the total signal," explains Vincent Lesur from the GFZ German Research Centre for Geosciences, who is involved in the study.

Computer simulation of the Earth's field in a normal period between reversals. The tubes represent magnetic field lines, blue when the field points towards the center and yellow when away. The rotation axis of the Earth is centered and vertical. The dense clusters of lines are within the Earth's core

A satellite only measures the total gravity, which consists of the mass fractions of Earth's body, water and ice on the ground and in the air. To determine the mass redistribution by flows in the outer core, the thus attained share of the total gravity needs to be filtered out. "Similarly, in order to capture the smaller changes in the outer core, the proportion of the magnetic crust and the proportion of the ionosphere and magnetosphere need to be filtered out from the total magnetic field signal measured by the satellite," Vincent Lesur explains. The data records of the GFZ-satellite missions CHAMP and GRACE enabled this for the first time.

Cutaway of the Earth showing the layers to the core

During the investigation, the team focused on an area between the Atlantic and the Indian Ocean, as the determined currents flows were the highest here. Extremely fast changes (so-called magnetic jerks) were observed in the year 2007 at the Earth's surface. These are an indication for sudden changes of liquid flows in the upper outer core and are important for understanding the magneto-hydrodynamics in the Earth's core. Using the satellite data, a clear signal of gravity data from the Earth's core could be received for the first time.


Fig. S2. Spatial and temporal scales of the physical processes causing mass variations in the Earth system. The searched-for core signals, the magnetic jerks, are shown in yellow (adapted from ref. 15). 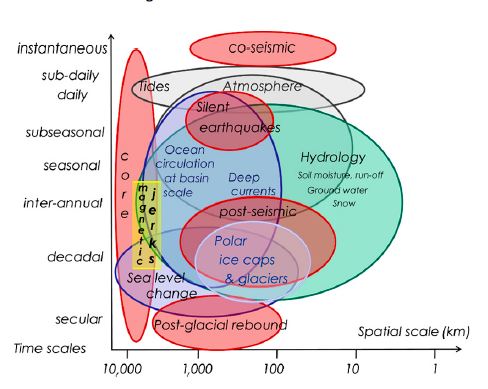 
This results in consequences for the existing conceptual models. Until now, for example, it was assumed that the differences in the density of the molten iron in the earth's core are not large enough to generate a measurable signal in the earth's gravitational field. The newly determined mass flows in the upper outer core allow a new approach to Earth's core hydrodynamics.