Like a movie star constantly retouching her makeup, the protoplanet Vesta is continually stirring its outermost layer and presenting a young face.

New data from NASA's Dawn mission show that a common form of weathering that affects many airless bodies like Vesta in the inner solar system, including the moon, surprisingly doesn't age the protoplanet's outermost layer.

This shows Vesta, as seen by by NASA's Dawn spacecraft. 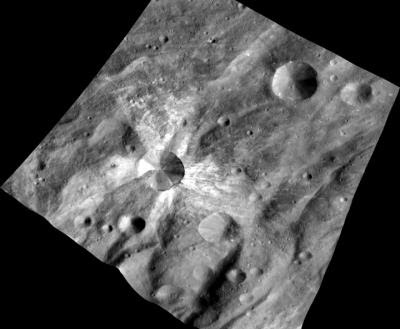 The data also indicate that carbon-rich asteroids have been splattering dark material on Vesta's surface over a long span of the body's history.

The findings are described in two papers published Nov. 1 in the journal Nature.

Over time, soils on the moon and on asteroids have undergone extensive weathering. Scientists see this in the accumulation of tiny metallic particles containing iron, which dulls the bright, fluffy outer layers of these bodies. Yet Dawn's visible and infrared mapping spectrometer (VIR) and framing camera detected no accumulation of these tiny particles on Vesta, and the protoplanet (sometimes called a giant asteroid) remains bright and pristine.

This shows Vesta, as seen by by NASA's Dawn spacecraft

Still, the bright rays of the youngest features on Vesta are seen to degrade rapidly and disappear into background soil. Scientists know that frequent, small impacts from asteroids and comets continually mix the fluffy outer layer of broken debris. Vesta also has unusually steep topography relative to other large bodies in the inner solar system, which leads to landslides that further mix the surface material.

Early pictures of Vesta showed a variety of dramatic light and dark splotches on Vesta's surface. These light and dark materials were unexpected and now show that Vesta has a brightness range that is among the largest observed on rocky bodies in our solar system.

Scientists initially theorized that the dark material on Vesta might come from the shock of high-speed impacts melting and darkening the underlying rocks or from recent volcanic activity. An analysis of data from VIR and the framing camera, however, has revealed that the distribution of dark material is widespread and occurs in both small spots and diffuse deposits, without correlation to any particular underlying geology. The likely source of the dark material is now shown to be carbon-rich asteroids, which are also believed to have deposited hydrated minerals on Vesta.

"Ever since Dawn arrived at Vesta [in July 2011] and we saw the bright and dark streaks across the surface, we have wondered how the zebra got her stripes," said Christopher T. Russell, a professor in UCLA's Department of Earth and Space Sciences and principal investigator for the Dawn mission. "Now we know that the bright streaks and spots are due to very pure early Vestan material, and the dark patches are deposits on the surface most probably due to collisions with material from the dark outer reaches of the asteroid belt."

Scientists estimate that to get the amount of darkening Dawn observed on Vesta, approximately 300 dark asteroids with diameters between 0.6 and 6 miles (1 and 10 kilometers) likely hit Vesta during the last 3.5 billion years. This would have been enough to wrap Vesta in a blanket of mixed material about 3 to 7 feet (1 to 2 meters) thick.

Launched Sept. 27, 2007, Dawn spent more than a year investigating Vesta, which is in the doughnut-shaped asteroid belt between Mars and Jupiter. Dawn orbited Vesta and observed the protoplanet's surface beginning in July 2011. It departed in September 2012.

Studies of meteorites found on Earth that are linked to Vesta suggest that Vesta formed from interstellar gas and dust during the solar system's first 2 to 5 million years.

"Vesta has been recording the history of the solar system from the beginning — more than 4.5 billion years ago," Russell said. "We're going back further than ever before on the surface of a body."

Dawn has a high-quality camera, along with a back-up; a visible and near-infrared mapping spectrometer to identify minerals on the surface; and a gamma ray and neutron spectrometer to reveal the abundance of elements such as iron and hydrogen, possibly from water, in the soil. Dawn also probed Vesta's gravity using extremely precise navigation.

The study of Vesta, however, is only half of Dawn's mission. The spacecraft is now on its way to the dwarf planet Ceres, where it will conduct a detailed study of Ceres' structure and composition. Vesta and Ceres are the most massive objects in the main asteroid belt between Mars and Jupiter. Ceres, the largest object in the main belt, could harbor substantial water or ice beneath its rock crust — and possibly life. The spacecraft will rendezvous with Ceres and begin orbiting in 2015, conducting studies and observations for at least five months.

"Ceres is the largest asteroid and one of the darker bodies in the belt," Russell said. "We will soon learn more about the dark materials that have added so many highlights to the face of Vesta."

Dawn, the second scientific mission to be powered by an advanced NASA technology known as ion propulsion, is the first NASA mission to orbit two solar system targets beyond the moon.

UCLA is in charge of Dawn's science and public outreach. Russell leads the science team that has the lead role in analyzing and interpreting the data from Dawn.

JPL manages the Dawn mission for NASA's Science Mission Directorate in Washington. Dawn is a project of the directorate's Discovery Program, managed by NASA's Marshall Space Flight Center in Huntsville, Ala. The University of California at Los Angeles (UCLA) is responsible for overall Dawn mission science. Orbital Sciences Corp. in Dulles, Va., designed and built the spacecraft. The German Aerospace Center, the Max Planck Institute for Solar System Research, the Italian Space Agency and the Italian National Astrophysical Institute are international partners on the mission team. The California Institute of Technology in Pasadena manages JPL for NASA.