An animation of satellite observations from Oct. 26-29, 2012, shows Hurricane Sandy move along the U.S. East coast and into the Mid-Atlantic and northeastern U.S. Sandy had still not made landfall by the end of this animation. This visualization was created by the NASA GOES Project at NASA Goddard Space Flight Center, Greenbelt, Md., using observations from NOAA's GOES-13 satellite.

On Monday, Oct. 29, Hurricane Sandy was ravaging the Mid-Atlantic with heavy rains and tropical storm force winds as it closed in for landfall. Earlier, NASA's CloudSat satellite passed over Hurricane Sandy and its radar dissected the storm get a profile or sideways look at the storm. NASA's Aqua satellite provided an infrared view of the cloud tops and NOAA's GOES-13 satellite showed the extent of the storm. The National Hurricane Center reported at 11 a.m. EDT on Oct. 29 that Hurricane Sandy is "expected to bring life-threatening storm surge and coastal hurricane winds plus heavy Appalachian snows."

NASA's CloudSat passed over Sandy at 10:32 a.m. EDT on Oct. 27, 2012. Light to moderate precipitation associated with parts of the outer bands of Hurricane Sandy were moving on shore into parts of North Carolina where CloudSat intersected the system. Cloudsat showed heavier showers and thunderstorms further south and east of the Atlantic coastline over the open water.

To understand the structure, extent and behavior of Sandy, NASA's CloudSat passed over Sandy at 1832 UTC (10:32 a.m. EDT) on Saturday, Oct. 27, 2012, when the storm was about 335.5 miles (540 km) southeast of Charleston, S.C. CloudSat data was used to create a profile image of Hurricane Sandy by Shigeru Suzuki at NASA's Jet Propulsion Laboratory, Pasadena, Calif.

At the time of the image Sandy's maximum sustained winds were near 75 mph and Sandy had a minimum pressure of 961 millibars making the storm a Category 1 hurricane. Hurricane Sandy was moving slowly to the northeast at 11 mph almost parallel to the southeast United States coast and directly traversing the Gulf Stream.

CloudSat passed over Sandy just west of the hurricane's inner core. Light to moderate precipitation associated with parts of the outer bands of Hurricane Sandy were moving on shore into parts of North Carolina where CloudSat intersected the system. CloudSat showed heavier showers and thunderstorms further south and east of the Atlantic coastline over the open water.

"The CloudSat signal tends to attenuate or dampen in these areas of heavier convection when rain drops become larger than 3 mm (0.11 inch) in diameter," said Natalie Tourville, a researcher who works with CloudSat data at the Cooperative Institute for Research in the Atmosphere at Colorado State University, Fort Collins, Colo. "The cloud shield associated with Hurricane Sandy extended well over 1,000 km from the storm center covering parts of eastern Kentucky and Tennessee and Virginia and West Virginia with mid and high level cloudiness areas of cirrus and altocumulus," she said.

Sandy Pounding the Mid-Atlantic on Oct. 29

On Oct. 29 at 1 a.m. EDT the National Hurricane Center (NHC) noted that the center of Hurricane Sandy was located near latitude 37.5 north and longitude 71.5 west. This was about 260 miles (415 km) south-southeast of New York City, and 205 miles (330 km) southeast of Atlantic City, N.J. Sandy was moving north-northwest at 18 mph. Maximum sustained winds have increased to 90 mph (140 kph). 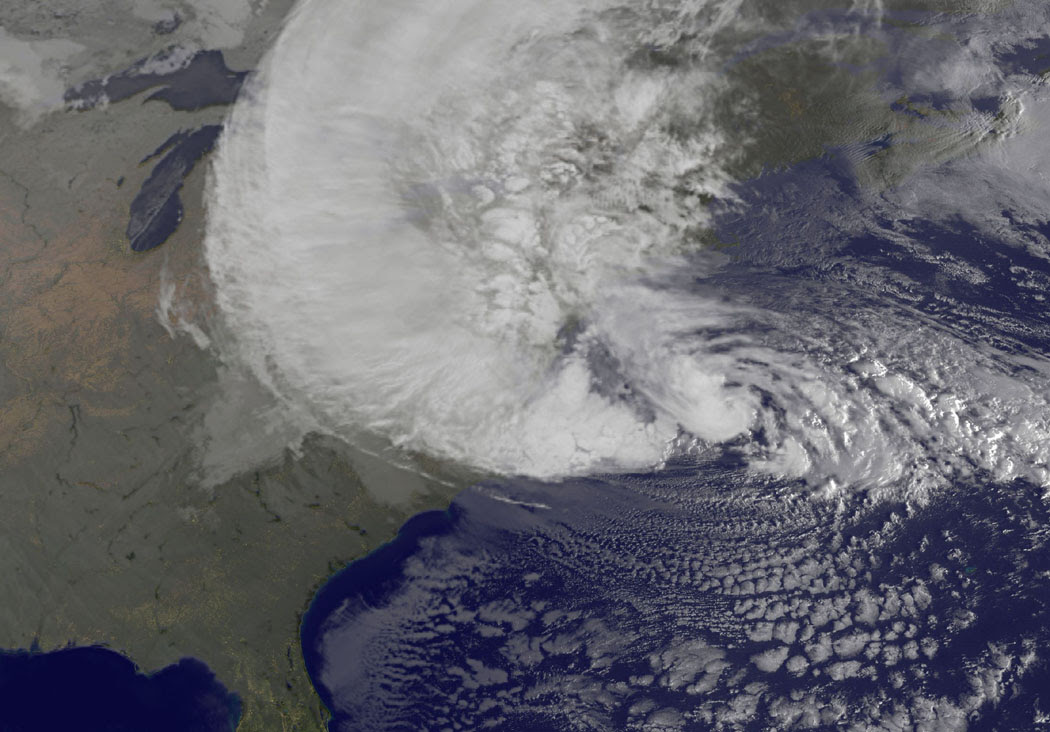 The minimum central pressure estimated from hurricane hunter Aircraft data is 943 millibars, which dropped from 946 millibars at 8 a.m. EDT. A drop in atmospheric pressure indicates intensification.

NHC noted that surge-related flooding depends on the relative timing of the surge and the tidal cycle and can vary greatly over short distances. Because of Sandy's large wind field, elevated water levels could span multiple tide cycles resulting in repeated and extended periods of coastal and bayside flooding. Dangerous surf conditions will continue from Florida through New England for the next couple of days.

The AIRS instrument aboard NASA's Aqua satellite captured infrared imagery of Hurricane Sandy on Monday, Oct. 29 at 0711 UTC (3:11 a.m. EDT) that showed some strong thunderstorms (purple) and the extent of Sandy's reach (blue) from the Carolinas into the Ohio Valley and eastern Canada. The thunderstorms in the purple areas were reaching high into the troposphere where cloud top temperatures are as cold as -63 Fahrenheit (-52 Celsius). 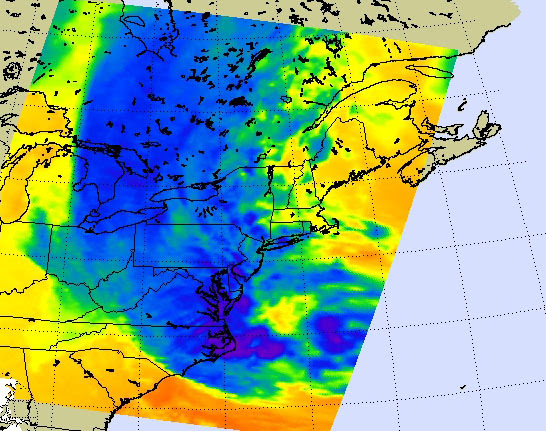 Infrared satellite imagery provides temperature data to forecasters that identify the cloud heights and strength of different parts of a storm. Basically, the higher the cloud top is, the colder the temperature, and the stronger the storm. Strongest storms have the potential for the heaviest rainfall rates.

To measure those cloud top temperatures, NASA uses the Atmospheric Infrared Sounder (AIRS) instrument aboard NASA's Aqua satellite. The AIRS instrument captured infrared imagery of Hurricane Sandy on Monday, Oct. 29 at 0711 UTC (3:11 a.m. EDT) that showed some strong thunderstorms and the extent of Sandy's reach from the Carolinas into the Ohio Valley and eastern Canada. The thunderstorms in the purple areas were reaching high into the troposphere where cloud top temperatures are as cold as -63 Fahrenheit (-52 Celsius).

At 11 a.m. EDT on Oct. 29, the National Hurricane Center said that Hurricane-force winds are expected along the U.S. East Coast between Chincoteague, Va.and Chatham, Mass. This Includes the Tidal Potomac from Cobb Island to Smith Point, the middle and upper Chesapeake Bay, Delaware Bay and the coasts of the northern Delmarva Peninsula, New Jersey, the New York City area, Long Island, Connecticut and Rhode Island.

Tropical-storm-force winds are expected north of Chatham to Merrimack River Mass., the lower Chesapeake Bay and south of Chincoteague, Va. to Duck, N.C., the northern endpoint of the Tropical Storm Warning.

Rain and Snow Expected from Sandy

Hurricane Sandy is expected to bring heavy rainfall to the Mid-Atlantic and northeastern U.S., and snowfall to the mountain areas. At 2:20 p.m. EDT on Sunday, Oct. 28, Hurricane Sandy was a marginal category 1 hurricane and its eyewall is modest, as TRMM reveals, which gives forecasters and scientists hints about its possible future strength.

The eyewall appeared somewhat compact with its 40 km (24.8 miles) diameter. The eyewall contained only relatively light precipitation, and none of Sandy's eyewall storm cells managed to burst through, or even reach, the tropopause which has about a 10 km (6.2 miles) height at mid-latitudes. Evidence of the weak updrafts in the eyewall comes from the fact that the TRMM radar's reflectivity stayed under 40 dBZ, a commonly cited signal strength at which updrafts can be vigorous enough to form hail and to lift smaller ice particles up through the tropopause and into the stratosphere.

But placed in context, the TRMM-observed properties of Hurricane Sandy's eyewall are evidence of remarkable vigor. Most hurricanes only have well-formed and compact eyewalls at category 3 strength or higher. Sandy was not only barely a category 1 hurricane, but Sandy was also experiencing strong wind shear, Sandy was going over ocean typically too cold to form hurricanes, and Sandy had been limping along as a marginal hurricane for several days.

Kelley said, "With infrared satellite observations used in imagery one can speculate about what the sort of convective (rising air that form the thunderstorms that make up a tropical cyclone) storms are developing under the hurricane's cloud tops, but Sandy was sneaking up the East Coast too far out at sea for land-based radars to provide definitive observations of the rain regions inside of the hurricane's clouds." The radar on the TRMM satellite could provide this missing information during this overflight of Hurricane Sandy.

The TRMM satellite also showed that the super-sized rainband that extended to the west and north of the center did contain vigorous storm cells, as indicated by the red regions of radar reflectivity in excess of 40 dBZ. This rainband is expected to lash the coast well before the hurricane's center make landfall. Even further west, at the upper left corner of the image, one can see two small storm cells. These storm cells are the southern-most tip of the independent weather system that is coming across the United States and that is expected to merge and possibly reinvigorate the remnants of Hurricane Sandy after Sandy makes landfall.

On Oct. 29 at 5 a.m. EDT the National Hurricane Center noted that the center of Hurricane Sandy was located near latitude 35.9 north and longitude 70.5 west. This was about 410 miles east southeast of Washington, D.C. Sandy was moving north at 15 mph and its winds had increased since Oct. 28. Maximum sustained winds are now near 85 mph. Tropical Storm force winds extend almost 500 miles from the center.

At 8 a.m. EDT on Oct. 29, the National Hurricane Center reported tropical-storm-force winds were occurring along the coasts of southern New Jersey Delaware and eastern Virginia and extend as far inland as the central and southern Chesapeake Bay.

Sandy is forecast to make landfall along the southern new jersey coast tonight. However sandy will severely impact the region well before it comes ashore.

TRMM stands for Tropical Rainfall Measuring Mission, and it is a joint mission between NASA and JAXA, the Japan Space Exploration Agency. Some of the questions about hurricanes left unanswered by the TRMM satellite will be explored by the Global Precipitation Measuring (GPM) satellite scheduled for launch in 2014. For more information, visit http://pmm.gsfc.nasa.gov.