Each of these images was captured from a different perspective by one of NASA's Solar Terrestrial Relations Observatory (STEREO) spacecraft on Oct. 14, 2012. The image on the left, STEREO-B, shows a dark vertical line slightly to the upper left of center. Only by looking at the image on the right, captured by STEREO-A from a different direction, is this feature revealed to be a giant prominence of solar material bursting through the sun's atmosphere. 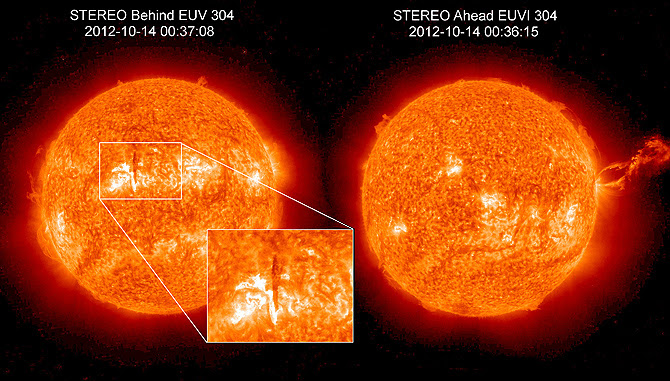 On the evening of Oct. 25, 2006, the twin Solar Terrestrial Relations Observatory (STEREO) spacecraft launched into space, destined for fairly simple orbits: both circle the sun like Earth does, STEREO-A traveling in a slightly smaller and therefore faster orbit, STEREO-B traveling in a larger and slower orbit. Those simple orbits, however, result in interesting geometry. As one spacecraft gained an increasing lead over Earth, the other trailed further and further behind. In February of 2011, each STEREO spacecraft was situated on opposite sides of the sun, and on Sept. 1, 2012, the two spacecraft and and the Solar Dynamics Observatory (at Earth) formed an equal-sided triangle, with each observatory providing overlapping views of the entire sun.

Since its launch in 2006, the STEREO spacecraft have drifted further and further apart to gain different views of the sun. 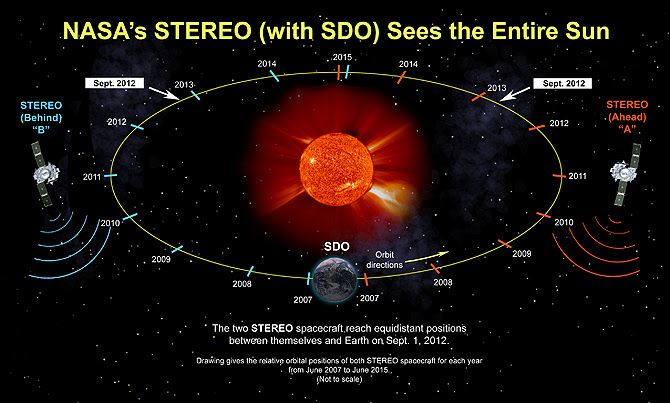 By providing such unique viewpoints, STEREO has offered scientists the ability to see all sides of the sun simultaneously for the first time in history, augmented with a view from Earth's perspective by NASA's Solar Dynamics Observatory (SDO). In addition to giving researchers a view of active regions on the sun before they even come over the horizon, combining two views is crucial for three-dimensional observations of the giant filaments that dance off the sun's surface or the massive eruptions of solar material known as coronal mass ejections (CMEs). Examine the images below to see how a feature on the sun can look dramatically different from two perspectives. 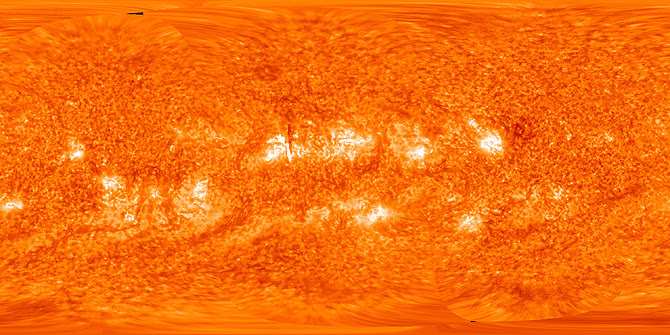