Mass Extinction When The Food Web Breaks Down

The Cretaceous Period of Earth history ended with a mass extinction that wiped out numerous species, most famously the dinosaurs. A new study now finds that the structure of North American ecosystems made the extinction worse than it might have been. Researchers at the University of Chicago, the California Academy of Sciences and the Field Museum of Natural History will publish their findings Oct. 29 online in the Proceedings of the National Academy of Sciences.

This illustration depicts the food web for ecological groups in the late Cretaceous Period as reported in a new paper published in the Proceedings of the National Academy of Sciences. Each ecological group includes a set of species that share the same set of potential predators and prey. Silhouettes show iconic members of each group. Arrows show who eats whom. 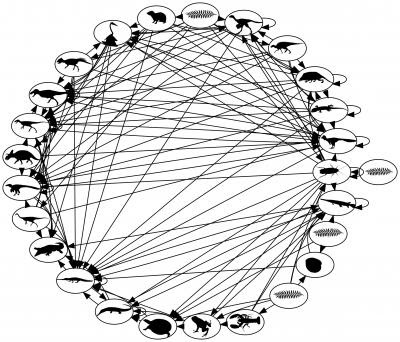 The mountain-sized asteroid that left the now-buried Chicxulub impact crater on the coast of Mexico's Yucatan Peninsula is almost certainly the ultimate cause of the end-Cretaceous mass extinction, which occurred 65 million years ago. Nevertheless, "Our study suggests that the severity of the mass extinction in North America was greater because of the ecological structure of communities at the time," noted lead author Jonathan Mitchell, a Ph.D. student of UChicago's Committee on Evolutionary Biology.

Imaging from NASA's Shuttle Radar Topography Mission STS-99 reveals part of the 180 kilometre (112 mi) diameter ring of the crater; clustered around the crater's trough are numerous sinkholes, suggesting a prehistoric oceanic basin in the depression left by the impact. 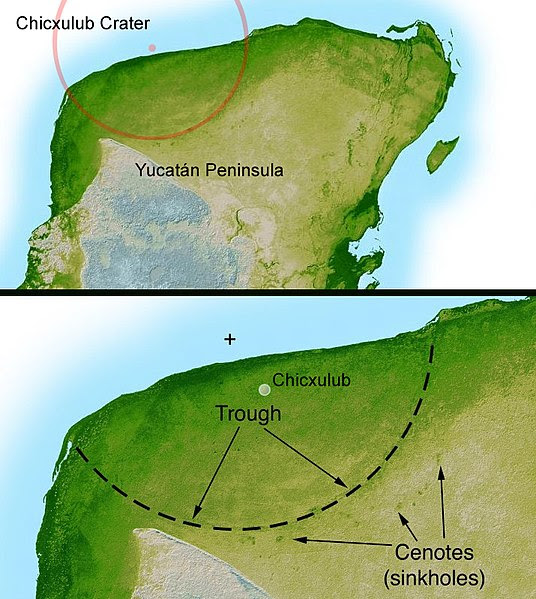 Mitchell and his co-authors, Peter Roopnarine of the California Academy of Sciences and Kenneth Angielczyk of the Field Museum, reconstructed terrestrial food webs for 17 Cretaceous ecological communities. Seven of these food webs existed within two million years of the Chicxulub impact and 10 came from the preceding 13 million years.

The findings are based on a computer model showing how disturbances spread through the food web. Roopnarine developed the simulation to predict how many animal species would become extinct from a plant die-off, a likely consequence of the impact.

"Our analyses show that more species became extinct for a given plant die-off in the youngest communities," Mitchell said. "We can trace this difference in response to changes in a number of key ecological groups such as plant-eating dinosaurs like Triceratops and small mammals."

The results of Mitchell and his colleagues paint a picture of late Cretaceous North America in which pre-extinction changes to food webs — likely driven by a combination of environmental and biological factors — results in communities that were more fragile when faced with large disturbances.

"Besides shedding light on this ancient extinction, our findings imply that seemingly innocuous changes to ecosystems caused by humans might reduce the ecosystems' abilities to withstand unexpected disturbances," Roopnarine said.

The team's computer model describes all plausible diets for the animals under study. In one run, Tyrannosaurus might eat only Triceratops, while in another it eats only duck-billed dinosaurs, and in a third it might eat a more varied diet. This stems from the uncertainty regarding exactly what Cretaceous animals ate, but this uncertainty actually worked to the study's benefit.

"Using modern food webs as guides, what we have discovered is that this uncertainty is far less important to understanding ecosystem functioning than is our general knowledge of the diets and the number of different species that would have had a particular diet," Angielczyk said.

Data derived from modern food webs helped the simulations account for such phenomena as how specialized animals tend to be, or how body size relates to population size and thus their probability of extinction.

The researchers also selected for their study a large number of specific food webs from all the specific webs possible in their general framework and evaluated how this sample of webs respond to a perturbation, such as the death of plants. They used the same relationships and assumptions to create food webs across all of the different sites, which means the differences between sites just stem from differences in the data rather than from the simulation itself. This makes the simulation a fundamentally comparative method, Roopnarine noted.

The computer models showed that if the asteroid hit during the 13 million years preceding the latest Cretaceous communities, there almost certainly would still have been a mass extinction, but one that likely would have been less severe in North America.

Most likely a combination of changing climate and other environmental factors caused some types of animals to become more or less diverse in the Cretaceous, the researchers concluded. In their paper they suggest that the drying up of a shallow sea that covered part of North America may have been one of the main factors leading to the observed changes in diversity.

Artist's impression of a major impact event. The collision between a planet and an asteroid a few kilometers in diameter may release as much energy as several million nuclear weapons detonating simultaneously. 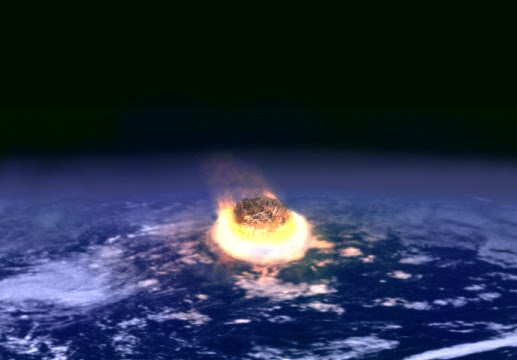 The study has implications for modern conservation efforts, Angielczyk observed.

"Our study shows that the robustness or fragility of an ecosystem under duress depends very much on both the number of species present, as well as the types of species," he said, referring to their ecological function. The study also shows that more is not necessarily better, because simply having many species does not insure against ecosystem collapse.

"What you have is also important," Angelczyk said. "It is therefore critical that conservation efforts pay attention to ecosystem functioning and the roles of species in their communities as we continue to degrade our modern ecosystems."

Contacts and sources:
Steve Koppes
University of Chicago
on October 29, 2012