Highest Pressure Every Created On Earth, As High As Core Of Uranus

The study of materials at extreme conditions took a giant leap forward with the discovery of a way to generate super high pressures without using shock waves whose accompanying heat turns solids to liquid.

Schematic drawing of the double-stage diamond anvil cell assembly. The typical diameter of nano crystalline diamond semi-balls seen in the center of the drawing is 12-20 micrometers. The starting size of the sample is about three to four micrometers in diameter and about three micrometers thick. 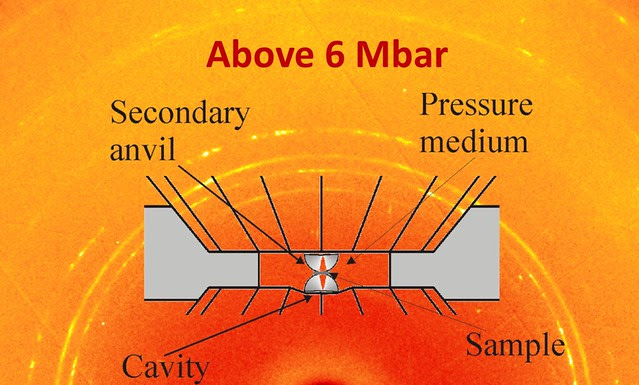 This discovery will allow scientists for the first time to reach static pressure levels exceeding four million atmospheres, a high-pressure environment where new unique compounds could be formed, materials change their chemical and physical properties and metals become insulators. An international team of scientists using a new high-pressure anvil design and technique in conjunction with high-energy X-rays was able to create 640 gigapascals, or GPas, of pressure. This is 50 percent more pressure than previously demonstrated and 150 percent more pressure than accessible by typical high-pressure experiments.

Pressures at this level have vast ramifications for earth science, cosmology, chemistry, shock physics and material science. Static pressure of 640 GPa is six million times the pressure of the air at the Earth’s surface and more than one and a half times the pressure at the center of the Earth. Research at these pressures could lead to new revelations about how the Earth evolved and how iron, the most abundant material inside the Earth’s core, functions at extremes.

This new super-high-pressure capability was developed by scientists from the University of Bayreuth in Germany, the University of Chicago and the University of Antwerp in Belgium. The physical properties of tiny materials (less than one micron thick) were investigated in situ at ultra-high pressures with high-resolution micro X-ray diffraction techniques at the GeoSoilEnviro Consortium for Advanced Radiation Sources, or GSECARS, a beamline operated by the University of Chicago at the U.S. Department of Energy’s Advanced Photon Source at Argonne National Laboratory. Details appear today in the article "Implementation of micro-ball nanodiamond anvils for high-pressure studies above 6Mbar” in the journal Nature Communications.

"The ability to do static experiments at this pressure range has only been theorized about," said Vitali Prakapenka, an author on the paper and scientist at the Center for Advanced Radiation Sources at the University of Chicago. "We aren't stopping here. We expect to increase the accessible pressure range close to one terapascal, or 10 megabars, to probe materials at conditions corresponding to the core of gas giant planets, such as Uranus and Neptune, which have pressures of about seven megabars.”

Previous studies have been limited because the only way to reach such high pressures was to use dynamic compression (shockwaves), which also generate high temperatures and only nanoseconds of observation time. The discovery of a way to apply static pressures allows experimental studies of physical and chemical properties of materials in situ at high pressures with a number of various techniques to test long-held theories, including metallization of hydrogen.

“This new technique could revolutionize the study of high-pressure science,” said Leonid Dubrovinsky, one of the paper’s authors and a scientist at the University of Bayreuth.

Since the late 1950s, scientists have been using diamond anvil cells to generate extreme pressures to test the durability of materials, to create new properties of materials, such as superconductivity, and to replicate high-pressure conditions of planetary interiors. Yet, until now, scientists have struggled to reach pressures of the Earth's inner core, which is 320 to 360 GPa. Only a handful of experiments have been reported at these pressures, and the maximum achieved pressure had been about 420 GPa.

Scientists were able to triple the normal experiment pressure level by adding a second set of micro-anvils (10-20 microns in diameter) between two gem-quality single-crystal diamond anvils of about one-quarter of a carat each. This secondary anvil is made of superhard nanocrystalline diamond semi-balls fabricated from glassy carbon using newly developed technique in a large volume press at high pressure and temperature.

"The nanocrystalline diamond balls have very high yield strength and are less compressible and less brittle than single-crystal diamonds," said Natalia Dubrovinskaia, one of the paper’s authors and a scientist at the University of Bayreuth. "That allows us to drastically extend the achievable pressure range using micro-balls as second stage anvils."

The GSECARS beamline is available for use through the general user proposal process at the APS.
on October 28, 2012