We have all seen nature shows with footage of bighorn sheep rearing up and "butting heads" with each other using their heads and enlarged horns. People often assume other animals with horns and comparable head structures have similar behaviors. For a long time this was the case for the dome-headed dinosaurs, the pachycephalosaurids (pack-y-sef-a-lo-sore-ids), who were thought to use their thick, domed skulls in fights and mating displays. But new research presented at the recent Society of Vertebrate Paleontology meetings shows that, as is often the case with animal behaviors, the situation is more complex for both living horned animals and the extinct dinosaurs.

Joseph Peterson and Collin Dischler, both of the University of Wisconsin-Oshkosh, began by looking at living bovids, which are hoofed animals with horns that include goats and sheep. They noted that these animals all use their horns differently in displays and contests over mates. "They all have different horn shapes for different fighting styles," said Peterson. Bighorn and Dall sheep "butt heads," but American bison just "head shove" without big impacts. Domestic and mountain goats "flank butt," hitting each other on the hips and sides. 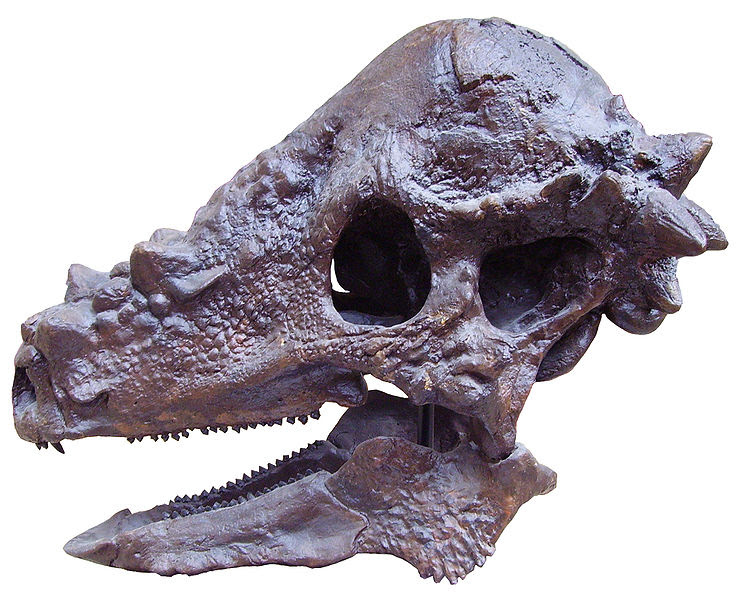 The researchers discovered differences in the pattern of injuries on the skulls of different types of pachycephalosaurids. "Tall, high-peaked dome specimens that possess injuries typically show a high abundance of injuries to the back of the skull while lower, flat, or broad domes show a high abundance of injuries on the front of the skull." These injuries imply that larger-domed pachycephalosaurids were probably "head-butters" or "head-shovers," whereas smaller but higher-domed species were "flank-butters."

“This is the first time that anyone has looked at a whole bunch of fossils from dome-headed dinosaurs to identify possible injuries from head-butting. Despite decades of work, many of the previous interpretations of behavior in dome-headed dinosaurs have been based on limited samples or single lines of evidence,” said Andrew Farke of the Raymond M. Alf Museum of Paleontology, who was not involved in the study but has studied the heads of dinosaurs.

Like many paleontological studies that try to understand the behavior of extinct organisms, this study used data from modern animals to make inferences about the past. "The present is the key to the past" is often the paleontologist's credo, and this study used that practice to reveal a more complex, and interesting, picture about one of the more iconic dinosaur groups.

Society of Vertebrate Paleontology
Prepared by members of the SVP Media Liaison Committee for use at the SVP 72nd Annual Meeting.
on October 23, 2012