Detecting Ripples In Space-Time From The Big Bang Soon Possible

Einstein predicted gravity waves in his general theory of relativity, but to date these ripples in the fabric of space-time have never been observed. Now a scientific research technique called Atomic Interferometry is trying to re-write the canon.
In conjunction with researchers at Stanford University, scientists at NASA Goddard are developing a system to measure the faint gravitational vibrations generated by movement of massive objects in the universe. The scientific payoff could be important, helping better clarify key issues in our understanding of cosmology. But application payoff could be substantial, too, with the potential to develop profound advances in fields like geolocation and timekeeping. In this video we examine how the system would work, and the scientific underpinnings of the research effort.

A pioneering technology capable of atomic-level precision is now being developed to detect what so far has remained imperceptible: gravitational waves or ripples in space-time caused by cataclysmic events including even the Big Bang itself. 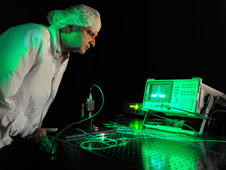 A team of researchers at NASA's Goddard Space Flight Center in Greenbelt, Md., Stanford University in California, and AOSense, Inc., in Sunnyvale, Calif., recently won funding under the NASA Innovative Advanced Concepts (NIAC) program to advance atom-optics technologies. Some believe this emerging, highly precise measurement technology is a technological panacea for everything from measuring gravitational waves to steering submarines and airplanes.

"I've been following this technology for a decade," said Bernie Seery, a Goddard executive who was instrumental in establishing Goddard's strategic partnership with Stanford University and AOSense two years ago. "The technology has come of age and I'm delighted NASA has chosen this effort for a NIAC award," he said.

The NIAC program supports potentially revolutionary, high-risk technologies and mission concepts that could advance NASA's objectives. "With this funding and other support, we can move ahead more quickly now, Seery said, adding that the U.S. military has invested heavily in the technology to dramatically improve navigation. "It opens up a wealth of possibilities."

Although the researchers believe the technology offers great promise for a variety of space applications, including navigating around a near-Earth asteroid to measure its gravitational field and deduce its composition, so far they have focused their efforts on using Goddard and NASA Research and Development seed funding to advance sensors that could detect theoretically predicted gravitational waves.

Cataclysmic events, such as this artist's rendition of a binary-star merger, are believed to create gravitational waves that cause ripples in space-time. 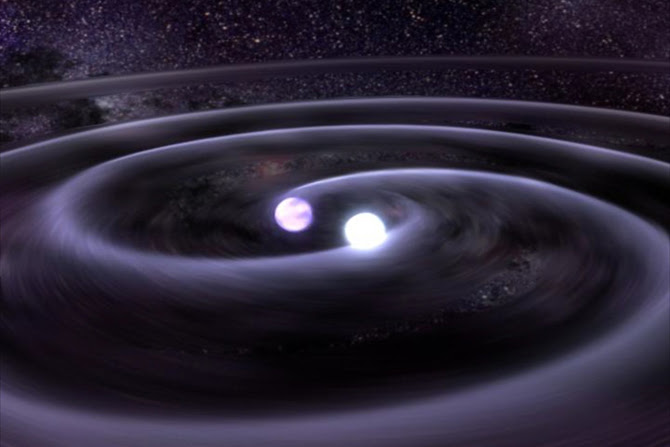 
Predicted by Albert Einstein's general theory of relativity, gravitational waves occur when massive celestial objects move and disrupt the fabric of space-time around them. By the time these waves reach Earth, they are so weak that the planet expands and contracts less than an atom in response. This makes their detection with ground-based equipment more challenging because environmental noise, like ocean tides and earthquakes, can easily swamp their faint murmurings.

Although astrophysical observations have implied their existence, no instrument or observatory, including the ground-based Laser Interferometer Gravitational-Wave Observatory, has ever directly detected them.

Should scientists confirm their existence, they say the discovery would revolutionize astrophysics, giving them a new tool for studying everything from inspiralling black holes to the early universe before the fog of hydrogen plasma cooled to give way to the formation of atoms.

The team believes atom optics or atom interferometry holds the key to directly detecting them.

Atom interferometry works much like optical interferometry, a 200-year-old technique widely used in science and industry to obtain highly accurate measurements. It obtains these measurements by comparing light that has been split into two equal halves with a device called a beamsplitter. One beam reflects off a mirror that is fixed in place; from there, it travels to a camera or detector. The other shines through something scientists want to measure. It then reflects off a second mirror, back through the beamsplitter, and then onto a camera or detector.

Because the path that one beam travels is fixed in length and the other travels an extra distance or in some other slightly different way, the two light beams overlap and interfere when they meet up, creating an interference pattern that scientists inspect to obtain highly precise measurements.

Atom interferometry, however, hinges on quantum mechanics, the theory that describes how matter behaves at sub-microscopic scales. Just as waves of light can act like particles called photons, atoms can be cajoled into acting like waves if cooled to near absolute zero. At those frigid temperatures, which scientists achieve by firing a laser at the atom, its velocity slows to nearly zero. By firing another series of laser pulses at laser-cooled atoms, scientists put them into what they call a "superposition of states."

Shown here is the Goddard-designed breadboard laser system critical to advancing atom-optics instruments. The device will be tested in the Stanford University drop tower. 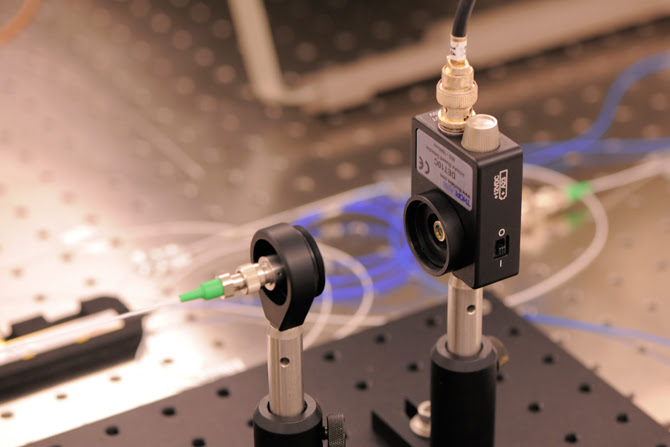 In other words, the atoms have different momenta permitting them to separate spatially and be manipulated to fly along different trajectories. Eventually, they cross paths and recombine at the detector — just as in a conventional interferometer. "Atoms have a way of being in two places at once, making it analogous to light interferometry," said Mark Kasevich, a Stanford University professor and team member credited with pushing the frontiers of atom optics.

The power of atom interferometry is its precision. If the path an atom takes varies by even a picometer, an atom interferometer would be able to detect the difference. Given its atomic-level precision, "gravitational-wave detection is arguably the most compelling scientific application for this technology in space," said physicist Babak Saif, who is leading the effort at Goddard.

Since joining forces, the team has designed a powerful, narrowband fiber-optic laser system that it plans to test at one of the world's largest atom interferometers — a 33-foot drop tower in the basement of a Stanford University physics laboratory. Close scientifically to what the team would need to detect theoretical gravitational waves, the technology would be used as the foundation for any atom-based instrument created to fly in space, Saif said.

The 33-foot drop tower at Stanford University will be used to test a Goddard-designed laser system that could be used in future atom-optics instruments. 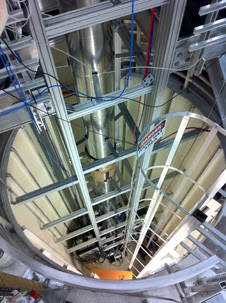 During the test, the team will insert a cloud of neutral rubidium atoms inside the 33-foot tower. As gravity asserts a pull on the cloud and the atoms begin to fall, the team will use its new laser system to fire pulses of light to cool them. Once in the wave-like state, the atoms will encounter another round of laser pulses that allow them to separate spatially. Their trajectories then can be manipulated so that their paths cross at the detector, creating the interference pattern.

The team also is fine-tuning a gravitational-wave mission concept it has formulated. Similar to the Laser Interferometer Space Antenna (LISA), the concept calls for three identically equipped spacecraft placed in a triangle-shaped configuration. Unlike LISA, however, the spacecraft would come equipped with atom interferometers and they would orbit much closer to one another — between 500 and 5,000 kilometers apart, compared with LISA's five-million-kilometer separation. Should a gravitational wave roll past, the interferometers would be able to sense the miniscule movement.

"I believe this technology will eventually work in space," Kasevich said. "But it presents a really complicated systems challenge that goes beyond our expertise. We really want to fly in space, but how do you fit this technology onto a satellite? Having something work in space is different than the measurements we take on Earth."

That's where Goddard comes in, Saif said. "We have experience with everything except the atom part," he said, adding that AOSense already employs a team of more than 30 physicists and engineers focused on building compact, ruggedized atom-optics instruments. "We can do the systems design; we can do the laser. We're spacecraft people. What we shouldn't be doing is reinventing the atomic physics. That's our partners' forte."