The verdict and prison sentences delivered on 22 October in the trial of six Italian scientists and one
government official charged with manslaughter in connection with the L'Aquila earthquake are troublingand could ultimately be harmful to international efforts to understand natural disasters and mitigate associated risk.

While the facts of the L'Aquila case are complex, the unfettered exchange of data and information, as
well as the freedom and encouragement to participate in open discussions and to communicate results,
are essential to the success of any type of scientific research. For scientists to be effective, they must be able to make good faith efforts to present the results of their research without the risk of prosecution.

Outcomes such as the one seen in Italy could ultimately discourage scientists from advising their
governments, from communicating the results of their research to the public, or even from studying and working in various fields of science.

The most appropriate response to natural disasters such as the L'Aquila earthquake is a renewed commitment on the part of scientists, engineers, and government officials to continue working together to more accurately understand and communicate the best available science and information for what can be done to protect the public.

Defying assertions that earthquakes cannot be predicted, an Italian court convicted seven scientists and experts of manslaughter Monday for failing to adequately warn residents before a temblor struck central Italy in 2009 and killed more than 300 people.

The court in L’Aquila also sentenced the defendants to six years each in prison. All are members of the national Great Risks Commission, and several are prominent scientists or geological and disaster experts. 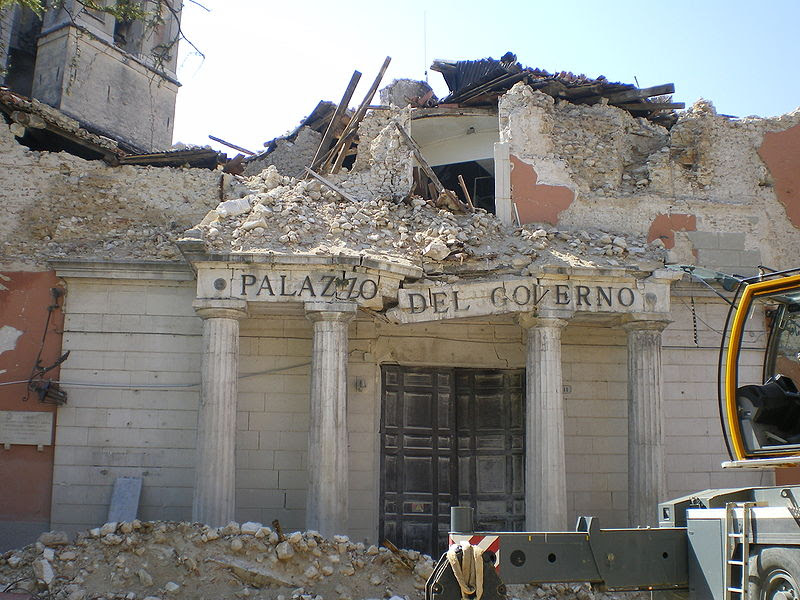 The 2009 L’Aquila earthquake occurred in the region of Abruzzo, in central Italy. The main shock occurred at 3:32 local time (1:32 UTC) on 6 April 2009, and was rated 5.8 on the Richter scale and 6.3 on the moment magnitude scale; its epicentre was near L’Aquila, the capital of Abruzzo, which together with surrounding villages suffered most damage. There have been several thousand foreshocks and aftershocks since December 2008, more than thirty of which had a Richter magnitude greater than 3.5.

The earthquake was felt throughout central Italy; 308 people are known to have died,[3] making this the deadliest earthquake to hit Italy since the 1980 Irpinia earthquake. 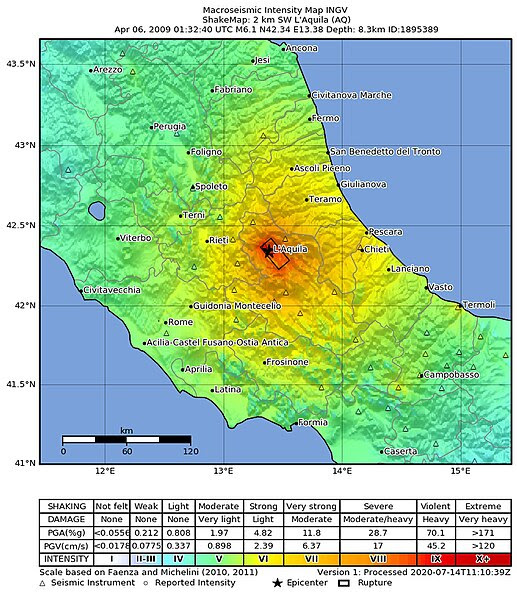 Italy frequently experiences earthquakes, but it is uncommon for them to be very deadly. The last major earthquake was the 5.9-magnitude 2002 Molise earthquake which killed 30 people, 26 of the victims children who perished in the collapse of an elementary school in San Giuliano di Puglia, and was the deadliest quake in 20 years. Earthquakes mark the history of L’Aquila, a city built on the bed of an ancient lake, providing a soil structure that amplifies seismic waves. The city was struck by earthquakes in 1315, 1349, 1452, 1501, 1646, 1703, and 1706.[9] The earthquake of February 1703, which caused devastation across much of central Italy, largely destroyed the city and killed around 5,000 people

This earthquake was caused by movement on a NW-SE trending normal fault according to moment tensor solutions. Although Italy lies in a tectonically complex region, the central part of the Apennines has been characterised by extensional tectonics since the Pliocene epoch (i.e. about the last 5 million years), with most of the active faults being normal in type and NW-SE trending. The extension is due to the back-arc basin in the Tyrrhenian Sea opening faster than the African Plate is colliding with the Eurasian Plate.

Poor building standards or construction materials seem to have further contributed to the large number of victims. According to firefighters and other rescuers, some concrete elements of the fallen buildings “seemed to have been made poorly, possibly with sand”. An official at Italy’s Civil Protection Agency, Franco Barberi, said that “in California, an earthquake like this one would not have killed a single person”.According to Italian media, L’Aquila’s chief prosecutor has opened a probe into possible criminal blame for the collapses.

Many people reported seeing peculiar sightings of light glows, flashes, lightning, flames and fireballs, all of which were considered candidates for earthquake light. 241 luminous phenomena were collected including photos and videos. At least 99 of such phenomena occurred before the main shock and other strong events of the seismic sequence, whereas globular lights, luminous clouds and diffused light were more frequent before the quakes. Flashes were mostly observed during the main shock. Electrical discharges and flames were observed principally after the main shock. Many luminous events were observed before and after the main shock without the ground shaking and were very similar to those reported about two centuries ago. An earthquake alarm system has been proposed, based on a video sensing network to capture EQL and provide a warning if observations
on October 23, 2012