Unprecedented! Population Aging Will Have Long-Term Implications For Economy

The aging of the U.S. population will have broad economi consequences for the country, particularly for federal programs that support the elderly, and its long-term effects on all generations will be mediated by how -- and how quickly -- the nation responds, says a new congressionally mandated report Aging and the Macroeconomy: Long-Term Implications of an Older Population from the National Research Council. The unprecedented demographic shift in which people over age 65 make up an increasingly large percentage of the population is not a temporary phenomenon associated with the aging of the baby boom generation, but a pervasive trend that is here to stay. 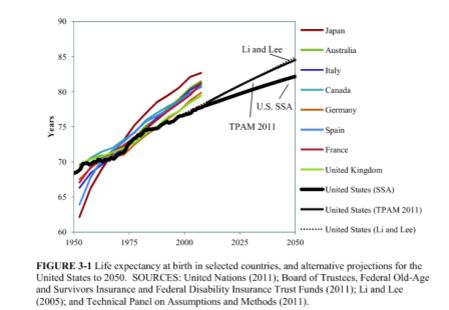 "The bottom line is that the nation has many good options for responding to population aging," said Roger Ferguson, CEO of TIAA-CREF and co-chair of the committee that wrote the report. "Nonetheless, there is little doubt that there will need to be major changes in the structure of federal programs, particularly those for health. The transition to sustainable policies will be smoother and less costly if steps are taken sooner rather than later."

Social Security, Medicare, and Medicaid are on unsustainable paths, and the failure to remedy the situation raises a number of economic risks, the report says. Together, the cost of the three programs currently amounts to roughly 40 percent of all federal spending and 10 percent of the nation's gross domestic product. Because of overall longer life expectancy and lower birth rates, these programs will have more beneficiaries with relatively fewer workers contributing to support them in the coming decades. Combined with soaring health care costs, population aging will drive up public health care expenditures and demand an ever-larger fraction of national resources.

Population aging is also occurring in other industrialized nations, so any consequences for the U.S. must be considered in the broader context of a global economy. Adapting to this new economic landscape entails costs and policy options with different implications for which generations will bear the costs or receive the benefits. Recent policy actions have attempted to address health care costs, but their effects are as yet unclear. According to the report, the ultimate national response will likely be some combination of major structural changes to public support programs, more savings during people's working years, and longer working lives.

"The nation needs to rethink its outlook and policies on working and retirement," said Ronald Lee, professor of demography and economics at the University of California, Berkeley, and committee co-chair. "Although 65 has conventionally been considered a normal retirement age, it is an increasingly obsolete threshold for defining old age and for setting benefits for the elderly." The committee found that there is substantial potential for increased labor force participation at older ages, which would boost national output, slow the draw-down on retirement savings, and allow workers to save longer. The report adds that longer working lives would have little effect on employment opportunities for younger workers, productivity, or innovation.

In addition, workers can better prepare for retirement by planning ahead and adapting their saving and spending habits, the report suggests. Improved financial literacy will be critical, since between one-fifth and two-thirds of today's older population have not saved enough for retirement and therefore rely heavily on Social Security and Medicare.

More research in areas such as health measurement and projections, capacity to work, and changes in consumption and saving will help to inform decision making, but the report emphasizes the need to act now in order to craft a balanced response.

"Population aging does not pose an insurmountable challenge provided that sensible policies are implemented with enough lead time to allow people, companies, and other institutions to respond," Ferguson said.

A follow-up study from the National Research Council will look more in-depth at the long-term macroeconomic effects of population aging and provide quantitative assessments of specific policy choices.

Aging and the Macroeconomy: Long-Term Implications of an Older Population are available from the National Academies Press