Mystery Of Why The Sun Will Explode

Scientists are moving closer to explaining why the sun will continue to explode causing  coronal mass ejections as their understanding on the inner workings of our star deepens.

Four decades of active research and debate by the solar physics community have failed to bring consensus on what drives the sun’s powerful coronal mass ejections (CMEs) that can have profound “space weather” effects on Earth-based power grids and satellites in near-Earth geospace.

A computer visualization of the sun (red sphere) and its magnetic field lines (orange and aquamarine). The close-up shows the final stage of the emergence of magnetic fields from under the solar surface and the associated X-ray emissions. This sophisticated computer model is used to investigate the drivers of harmful space weather phenomena, including coronal mass ejections.

In a paper just published in Nature Physics, an international team of space scientists, including a researcher from the University of New Hampshire’s Space Science Center (SSC), explains the mysterious physical mechanisms underlying the origin of CMEs. Their findings, based on state-of-the-art computer simulations, show the intricate connection between motions in the sun’s interior and these eruptions and could lead to better forecasting of hazardous space weather conditions.

CMEs are clouds of magnetic fields and plasma ­– a hot gas composed of charged particles.The fastest and most powerful of these events can explode from the sun at speeds of more than a million miles per hour and release more energy than the current worldwide stockpile of nuclear weapons.

“By studying CMEs we learn not only about the drivers of space weather but also about the structure of the atmosphere of the sun and other sun-like stars,” says lead author Ilia Roussev of the Yunnan Astronomical Observatory, Chinese Academy of Sciences (CAS) and the Institute for Astronomy at the University of Hawaii at Manoa. 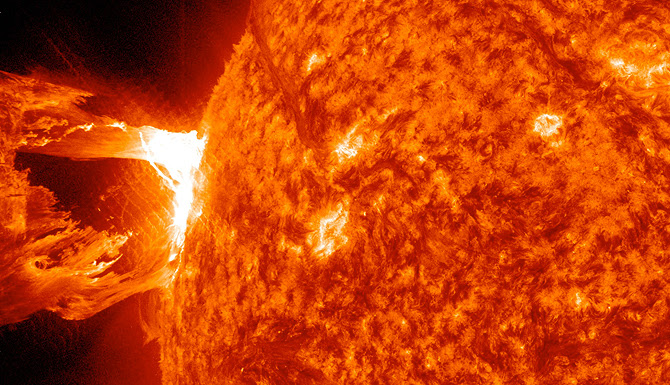 Geomagnetic storms caused by CMEs can disrupt power grids, satellites that operate global positioning systems and telecommunication networks, pose a threat to astronauts in outer space, lead to rerouting of flights over the polar regions, and cause spectacular auroras. The storms occur when a solar eruption hits Earth’s protective magnetic bubble, or magnetosphere.

The Nature Physics paper, titled “Explaining fast ejections of plasma and exotic X-ray emission from the solar corona,” provides an explanation of the origin of fast ejections of magnetized plasma from the sun’s atmosphere and associated X-ray emissions. It thus demonstrates a fundamental connection between the magnetic processes inside the sun’s interior and the formation of CMEs.

“Through this type of computer modeling we are able to understand how invisible bundles of magnetic field rise from under the surface of the sun into interplanetary space and propagate towards Earth with potentially damaging results”, says SSC researcher Noé Lugaz of the UNH Institute for the Study of Earth, Oceans, and Space. He adds, “These fundamental phenomena cannot be observed even with the most advanced instruments on board NASA satellites but they can be revealed by numerical simulations.”

A long-standing goal of the solar physics community has been the forecasting of solar eruptions and predictions of their impact on the Earth. In the paper, the authors note, “the model described here enables us not only to capture the magnetic evolution of the CME, but also to calculate the increased X-ray flux directly, which is a significant advantage over the existing models.”

The researchers in their article at Nature Physics present a model of the dynamics of the solar atmosphere and inner solar wind region using a realistic representation of the electric field at the photosphere, calculated from flux-emergence computer simulations, as the boundary conditions. From this, we show how magnetic flux and helicity injection leads to the reorganization of the solar corona. We show evidence for the in situ formation of a CME plasmoid, which is independent of the emerging flux tube, and we conclusively connect this process to the formation of a hot X-ray structure.

Layers of the Sun: This graphic shows a model of the layers of the Sun, with approximate mileage ranges for each layer: for the inner layers, the mileage is from the sun's core; for the outer layers, the mileage is from the sun's surface. The inner layers are the Core, Radiative Zone and Convection Zone. The outer layers are the Photosphere, the Chromosphere, the Transition Region and the Corona. 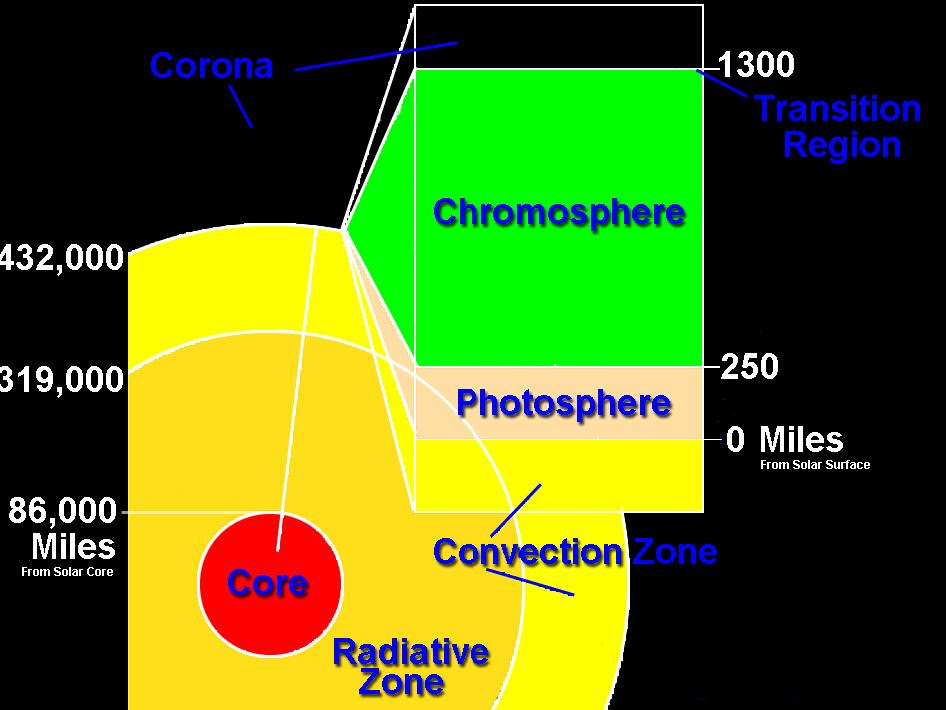 The work was supported by a CAS grant and two National Science Foundation grants in the U.S. – one at the University of Hawaii and another at UNH. In addition to Roussev and Lugaz, the international team includes Klaus Galsgaard from the Niels Bohr Institute in Denmark, Cooper Downs from Predictive Science, Inc. in California, Igor Sokolov from the University of Michigan, Jun Lin from the Yunnan Astronomical Observatory, and Elena Moise from the Institute of Geodynamics of the Romanian Academy of Science.

Contacts and sources:
Ilia Roussev
Noé Lugaz
University of New Hampshire
Klaus Galsgaard
David Sims
Institute for the Study of Earth, Oceans, and Space The Nature Physics paper can be viewed at
http://www.nature.com/nphys/journal/vaop/ncurrent/pdf/nphys2427.pdf

The University of New Hampshire, founded in 1866, is a world-class public research university with the feel of a New England liberal arts college. A land, sea, and space-grant university, UNH is the state's flagship public institution, enrolling 12,200 undergraduate and 2,300 graduate students.