Life And Ice From The Solar System's Edge, Ingredients For Primordial Life From Deep Space

Would you like icy organics with that? Maybe not in your coffee, but researchers at NASA's Jet Propulsion Laboratory in Pasadena, Calif., are creating concoctions of organics, or carbon-bearing molecules, on ice in the lab, then zapping them with lasers. Their goal: to better understand how life arose on Earth.

Researchers are brewing up icy, organic concoctions in the lab to mimic materials at the edge of our solar system and beyond. The laboratory equipment at NASA's Jet Propulsion Laboratory in Pasadena, Calif., is seen at right, and a very young solar system, with its swirling planet-forming disk, is shown in the artist's concept below.

Scientists think that ice grains from the far reaches of our solar system, and even farther out in the frigid space between stars, ultimately made their way to Earth by "hitching" rides on comets. The ice is thought to have contained the ingredients necessary to kick start life -- water and organic, or carbon-bearing, materials. New research from the JPL lab pictured here reveals that early processing of that organic material -- a biochemical step needed to ultimately form the building blocks of life -- took place in the coldest reaches of our solar system, at colder temperatures than previously thought. 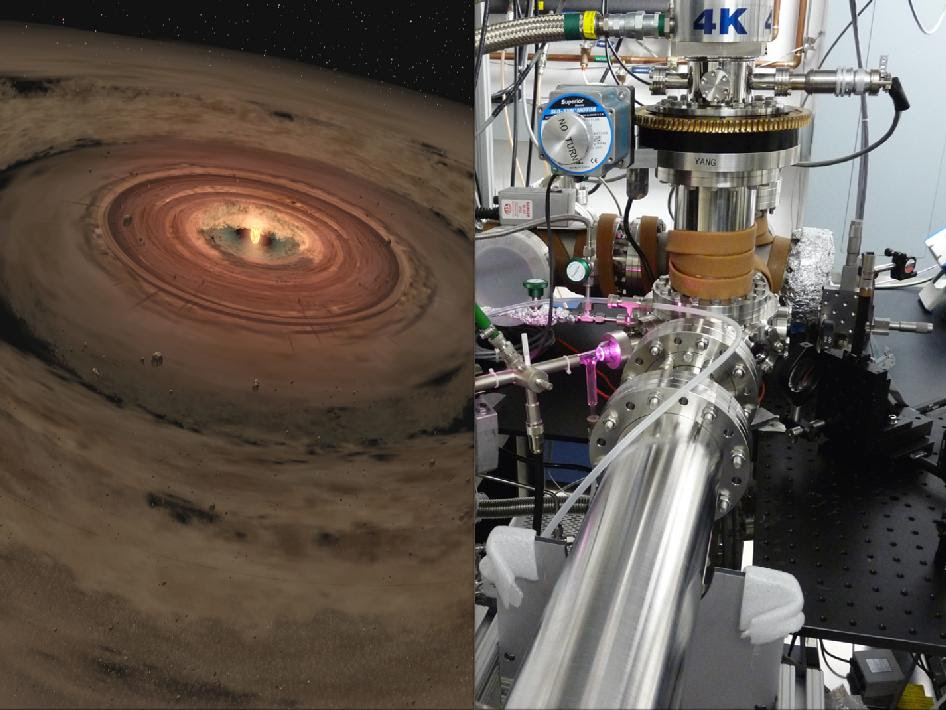 In a new study published in the Astrophysical Journal Letters, the research team provides the first direct look at the organic chemistry that takes place on icy particles in the frigid reaches of our solar system, and in the even chillier places between stars. Scientists think that the basic ingredients of life, including water and organics, began their journey to Earth on these lonesome ice particles. The ice and organics would have found their way into comets and asteroids, which then fell to Earth, delivering "prebiotic" ingredients that could have jump-started life.

The various steps needed to go from icy organics to slime molds are not clear, but the new findings help explain how the process works. The lab experiments show that organic material can begin the processing it needs to become prebiotic -- while still frozen in ice.

"The very basic steps needed for the evolution of life may have started in the coldest regions of our universe," said Murthy Gudipati, lead author of the new study at JPL. "We were surprised to see organic chemistry brewing up on ice, at these very cold temperatures in our lab."

The organics looked at in the study are called polycyclic aromatic hydrocarbons, or PAHs for short. These carbon-rich molecules can be found on Earth as combustion products: for example, in barbecue pits, candle soot and even streaming out of the tail pipe of your car. They have also been spotted throughout space in comets, asteroids and more distant objects. NASA's Spitzer Space Telescope has detected PAHs in the swirling planet-forming disks around stars, in the spaces between stars and in remote galaxies.

Murthy and his colleague Rui Yang of JPL used their lab setup to mimic the environment of icy PAH molecules in the quiet cold of space, at temperatures as low as 5 Kelvin (minus 450 degrees Fahrenheit, or minus 268 degrees Celsius). First, they bombarded the particles with ultraviolet radiation similar to that from stars. Then, to determine the products of the chemical reaction, they used a type of laser system known as MALDI (for Matrix Assisted Laser Desorption and Ionization), which involves zapping the ice with both infrared and ultraviolet lasers.

The results revealed that the PAHs had transformed: they had incorporated hydrogen atoms into their structure and lost their circular, aromatic bonds, becoming more complex organics. According to Gudipati, this is the type of change that would need to occur if the material were to eventually become amino acids and nucleotides -- bits and pieces of protein and DNA, respectively.

"PAHs are strong, stubborn molecules, so we were surprised to see them undergoing these chemical changes at such freezing-cold temperatures," said Gudipati.

Another bonus for the research is that it might explain the mystery of why PAHs have not yet been identified on ice grains in space. While the hardy organics are pervasive in the cosmos as gases and hot dust, researchers have remained puzzled that their signatures do not show up on ice. The new findings show that PAHs, once they stick to the ice surface, are chemically transformed into other complex organics, explaining why they might not be seen.

While the new results teach us that life's journey could have already begun in the very cold regions of the universe, another question remains: Did it arise elsewhere beyond our sun, too? Researchers don't know, but studies like this one help the ongoing search for life beyond Earth.