When a huge asteroid collided with Earth about 2.5 million years ago in the southern Pacific Ocean it not only likely generated a massive tsunami but also may have plunged the world into the Ice Ages, a new study suggests.

A team of Australian researchers says that because the Eltanin meteor – which was up to two kilometers across - crashed into deep water, most scientists have not adequately considered either its potential for immediate catastrophic impacts on coastlines around the Pacific rim or its capacity to destabilize the entire planet’s climate system.

“This is the only known deep-ocean impact event on the planet and it’s largely been forgotten because there’s no obvious giant crater to investigate, as there would have been if it had hit a landmass,” says Professor James Goff, lead author of a forthcoming paper in the Journal of Quaternary Science. Goff is co-director of UNSW’s Australia-Pacific Tsunami Research Centre and Natural Hazards Research Laboratory.

Site of Eltanin impact area in the South-East Pacific: Eltanin-impact-area 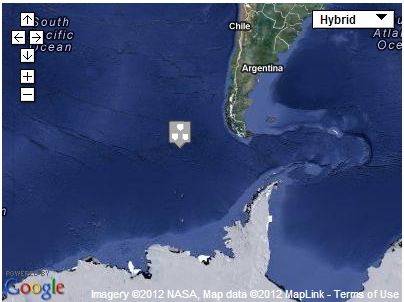 “But consider that we’re talking about something the size of a small mountain crashing at very high speed into very deep ocean, between Chile and Antarctica. Unlike a land impact, where the energy of the collision is largely absorbed locally, this would have generated an incredible splash with waves literally hundreds of meters high near the impact site.

“Some modelling suggests that the ensuing mega-tsunami could have been unimaginably large – sweeping across vast areas of the Pacific and engulfing coastlines far inland. But it also would have ejected massive amounts of water vapor, sulfur and dust up into the stratosphere.

“The tsunami alone would have been devastating enough in the short term, but all that material shot so high into the atmosphere could have been enough to dim the sun and dramatically reduce surface temperatures. Earth was already in a gradual cooling phase, so this might have been enough to rapidly accelerate and accentuate the process and kick start the Ice Ages.”

An animated simulation of the event by other researchers can be seen here
Credit: University of California Santa Cruz Earth And Planetary Sciences  http://eps.ucsc.edu/

In the paper, Goff and colleagues from UNSW and the Australian Nuclear Science and Technology Organisation, note that geologists and climatologists have interpreted geological deposits in Chile, Antarctica, Australia, and elsewhere as evidence of climatic change, marking the start of the Quaternary period. An alternative interpretation is that some or all of these deposits may be the result of mega-tsunami inundation, the study suggests.

“There’s no doubt the world was already cooling through the mid and late Pliocene,” says co-author Professor Mike Archer. “What we’re suggesting is that the Eltanin impact may have rammed this slow-moving change forward in an instant - hurtling the world into the cycle of glaciations that characterized the next 2.5 million years and triggered our own evolution as a species.

“As a ‘cene’ changer - that is, from the Pliocene to Pleistocene - Eltanin may have been overall as significant as the meteor that took out the non-flying dinosaurs 65 million years ago. We’re urging our colleagues to carefully reconsider conventional interpretations of the sediments we’re flagging and consider whether these could be instead the result of a mega-tsunami triggered by a meteor.”