We’ve heard it time and time again: exercise is good for us. And it’s not just good for physical health – research shows that daily physical activity can also boost our mental health. But what actually accounts for the association between exercise and mental health?

Marines exercising on the USS Bataan 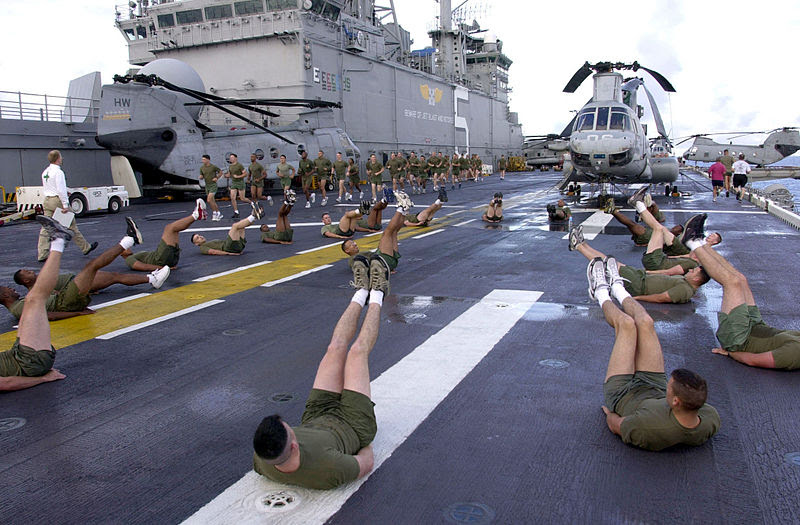 Karin Monshouwer of the Trimbos Institute in the Netherlands and colleagues at Trimbos and VU University Medical Center specifically wanted to examine two existing explanations for the link between exercise and mental health. The self-image hypothesis suggests that physical activity has positive effects on body weight and body structure, leading to positive feedback from peers and improved self-image, and ultimately improving mental health. The social interaction hypothesis, on the other hand, holds that it’s the social aspects of physical activity – such as social relationships and mutual support among team members – that contribute to the positive effects of exercise on mental health.

Monshouwer and her colleagues surveyed over 7000 Dutch students, ages 11 to 16. The adolescents completed validated surveys aimed at assessing their physical activity, mental health problems, body weight perception, and participation in organized sports. The researchers also gathered data on the adolescents’ age, gender, and socioeconomic status; whether they lived at home with their parents; and whether they lived in an urban area.

The researchers found that adolescents who were physically inactive or who perceived their bodies as either “too fat” or “too thin” were at greater risk for both internalizing problems (e.g., depression, anxiety) and externalizing problems (e.g., aggression, substance abuse). Adolescents who participated in organized sports, on the other hand, were at lower risk for mental health problems.

Confirming both the self-image hypothesis and the social interaction hypothesis, adolescents’ body weight perception (i.e., “too heavy,” “good,” or “too thin”) and sports club membership each partially accounted for the relationship between physical activity and mental health, even after taking adolescents’ backgrounds into account.

These results suggest that certain psychosocial factors – body image and social interaction – may help to explain at least part of the connection between physical activity and mental health. The researchers acknowledge, however, that other factors, such as the physiological effects of exercise, are probably also at work.

“We think that these findings are important for policymakers and anyone who works in healthcare or prevention. Our findings indicate that physical activity may be one effective tool for the prevention of mental health problems in adolescence,” says Monshouwer.

Monshouwer and her colleagues hope that future studies will be able to examine similar questions while following participants over time. Such longitudinal studies could help researchers to understand how physical activity type and context might influence the relationship between exercise and mental health.

Clinical Psychological Science — a new journal from APS — publishes advances in clinical science and provides a venue for cutting-edge research across a wide range of conceptual views, approaches, and topics. The journal encompasses many core domains that have defined clinical psychology, but also boundary-crossing advances that integrate and make contact with diverse disciplines and that may not easily be found in traditional clinical psychology journals. Among the key topics are research on the underlying mechanisms and etiologies of psychological health and dysfunction; basic and applied work on the diagnosis, assessment, treatment, and prevention of mental illness; service delivery; and promotion of well-being.