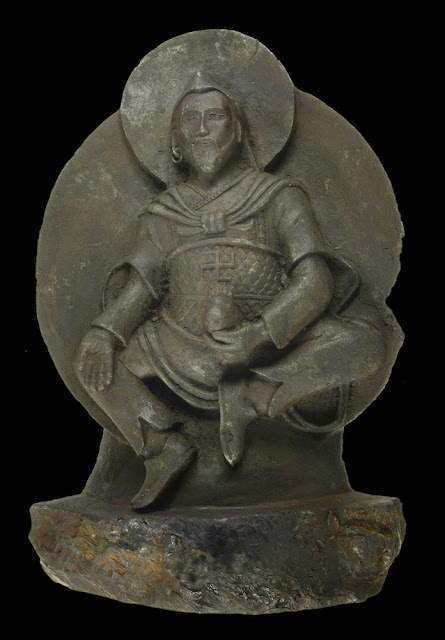 It sounds like an artifact from an Indiana Jones film; a 1,000 year-old ancient Buddhist statue which was first recovered by a Nazi expedition in 1938 has been analysed by scientists and has been found to be carved from a meteorite. The findings, published in Meteoritics and Planetary Science, reveal the priceless statue to be a rare ataxite class of meteorite.


The statue, known as the Iron Man, weighs 10kg and is believed to represent a stylistic hybrid between the Buddhist and pre-Buddhist Bon culture that portrays the god Vaisravana, the Buddhist King of the North, also known as Jambhala in Tibet.

The statue was discovered in 1938 by an expedition of German scientists led by renowned zoologist Ernst Schäfer. The expedition was supported by Nazi SS Chief Heinrich Himmler and the entire expeditionary team were believed to have been SS members.

Schäfer would later claim that he accepted SS support to advance his scientific research into the wildlife and anthropology of Tibet. However, historians believe Himmler's support may have been based on his belief that the origins of the Aryan race could be found in Tibet.

It is unknown how the statue was discovered, but it is believed that the large swastika carved into the centre of the figure may have encouraged the team to take it back to Germany. Once it arrived in Munich it became part of a private collection and only became available for study following an auction in 2007.

The first team to study the origins of the statue was led by Dr Elmar Buchner from Stuttgart University. The team was able to classify it as an ataxite, a rare class of iron meteorite with high contents of nickel.

"The statue was chiseled from a fragment of the Chinga meteorite which crashed into the border areas between Mongolia and Siberia about 15,000 years ago," said Dr Buchner. "While the first debris was officially discovered in 1913 by gold prospectors, we believe that this individual meteorite fragment was collected many centuries before."

Meteorites inspired worship from many ancient cultures ranging from the Inuit's of Greenland to the aborigines of Australia. Even today one of the most famous worship sites in the world, Mecca in Saudi Arabia, is based upon the Black Stone, believed to be a stony meteorite. Dr Buchner's team believe the Iron Man originated from the Bon culture of the 11th Century.

"The Iron Man statue is the only known illustration of a human figure to be carved into a meteorite, which means we have nothing to compare it to when assessing value," concluded Dr Buchner. "Its origins alone may value it at $20,000; however, if our estimation of its age is correct and it is nearly a thousand years old it could be invaluable."

The fall of meteorites has been interpreted as divine messages by multitudinous cultures since prehistoric times, and meteorites are still adored as heavenly bodies. Stony meteorites were used to carve birds and other works of art; jewelry and knifes were produced of meteoritic iron for instance by the Inuit society.

Approximately 10.6 kg of the Buddhist sculpture (the “iron man”) is made of an iron meteorite, which represents a particularity in religious art and meteorite science. The specific contents of the crucial main (Fe, Ni, Co) and trace (Cr, Ga, Ge) elements indicate an ataxitic iron meteorite with high Ni contents (approximately 16 wt%) and Co (approximately 0.6 wt%) that was used to produce the artifact.

In addition, the platinum group elements (PGEs), as well as the internal PGE ratios, exhibit a meteoritic signature. The geochemical data of the meteorite generally match the element values known from fragments of the Chinga ataxite (ungrouped iron) meteorite strewn field discovered in 1913. The provenance of the meteorite as well as of the piece of art strongly points to the border region of eastern Siberia and Mongolia, accordingly. The sculpture possibly portrays the Buddhist god Vaiśravana and might originate in the Bon culture of the eleventh century. However, the ethnological and art historical details of the “iron man” sculpture, as well as the timing of the sculpturing, currently remain speculative.