As experts debate whether an anti-Muslim video posted on YouTube caused the violence in Libya or whether conditions already existed and the clip was the catalyst, Wake Forest University communication professor and social media expert Ananda Mitra says there is information on the Web that can give insight into how people might react to or behave under certain circumstances, and it is shared voluntarily online.

Screenshot from Innocence of Muslims

Now the question remains as to whether the deadly protests could have been avoided. “It is not surprising that social media may have contributed to the violence that has erupted in Libya. The research so far shows patterns emerging that indicate anti-Muslim images would have excited existing emotions that were identifiable in the writings of people in the region. There were things going on in these narratives that gave us a moment for pause.”

Mitra coined the word “narbs” or narrative bits, to describe the small pieces of information floating in the digital sphere in social media sites worldwide. His current research on narbs originating in the Middle East is telling. Using computer algorithms he has examined hundreds of blogs written in English by people in the Arab world. 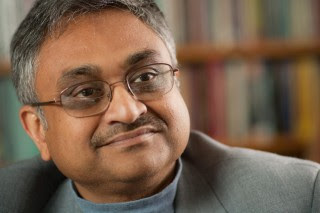 With the availability of inexpensive digital and sound capturing equipment and the ability to immediately gain access to the public view through social media sites, it is no longer necessary to have the financial, intellectual and creative resources to produce a hate message and distribute it, says Mitra. “Because it is online, material can take on the merit of having truth and become a center around which people can rally. Those who want to produce the rallying force use these publicly available, easily produced and easily distributed messages to create a movement.”

Is it possible it to use predictive policing to unearth possible catastrophes? “The capabilities exist today,” says Mitra.

Governments are dealing with the question of how much they should monitor digital DNA. Mitra says the volume of video, audio and textual information on the Internet is formidable and, even with existing computing technologies, challenging to monitor. And there is also the privacy question.

“The fine privacy line is going to get finer because, for example, when you consider that the number of people on Facebook makes it, by population, the third largest country in the world after China and India, there are humongous amounts of information unwittingly generated each day that provide insight into what people are thinking, feeling and doing.”

Mitra says social media will likely continue to be used to spread hate messages. The alternative could be an Orwellian surveillance that is both enormous in scope, expensive to monitor and a questionable violation of privacy.