In swimming pools, tiny droplets can transport bacteria. In the video, James Bird explains why it’s important to know how a bubble pops.

They tickle your nose as you sip champagne, cling to the kitchen sink while you wash the dishes, and make for a soothing bath. And while they may seem like nothing more than a whimsical act of nature, bubbles, and how they pop, are the subject of serious fluid mechanics research and of endless fascination for James Bird, a College of Engineering assistant professor of mechanical engineering.

Bird has studied thousands of bubbles—simply put, a gas surrounded by a thin liquid film—over nearly five years. Understanding what happens when they burst in, say, the ocean, in glass manufacturing, and even in a public pool has big implications, he says, for climatology, industry, and public health.

The conventional wisdom was that a bubble sitting on a flat surface disappears after it bursts: a hole opens up and the liquid film retracts, collapsing at the base. But Bird, using a variety of liquids to create bubbles in his lab and high-speed video cameras to capture the big moment from different angles, has found that a bubble doesn’t always vanish. Sometimes it creates more bubbles.

His research shows that as the air inside the bubble escapes (a process too fast for the naked eye to see), the liquid film retracts and begins to fold over, away from the opening, eventually trapping a ring of air at the base. That ring, called a torus, breaks up into smaller “daughter” bubbles. Similarly, when the daughter bubbles rupture, even smaller bubbles form.

In a body of water, such as a deep pool, something different happens. A bubble sitting on a liquid surface forces the water down, creating a cavity. When the bubble pops and the film retracts, the cavity rapidly fills up, propelling a narrow jet of water upward. This time, the ring of daughter bubbles forms around the jet; within a half a second, they too burst, sending tiny droplets or aerosols into the atmosphere. In a swimming pool or hot tub, those droplets, just the right size to inhale, can transmit bacteria and viruses. That finding, Bird says, also challenges the conventional wisdom.

“It’s been known for 60 years that aerosols happen when a bubble pops,” he says. “But what people had concluded was that it was the smaller bubbles, a millimeter or smaller, that make aerosols. The larger bubbles could make a jet, but that jet was too big to make aerosols. What this work is trying to point out is the larger bubbles are even more important, because they can be a pathway to making smaller bubbles, which can then make aerosols. That’s what we’re contributing that’s new, this idea of bubbles from bubbles.”

ENG’s James Bird has found that a bubble doesn’t always vanish after it pops. Sometimes it creates more bubbles. 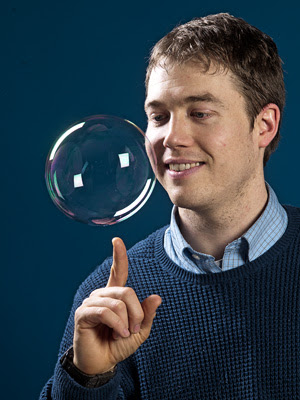 In the open ocean, says Bird, trillions of trillions of bubbles pop every second. The aerosols formed by bursting daughter bubbles are what we know as sea spray, which can carry dissolved gases, salt, thermal energy, and other materials into the atmosphere.

“This has huge implications for predicting cloud formation and looking at global climate models,” he says. “If we have a better sense of what’s going on in the ocean in terms of when a bubble pops and what kind of aerosol distribution it makes, that can lend itself to better predictions. A lot of uncertainty in climate modeling is cloud formation and air and sea interaction. And that comes back to bubbles and aerosols. It’s a way of reducing uncertainty in models to make better predictions.”

Understanding how bubbles pop can help a variety of industries as well, Bird says, such as glassmaking, which can use the knowledge to prevent the formation of small bubbles. “They could change the process by changing the properties of the material they’re working with, some parameter like temperature or viscosity,” he says.

Bird uses liquids such as water, solutions of water and glycerol, or silicon oil to create bubbles in the lab. One of his next projects is to study the thickness of the liquid film at various points of a bubble. “From an applications point of view, the two most important attributes of a popping bubble are the speed at which the film retracts and the size distribution of the aerosols that are created,” he says. “And both attributes strongly depend on the bubble thickness. People now recognize that the thickness can change quite dramatically from the top to the sides. Still, this thickness has yet to be accurately measured and related to the fundamental forces at play.”

Bird says scientists have been studying popping bubbles at least since the late 19th century. The British physicist Lord Rayleigh studied bubbles popping on paper, but wouldn’t have observed the formation of daughter bubbles on such a porous surface. “It could have been described very elegantly, even without the high-speed cameras,” Bird says. “Maybe they noticed it, but didn’t think much of it.

“And I’m sure that there are a million problems like that out there. I’ve talked to people about bubbles, like the grandmother sitting next to me on the plane, and she said, ‘Oh, yeah, I see that all the time in my kitchen.’”