At the onset of a series of coronal mass ejections (CMEs) on August 20, 2012, this bulbous CME certainly resembled a light bulb. It has the thin outer edge and a bright, glowing core at its center. CMEs are often bulbous, but it has been years since we’ve seen one with the elements (pun intended) of a light bulb.

The frames were taken by Solar and Heliospheric Observatory's (SOHO) Large Angle and Spectrometric Coronagraph (LASCO) C2 instrument. LASCO is able to take images of the solar corona by blocking the light coming directly from the Sun with an occulter disk, creating an artificial eclipse within the instrument itself. The position of the solar disk is indicated in the images by the white circle. The C2 image shows the inner solar corona up to 8.4 million kilometers (5.25 million miles) away from the Sun.

Screen capture from above video highlighting the light bulb-shaped CME. 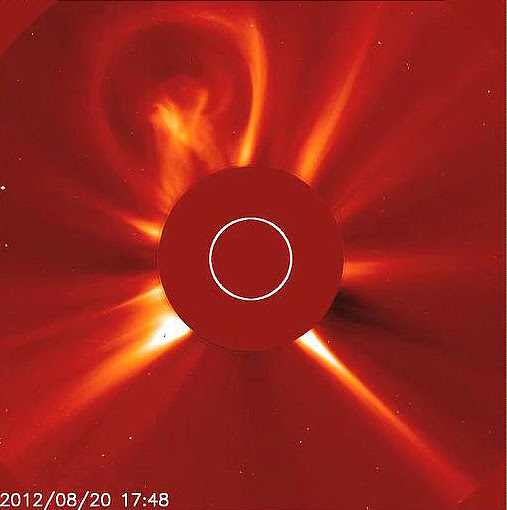