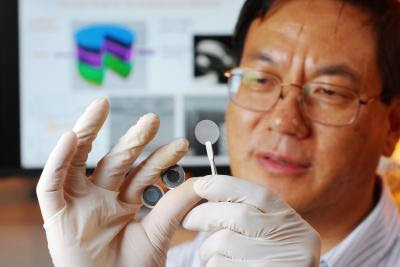 At the heart of the self-charging power cell is a piezoelectric membrane that drives lithium ions from one side of the cell to the other when the membrane is deformed by mechanical stress. The lithium ions driven through the polarized membrane by the piezoelectric potential are directly stored as chemical energy using an electrochemical process.

By harnessing a compressive force, such as a shoe heel hitting the pavement from a person walking, the power cell generates enough current to power a small calculator. A hybrid power cell the size of a conventional coin battery can power small electronic devices – and could have military applications for soldiers who might one day recharge battery-powered equipment as they walked.

"People are accustomed to considering electrical generation and storage as two separate operations done in two separate units," said Zhong Lin Wang, a Regents professor in the School of Materials Science and Engineering at the Georgia Institute of Technology. "We have put them together in a single hybrid unit to create a self-charging power cell, demonstrating a new technique for charge conversion and storage in one integrated unit." 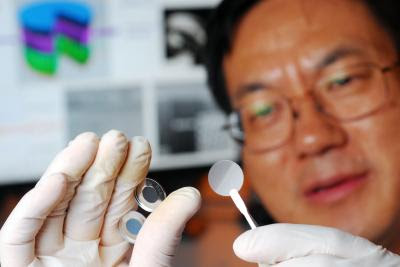 The research was reported Aug. 9, 2012 in the journal Nano Letters. The research was supported by the Defense Advanced Research Projects Agency (DARPA), the U.S. Air Force, the U.S. Department of Energy, the National Science Foundation, and the Knowledge Innovation Program of the Chinese Academy of Sciences.

The power cell consists of a cathode made from lithium-cobalt oxide (LiCoO2) and an anode consisting of titanium dioxide (TiO2) nanotubes grown atop a titanium film. The two electrodes are separated by a membrane made from poly(vinylidene fluoride) (PVDF) film, which generates a piezoelectric charge when placed under strain. When the power cell is mechanically compressed, the PVDF film generates a piezoelectric potential that serves as a charge pump to drive the lithium ions from the cathode side to the anode side. The energy is then stored in the anode as lithium-titanium oxide.

Charging occurs in cycles with the compression of the power cell creating a piezopotential that drives the migration of lithium ions until a point at which the chemical equilibriums of the two electrodes are re-established and the distribution of lithium ions can balance the piezoelectric fields in the PVDF film. When the force applied to the power cell is released, the piezoelectric field in the PVDF disappears, and the lithium ions are kept at the anode through a chemical process.

The charging cycle is completed through an electrochemical process that oxidizes a small amount of lithium-cobalt oxide at the cathode to Li1-xCoO2 and reduces a small amount of titanium dioxide to LixTiO2 at the anode. Compressing the power cell again repeats the cycle.

When an electrical load is connected between the anode and cathode, electrons flow to the load, and the lithium ions within the cell flow back from the anode side to the cathode side. 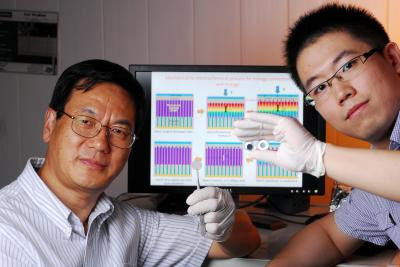 Using a mechanical compressive force with a frequency of 2.3 Hertz, the researchers increased the voltage in the power cell from 327 to 395 millivolts in just four minutes. The device was then discharged back to its original voltage with a current of one milliamp for about two minutes. The researchers estimated the stored electric capacity of the power cell to be approximately 0.036 milliamp-hours.

So far, Wang and his research team – which included Xinyu Xue, Sihong Wang, Wenxi Guo and Yan Zhang – have built and tested more than 500 of the power cells. Wang estimates that the generator-storage cell will be as much as five times more efficient at converting mechanical energy to chemical energy for as a two-cell generator-storage system.

Much of the mechanical energy applied to the cells is now consumed in deforming the stainless steel case the researchers are using to house their power cell. Wang believes the power storage could be boosted by using an improved case.

"When we improve the packaging materials, we anticipate improving the overall efficiency," he said. "The amount of energy actually going into the cell is relatively small at this stage because so much of it is consumed by the shell."

Beyond the efficiencies that come from directly converting mechanical energy to chemical energy, the power cell could also reduce weight and space required by separate generators and batteries. The mechanical energy could come from walking, the tires of a vehicle hitting the pavement, or by harnessing ocean waves or mechanical vibrations.

"One day we could have a power package ready to use that takes advantage of this hybrid approach," Wang said. "Almost anything that involves mechanical action could provide the strain needed for charging. People walking could be generating electricity as they move."

This research was supported by DARPA (HR0011-09-C-0142); the U.S. Air Force, the U.S. Department of Energy, Office of Basic Energy Sciences (DE-FG02-07ER46394), the National Science Foundation (CMMI-0403671), and the Knowledge Innovation Program of the Chinese Academy of Sciences (KJCX2-YW-M13). The content is solely the responsibility of the authors and does not necessarily represent the official views of DARPA, the U.S. Air Force, the Department of Energy or the National Science Foundation.