Details such as the shadow of the mast on NASA's Mars rover Curiosity appear in an image taken Aug. 17, 2012, by the High Resolution Imaging Science Experiment (HiRISE) camera on NASA's Mars Reconnaissance Orbiter, from more directly overhead than previous HiRISE images of Curiosity. In this product, cutouts showing the rover and other hardware or ground markings from the landing of the Mars Science Laboratory spacecraft are presented across the top of a larger, quarter-resolution overview keyed to the full-resolution cutouts. North is up. The scale bar is 200 meters (one-eighth of a mile). 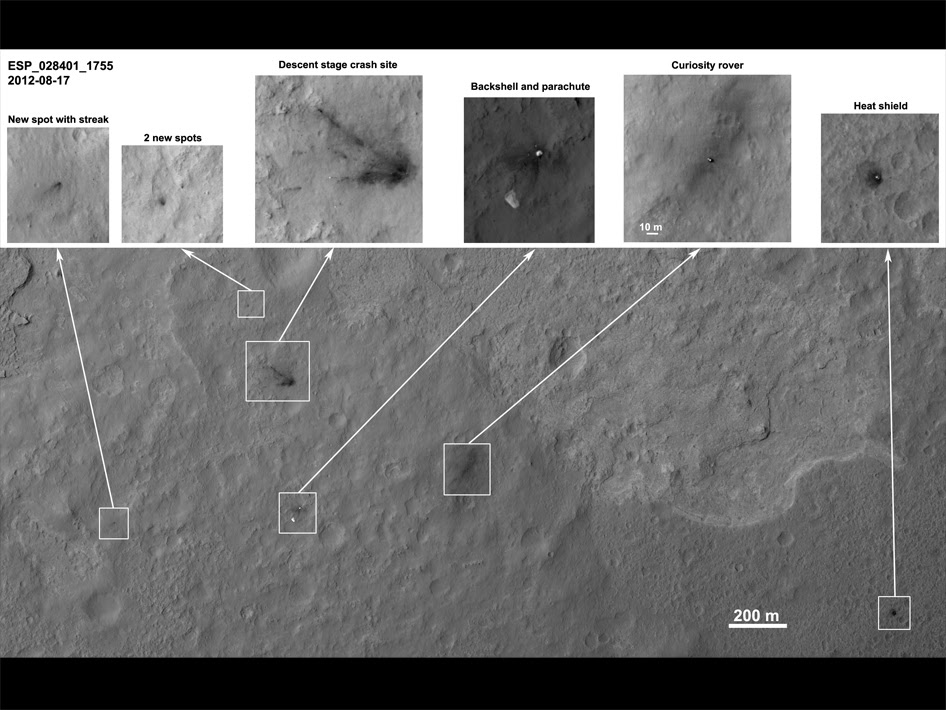 Curiosity landed Aug. 5, PDT (Aug. 6, EDT). HiRISE imaged the spacecraft during its descent PIA15993, on the first day after landingPIA16001 and on the sixth day after landing PIA16057 . This image was acquired looking more directly down (9 degree roll angle) than the prior images so the pixel scale is improved to approximately 11 inches (27 centimeters) per pixel. Each cutout is individually stretched to best show the information without saturation. A special noise cleaning method was applied to the images by Paul Geissler of U.S. Geological Survey.

The shadow of Curiosity's mast extends southeast from the rover, opposite the solar illumination direction.

There are also bright pieces scattered around the backshell, mostly downrange, and interesting detail in the parachute.

Other products from the same HiRISE observation can be found at http://www.uahirise.org/ESP_028401_1755 .