An international team of scientists has discovered the oldest record of arthropods—invertebrate animals that include insects, arachnids, and crustaceans—preserved in amber. The specimens, one fly and two mites found in millimeter-scale droplets of amber from northeastern Italy, are about 100 million years older than any other amber arthropod ever collected. The group’s findings, which are published today in the Proceedings of the National Academy of Sciences, pave the way for a better evolutionary understanding of the most diverse group of organisms in the world. 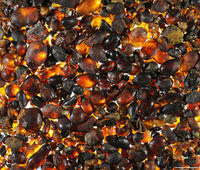 
“Amber is an extremely valuable tool for paleontologists because it preserves specimens with microscopic fidelity, allowing uniquely accurate estimates of the amount of evolutionary change over millions of years,” said corresponding author David Grimaldi, a curator in the American Museum of Natural History’s Division of Invertebrate Zoology and a world authority on amber and fossil arthropods 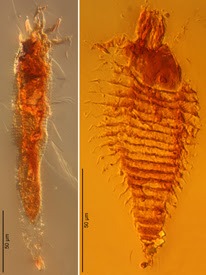 
Globules of fossilized resin are typically called amber. Amber ranges in age from the Carboniferous (about 340 million years ago) to about 40,000 years ago, and has been produced by myriad plants, from tree ferns to flowering trees, but predominantly by conifers. Even though arthropods are more than 400 million years old, until now, the oldest record of the animals in amber dates to about 130 million years. The newly discovered arthropods break that mold with an age of 230 million years. They are the first arthropods to be found in amber from the Triassic Period.


Triassic amber drops from the Dolomites 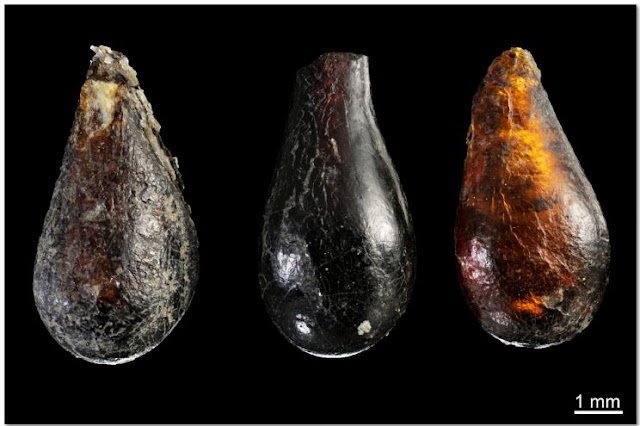 The amber droplets, most between 2-6 millimeters long, were buried in outcrops high in the Dolomite Alps of northeastern Italy and excavated by Eugenio Ragazzi and Guido Roghi of the University of Padova. About 70,000 of the miniscule droplets were screened for inclusions —encased animal and plant material—by a team of German scientists led by Alexander Schmidt, of Georg-August University, Göttingen, resulting in the discovery of the three arthropods. The tiny arthropods were studied by Grimaldi and Evert Lindquist, an expert on gall mites at Agriculture and Agri-Food Canada in Ottawa.

Two of the specimens are new species of mites, named Triasacarus fedelei and Ampezzoa triassica. They are the oldest fossils in an extremely specialized group called Eriophyoidea that has about 3,500 living species, all of which feed on plants and sometimes form abnormal growth called “galls.” The ancient gall mites are surprisingly similar to ones seen today.
'
Scanning electron microscope image of a modern Gallmilbenart collected on the leaves of a silver maple in New Jersey, USA. 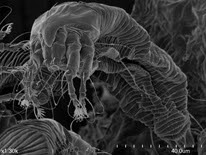 “You would think that by going back to the Triassic you’d find a transitional form of gall mite, but no,” Grimaldi said. “Even 230 million years ago, all of the distinguishing features of this family were there—a long, segmented body; only two pairs of legs instead of the usual four found in mites; unique feather claws, and mouthparts.”

The ancient mites likely fed on the leaves of the tree that ultimately preserved them, a conifer in the extinct family Cheirolepidiaceae. Although about 97 percent of today’s gall mites feed on flowering plants, Triasacarus fedelei and Ampezzoa triassica existed prior to the appearance and rapid radiation of flowering plants. This finding reveals the evolutionary endurance of the mites.

“We now know that gall mites are very adaptable,” Grimaldi said. “When flowering plants entered the scene, these mites shifted their feeding habits, and today, only 3 percent of the species live on conifers. This shows how gall mites tracked plants in time and evolved with their hosts.”

The third amber specimen, a fly, cannot be identified because, outside of the insect’s antennae, its body parts were not well preserved. But now that the researchers have shown that amber preserved Triassic arthropods, they are eager to find more specimens.

“There was a huge change in the flora and fauna in the Triassic because it was right after one of the most profound mass extinctions in history, at the end of the Permian,” Grimaldi said. “It’s an important time to study if you want to know how life evolved.”

This research was funded by the German Initiative of Excellence. Other authors include Saskia Jancke, of the Natural History Museum in Berlin; Paul Nascimbene, American Museum of Natural History; Kerstin Schmidt, Friedrich-Schiller-University Jena, Germany; and Torsten Wappler, University of Bonn, Germany.