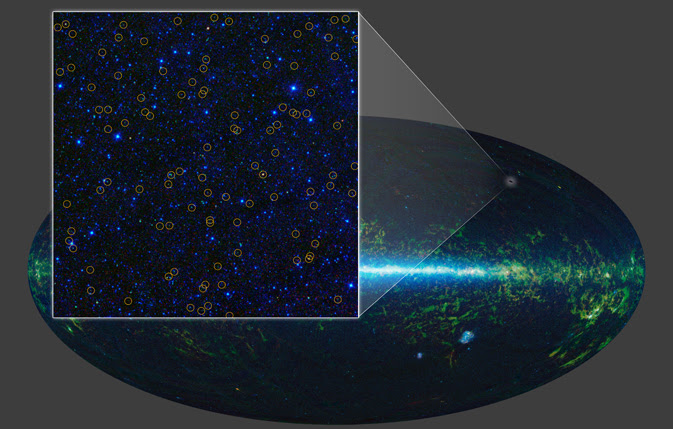 Images from the telescope have revealed millions of dusty black hole candidates across the universe and about 1,000 even dustier objects thought to be among the brightest galaxies ever found. These powerful galaxies, which burn brightly with infrared light, are nicknamed hot DOGs.

Quasar Drenched in Water Vapor: This artist's concept illustrates a quasar, or feeding black hole, similar to APM 08279+5255, where astronomers discovered huge amounts of water vapor. Gas and dust likely form a torus around the central black hole, with clouds of charged gas above and below. X-rays emerge from the very central region, while thermal infrared radiation is emitted by dust throughout most of the torus. While this figure shows the quasar's torus approximately edge-on, the torus around APM 08279+5255 is likely positioned face-on from our point of view. "WISE has exposed a menagerie of hidden objects," said Hashima Hasan, WISE program scientist at NASA Headquarters in Washington. "We've found an asteroid dancing ahead of Earth in its orbit, the coldest star-like orbs known and now, supermassive black holes and galaxies hiding behind cloaks of dust."

Starry Night Tango:  This simulation, which represents a few billion years of evolution, shows two disk galaxies interacting in a graceful gravitational dance. The color represents the temperature of the gas in the galaxies. The simulation shows how gravity can rearrange the gas and stars in galaxies during these interaction events, fueling the supermassive black holes at the centers of each galaxy. Radiation from the energized black holes can heat up the gas and blow it away, causing the outbursts seen in the animation. NASA's Wide-field Infrared Survey Explorer (WISE) is discovering some of the most active, powerful galaxies known, which in some cases may have been fueled by such mergers.
Video courtesy Volker Springel, Heidelberg University, Germany

WISE scanned the whole sky twice in infrared light, completing its survey in early 2011. Like night-vision goggles probing the dark, the telescope captured millions of images of the sky. All the data from the mission have been released publicly, allowing astronomers to dig in and make new discoveries.

The latest findings are helping astronomers better understand how galaxies and the behemoth black holes at their centers grow and evolve together. For example, the giant black hole at the center of our Milky Way galaxy, called Sagittarius A*, has 4 million times the mass of our sun and has gone through periodic feeding frenzies where material falls towards the black hole, heats up and irradiates its surroundings. Bigger central black holes, up to a billion times the mass of our sun, may even shut down star formation in galaxies.

Galaxies Burn Bright Like High-Wattage 'Light Bulbs': NASA's Wide-field Infrared Survey Explorer (WISE) has identified about 1,000 extremely obscured objects over the sky, as marked by the magenta symbols. These hot dust-obscured galaxies, or "hot DOGs," are turning out to be among the most luminous, or intrinsically bright objects known, in some cases putting out over 1,000 times more energy than our Milky Way galaxy. 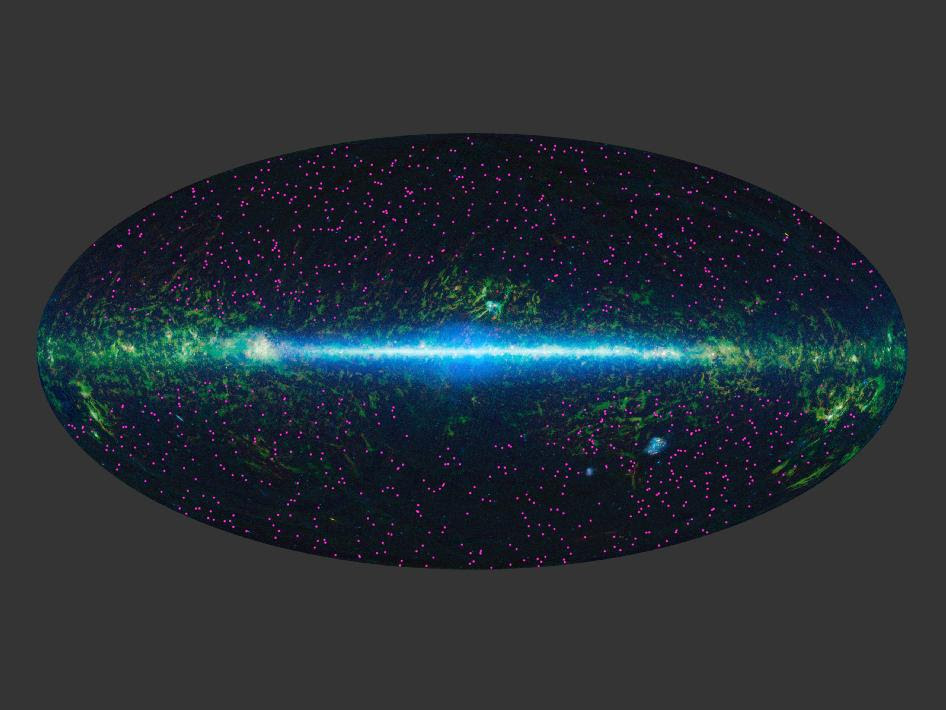 Extremely Bright and Extremely Rare: This image zooms in on the region around the first "hot DOG" (red object in magenta circle), discovered by NASA's Wide-field Infrared Survey Explorer, or WISE. Hot DOGs are hot dust-obscured galaxies. Follow-up observations with the W.M. Keck Observatory on Mauna Kea, Hawaii, show this source is over 10 billion light-years away. It puts out at least 37 trillion times as much energy as the sun. 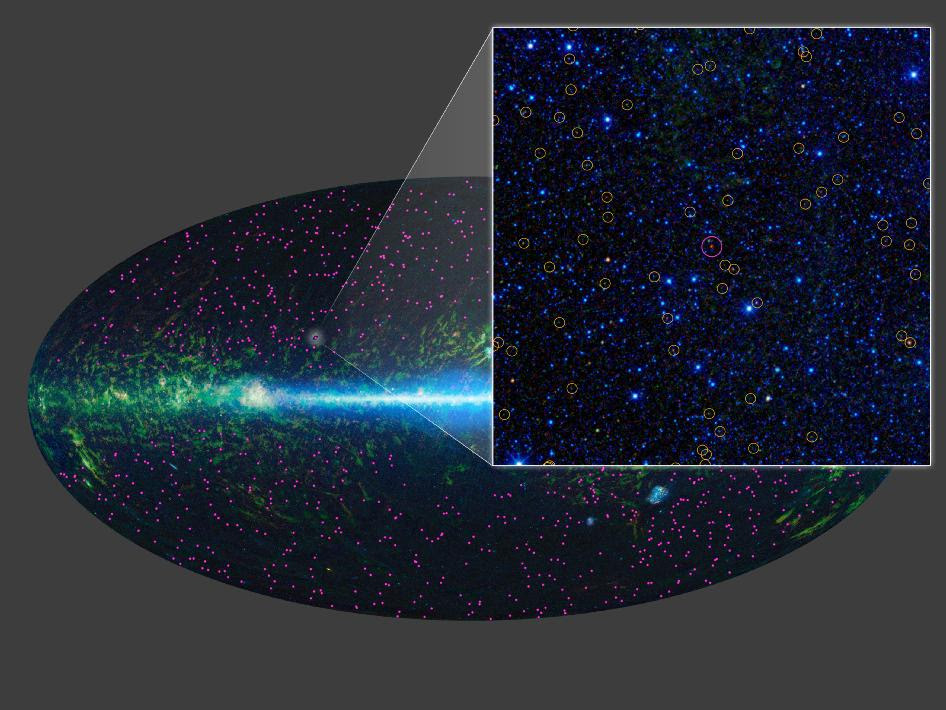 In one study, astronomers used WISE to identify about 2.5 million actively feeding supermassive black holes across the full sky, stretching back to distances more than 10 billion light-years away. About two-thirds of these objects never had been detected before because dust blocks their visible light. WISE easily sees these monsters because their powerful, accreting black holes warm the dust, causing it to glow in infrared light.

The circular inset images, obtained with NASA's Hubble Space Telescope, show how the new WISE quasars differ from the quasars identified in visible light. Quasars selected in visible light look like stars, as shown in the lower right inset; the cross is a diffraction pattern caused by the bright point source of light. Quasars found by WISE often have more complex appearances, as seen in the Hubble inset near the center. This is because the quasars found by WISE are often obscured or hidden by dust, which blocks their visible light and allows the fainter host galaxy surrounding the black hole to be seen. 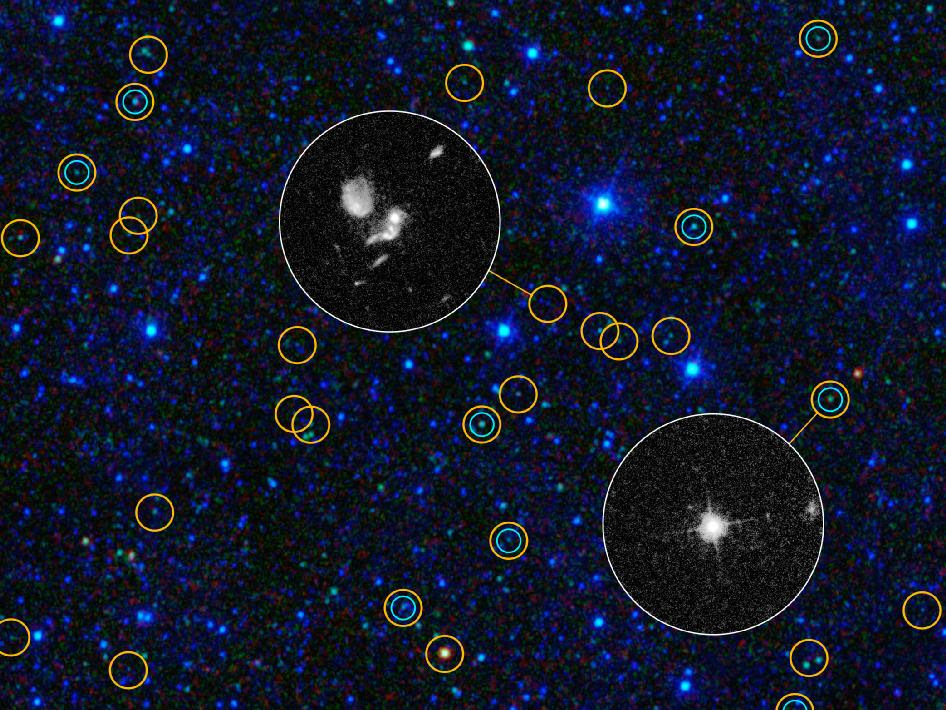 "We've got the black holes cornered," said Daniel Stern of NASA's Jet Propulsion Laboratory, Pasadena, Calif., lead author of the WISE black hole study and project scientist for another NASA black-hole mission, the Nuclear Spectroscopic Telescope Array (NuSTAR). "WISE is finding them across the full sky, while NuSTAR is giving us an entirely new look at their high-energy X-ray light and learning what makes them tick."

In two other WISE papers, researchers report finding what are among the brightest galaxies known, one of the main goals of the mission. So far, they have identified about 1,000 candidates.

Homing in on 'Hot Dogs': This image is a portion of the all-sky survey from NASA's Wide-field Infrared Survey Explorer, or WISE. It highlights the first of about 1,000 "hot DOGs" found by the mission (magenta circle). Hot DOGs are hot dust-obscured galaxies and are among the most powerful galaxies known. Yellow circles are active supermassive black holes found by WISE, which are much more common.

The panels at right show the "Hot DOG" as seen in the four individual infrared bands obtained by WISE. These images are at wavelengths from 5 to 30 times redder than what our eyes can see, with the shortest wavelengths at top, and longest at bottom.

Dust affects shorter wavelengths more than longer wavelengths. These objects are so dusty that not only their visible light but also their shorter-wavelength infrared light is blocked, as evident by their apparent absence in the top two panels. Less than one in 100,000 WISE sources are similarly prominent only in the two longer-wavelength WISE infrared bands. 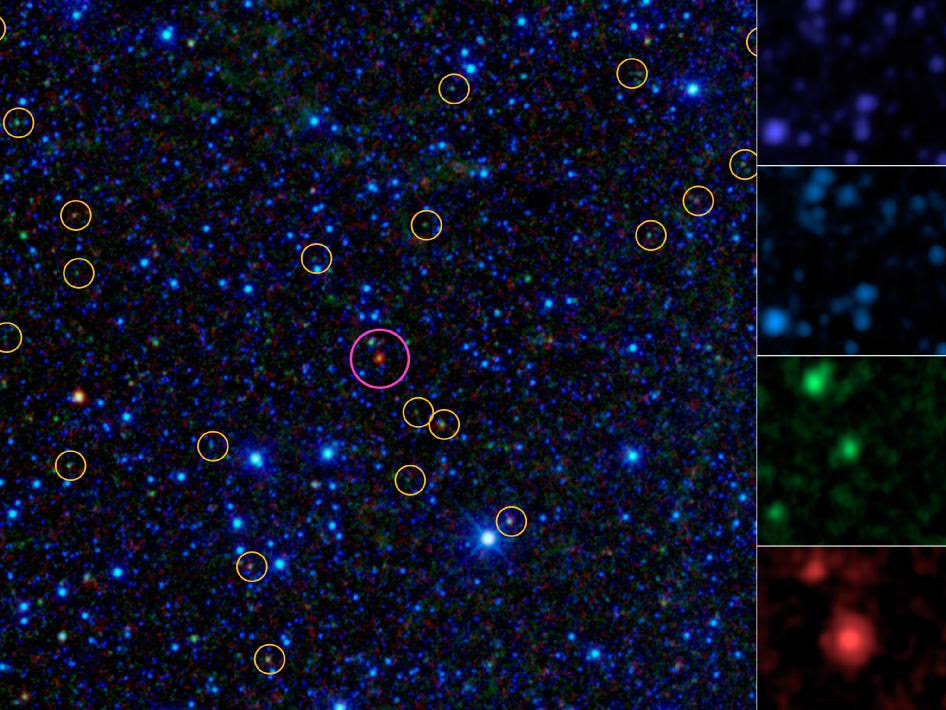 These extreme objects can pour out more than 100 trillion times as much light as our sun. They are so dusty, however, that they appear only in the longest wavelengths of infrared light captured by WISE. NASA's Spitzer Space Telescope followed up on the discoveries in more detail and helped show that, in addition to hosting supermassive black holes feverishly snacking on gas and dust, these DOGs are busy churning out new stars.

"These dusty, cataclysmically forming galaxies are so rare WISE had to scan the entire sky to find them," said Peter Eisenhardt, lead author of the paper on the first of these bright, dusty galaxies, and project scientist for WISE at JPL. "We are also seeing evidence that these record setters may have formed their black holes before the bulk of their stars. The 'eggs' may have come before the 'chickens.'"

More than 100 of these objects, located about 10 billion light-years away, have been confirmed using the W.M. Keck Observatory on Mauna Kea, Hawaii, as well as the Gemini Observatory in Chile, Palomar's 200-inch Hale telescope near San Diego, and the Multiple Mirror Telescope Observatory near Tucson, Ariz.


Analyzing Hot DOG Galaxies: This plot illustrates the new population of "hot DOGs," or hot dust-obscured objects, found by WISE. The purple band represents the range of brightness observed for the extremely dusty objects. These powerful galaxies, which host active supermassive black holes at their cores, pour out enormous amounts of light at infrared wavelengths, while their visible light is blocked by dust.

Visible light we see with our eyes has shorter wavelengths than one micron, while the longest wavelengths shown here come from observations with the Caltech Submillimeter Observatory on Mauna Kea, Hawaii. The red line shows the brightness profile, or spectral energy distribution, of a proto-typical infrared luminous galaxy.

The extreme WISE objects represented by the purple band are much brighter -- and peak at much shorter, or hotter, wavelengths -- than the typical infrared luminous galaxy, hence their nickname: hot dust-obscured galaxies, or Hot DOGs. 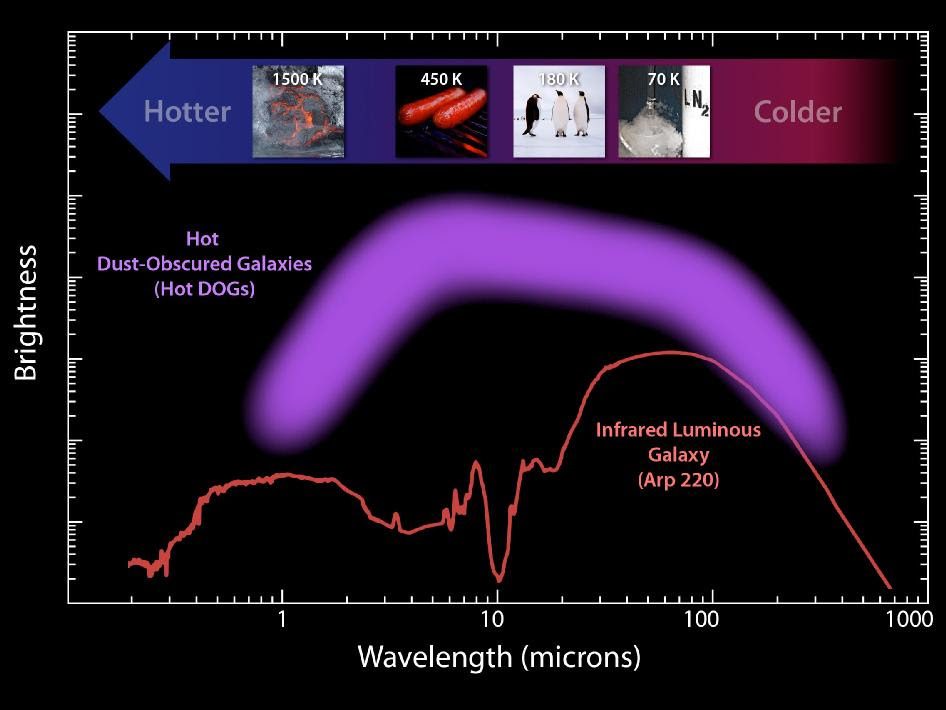 The WISE observations, combined with data at even longer infrared wavelengths from Caltech's Submillimeter Observatory atop Mauna Kea, revealed that these extreme galaxies are more than twice as hot as other infrared-bright galaxies. One theory is their dust is being heated by an extremely powerful burst of activity from the supermassive black hole.

"We may be seeing a new, rare phase in the evolution of galaxies," said Jingwen Wu of JPL, lead author of the study on the submillimeter observations. All three papers are being published in the Astrophysical Journal.

WISE images of our neighboring spiral galaxy, Andromeda (left) and the central region of a nearby cluster of elliptical galaxies, the Fornax cluster (right). 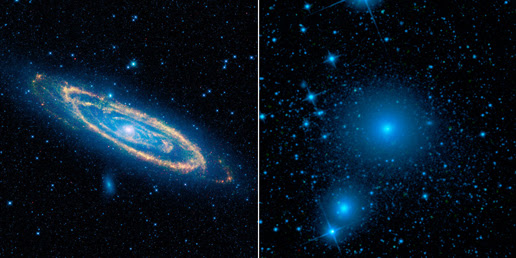 JPL manages and operates WISE for NASA's Science Mission Directorate, Washington. The principal investigator, Edward Wright, is at UCLA. The mission was competitively selected under NASA's Explorers Program managed by the Goddard Space Flight Center, Greenbelt, Md. The science instrument was built by the Space Dynamics Laboratory, Logan, Utah, and the spacecraft was built by Ball Aerospace & Technologies Corp., Boulder, Colo. Science operations and data processing and archiving take place at the Infrared Processing and Analysis Center at the California Institute of Technology in Pasadena. Caltech manages JPL for NASA.