NASA's Dawn spacecraft is on track to become the first probe to orbit and study two distant solar system destinations, to help scientists answer questions about the formation of our solar system. The spacecraft is scheduled to leave the giant asteroid Vesta on Sept. 4 PDT (Sept. 5 EDT) to start its two-and-a-half-year journey to the dwarf planet Ceres.

A simulated flyover of the most intriguing landmarks on giant asteroid Vesta, as seen by NASA's Dawn spacecraft.

Dawn began its 3-billion-mile (5-billion kilometer) odyssey to explore the two most massive objects in the main asteroid belt in 2007. Dawn arrived at Vesta in July 2011 and will reach Ceres in early 2015. Dawn's targets represent two icons of the asteroid belt that have been witness to much of our solar system's history.

To make its escape from Vesta, the spacecraft will spiral away as gently as it arrived, using a special, hyper-efficient system called ion propulsion. Dawn's ion propulsion system uses electricity to ionize xenon to generate thrust. The 12-inch-wide ion thrusters provide less power than conventional engines, but can maintain thrust for months at a time. 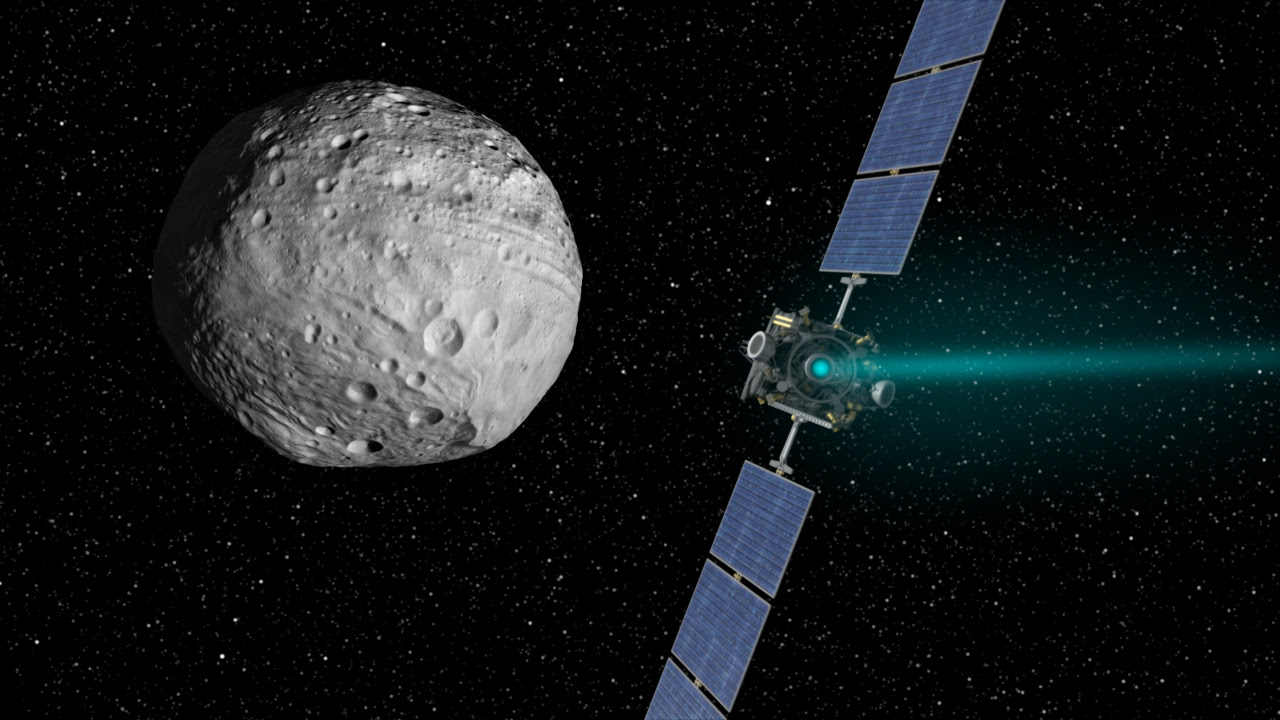 "Thrust is engaged, and we are now climbing away from Vesta atop a blue-green pillar of xenon ions," said Marc Rayman, Dawn's chief engineer and mission director, at NASA's Jet Propulsion Laboratory, Pasadena, Calif. "We are feeling somewhat wistful about concluding a fantastically productive and exciting exploration of Vesta, but now have our sights set on dwarf planet Ceres.

Dawn's orbit provided close-up views of Vesta, revealing unprecedented detail about the giant asteroid. The mission revealed that Vesta completely melted in the past, forming a layered body with an iron core. The spacecraft also revealed the scarring from titanic collisions Vesta suffered in its southern hemisphere, surviving not one but two colossal impacts in the last two billion years. Without Dawn, scientists would not have known about the dramatic troughs sculpted around Vesta, which are ripples from the two south polar impacts.

"We went to Vesta to fill in the blanks of our knowledge about the early history of our solar system," said Christopher Russell, Dawn's principal investigator, based at the University of California Los Angeles (UCLA). "Dawn has filled in those pages, and more, revealing to us how special Vesta is as a survivor from the earliest days of the solar system. We can now say with certainty that Vesta resembles a small planet more closely than a typical asteroid."

The mission to Vesta and Ceres is managed by NASA's Jet Propulsion Laboratory in Pasadena, Calif., for the agency's Science Mission Directorate in Washington. Dawn is a project of the directorate's Discovery Program, which is managed by NASA's Marshall Space Flight Center in Huntsville, Ala.

UCLA is responsible for the overall Dawn mission science. Orbital Sciences Corp. of Dulles, Va., designed and built the spacecraft. The German Aerospace Center, the Max Planck Institute for Solar System Research, the Italian Space Agency and the Italian National Astrophysical Institute are part of the mission's team. The California Institute of Technology in Pasadena manages JPL for NASA.