This visible image of Tropical Storm Isaac over the U.S. Gulf coast, Hurricane Kirk and Tropical Depression 12 in the central Atlantic Ocean. The image was taken from NOAA's GOES-13 satellite on Aug. 30 at 7:45 a.m. EDT. 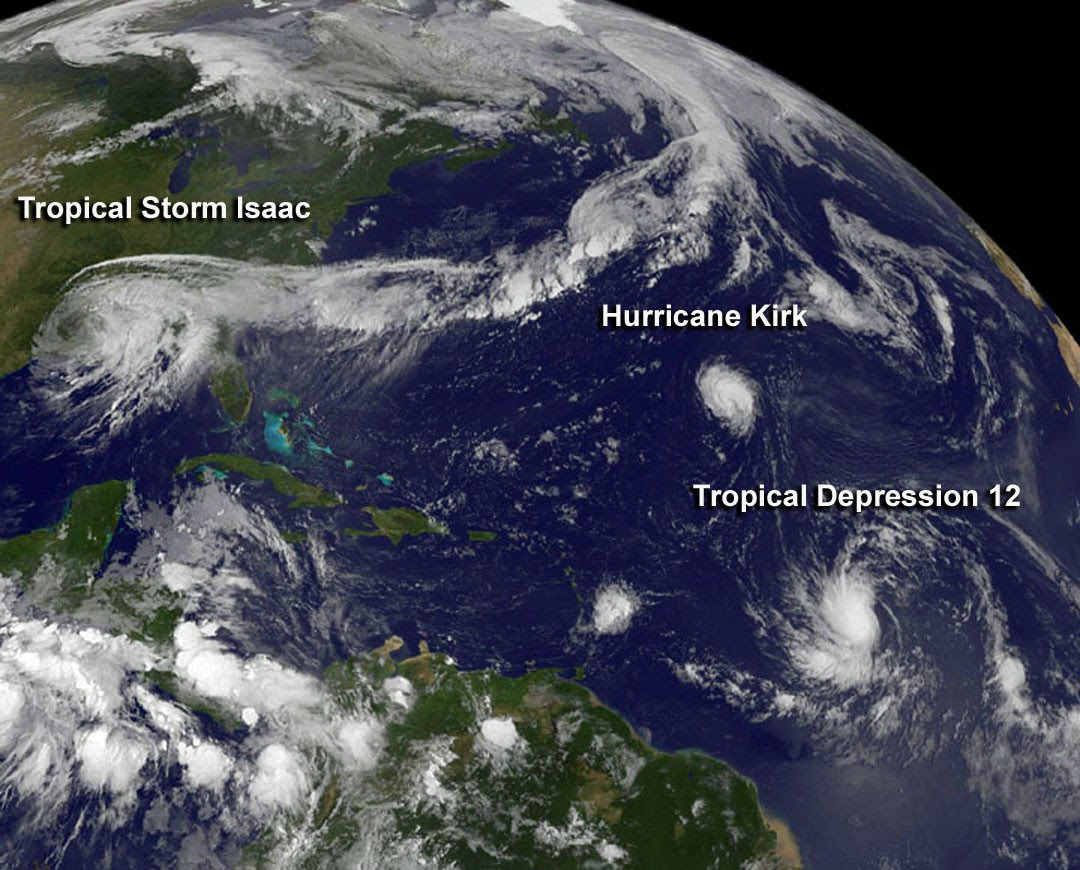 On Aug. 30 at 7:45 a.m. EDT, a visible image from NOAA's GOES-13 satellite captured all three tropical cyclones in a panoramic shot of the Atlantic Ocean basin. The visible image showed Tropical Storm Isaac over the U.S. Gulf coast, Hurricane Kirk and Tropical Depression 12 in the central Atlantic Ocean. Isaac was by far the largest of the three systems, with cloud cover extending from east Texas to the Carolinas. Hurricane Kirk appeared as a small, rounded , compact storm, located northwest of newborn Tropical Depression 12, which appeared larger than Kirk. The image was created by the NASA GOES Project at the NASA Goddard Space Flight Center in Greenbelt, Md.

At 11 a.m. EDT on Aug. 30, Kirk became the fifth hurricane of the Atlantic Ocean season. Its maximum sustained winds were near 75 mph (120 kmh). It was far from land, however, about 1.065 miles (1.715) northeast of the Northern Leeward Islands near 27.2 North and 49.5 West. It was moving to the northwest at 12 mph (19 kmh) and had a minimum central pressure of 989 millibars. The GOES-13 image showed that Kirk was a compact hurricane, and hurricane-force winds only extend 10 miles (20 km) from the center, while tropical-storm-force winds extend up to 70 miles (110 km).

On Aug. 30 at 11 a.m. the warm summertime waters of the Atlantic Ocean gave birth to the twelfth tropical depression on the season. Tropical Depression 12 (TD12) had maximum sustained winds near 35 mph (55 km/h), and is expected to become a tropical storm later on Aug. 30 and could become a hurricane over the weekend, according to the National Hurricane Center.

Satellite data shows a well-defined curved band of thunderstorms wrapping around the western side of the circulation center.TD12 is expected to move over warm waters which will help it strengthen, and it could become Tropical Storm Leslie later on Aug. 30,or Hurricane Leslie by the weekend of Sept. 2.