NASA satellites are providing imagery and data on Typhoon Tembin southwest of Taiwan, and Typhoon Bolaven is it barrels northwest through the Yellow Sea. In a stunning image from NASA's Aqua satellite, Bolaven appears twice as large as Tembin.

The AIRS instrument onboard NASA's Aqua satellite captured this infrared image of Typhoon Tembin southwest of Taiwan and Typhoon Bolaven entering the Yellow Sea on Aug. 26. AIRS has been providing infrared data about cloud temperatures, and sea surface temperatures around the storm. The purple areas indicate the highest, coldest cloud top temperatures. 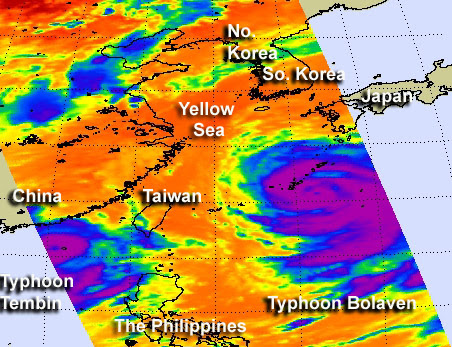 NASA's Moderate Resolution Imaging Spectroradiometer (MODIS) instrument that flies onboard the Terra satellite captured a remarkable image of Typhoon Tembin being dwarfed by giant Typhoon Bolaven at 0240 UTC on Aug. 27, 2012. The visible image shows that the island of Taiwan appears to be squeezed between the two typhoons, while the northeastern arm of Typhoon Tembin's clouds extend over the southern half of Taiwan and sweep over Luzon, the Philippines, where it is better known as Typhoon Igme. Bolaven appears to be twice as large as Typhoon Tembin and has a visible eye. Tembin's eye appears obscured by high clouds in satellite imagery.

Typhoon Bolaven recently passed over Kadena Air Base in Okinawa, Japan as it moves northwestward into the Yellow Sea for a final landfall later this week in North Korea. Clouds from Bolaven's northeastern quadrant were blanketing Japan's island of Kyushu, which is the southwestern most island of the four main islands of Japan. The Yellow Sea is an arm of the North Pacific of the East China Sea, and it is situated between China and Korea.

NASA's MODIS instrument that flies onboard the Terra satellite captured this remarkable image of Typhoon Tembin (lower left) being dwarfed by giant Typhoon Bolaven (top right)in the Philippine Sea at 0240 UTC on Aug. 27, 2012.

On Aug. 26, NASA's Aqua satellite captured both storms in one infrared image. The Atmospheric Infrared Sounder (AIRS) instrument captured an infrared image of Typhoon Tembin southwest of Taiwan and Typhoon Bolaven entering the Yellow Sea. AIRS has been providing infrared data about cloud temperatures, and sea surface temperatures around the storm. Both storms had large areas of very cold clout top temperatures that exceeded -63F/-52C) indicating strong uplift in each storm. At the time of the image, Bolaven was moving over the Ryukyu Islands. They are a chain of islands owned by Japan that stretch southwest from Kyushu, Japan to Taiwan.

On Aug. 27, infrared imagery from NASA's Aqua satellite showed that Bolaven maintained tightly-curved banding of thunderstorms that were wrapping into a well-defined and large low-level circulation center. The center of circulation is as large as 550 nautical miles in diameter!

Typhoon Bolaven in the Yellow Sea

Typhoon Tembin completed its cyclonic loop south of Taiwan, and is now poised to move northeast and pass Taiwan on its journey behind Bolaven, into the Yellow Sea. On Aug. 27 at 1500 UTC (11 a.m. EDT), Tembin had maximum sustained winds near 65 knots (75 mph/120.4 kmh) making it a minimal typhoon. It was located about 240 nautical (276 miles/444.5 km) miles south-southwest of Taipei, Taiwan near 21.6 North and 120.4 East. It was moving to the east-northeast near 14 knots (16.1 mph/26 kmh). AIRS infrared data showed that Tembin showed an eye covered by central dense overcast, as correlated by the MODIS visible imagery.

Tembin is expected to move north past Taiwan over the next couple of days, and track through the Yellow Sea. Tembin's final resting place will be a landfall in southeastern China, near the North Korea border by the weekend.
Contacts and sources:
Rob Gutro
NASA/Goddard Space Flight Center
on August 27, 2012