An animation of satellite observations from August 25-27, 2012, shows Tropical Storm Isaac moving past Cuba and the Florida Keys and into the eastern Gulf of Mexico. This visualization was created by the NASA GOES Project at NASA Goddard Space Flight Center, Greenbelt, Md., using observations from NOAA's GOES-13 satellite. Credit: NASA/NOAA GOES Project

NASA's Atmospheric Infrared Sounder or AIRS instrument is an infrared "eye" that flies onboard NASA's Aqua satellite. AIRS has been providing the National Hurricane Center with valuable temperature data on Isaac's clouds and the surrounding sea surface temperatures, and a time series of data shows that Isaac is consolidating.

The AIRS instrument has been monitoring Tropical Storm Isaac for several days. AIRS data from Aug. 24, 25, 26 and 27 showed Isaac's movements through the eastern and central Caribbean Sea, across eastern Cuba and into the Gulf of Mexico. On Aug. 24, Isaac's strongest convection (rising air that forms the thunderstorms that make up a tropical cyclone) appeared all around the center, except in the western quadrant of the storm.

NASA's Aqua satellite passed over Tropical Storm Isaac on Aug. 26 at 18:15 UTC (2:15 p.m. EDT) when it was over Florida and Cuba and the MODIS instrument captured this visible image of the storm On Aug. 25, when Isaac was affecting Haiti, it appeared more disorganized, and the strongest storms extended from southwestern Haiti into the central Caribbean Sea. On Aug. 26, AIRS data showed the area of strong convection had increased and the largest area was over the Florida Keys, with bands of strong thunderstorms extending over southeastern Florida and the Bahamas. On Aug. 27, Isaac's center of circulation appeared more rounded on AIRS imagery, indicating the circulation center was becoming more organized.

The AIRS instrument onboard NASA's Aqua satellite has been monitoring Tropical Storm Isaac for several days. Shown here are AIRS data from Aug. 24 and 25 (top left and right) and Aug. 26 and 27 (bottom left and right). AIRS has been providing infrared data about cloud temperatures, and sea surface temperatures around the storm. 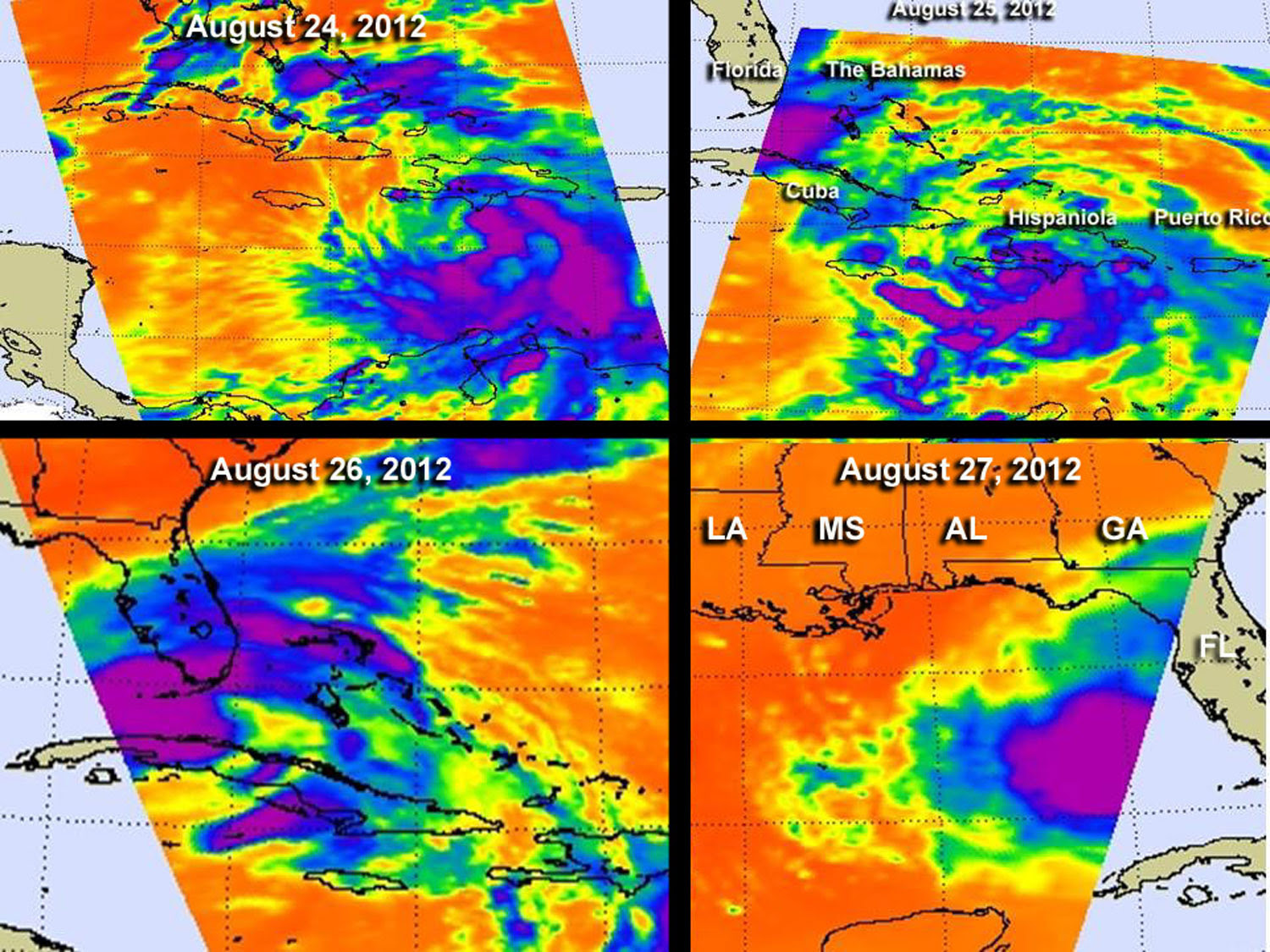 Southeasterly wind shear and the larger than average wind radii, and entrance of some dry air had been keeping Isaac from strengthening more quickly today, Aug. 27. That wind shear is the result of an upper-level low pressure area that lies southwest of Tropical Storm Isaac. As that low moves away and the wind shear lessens, Isaac will have more ability to strengthen.

At 11 a.m. EDT (1200 UTC) on Monday, Aug. 27, Isaac was a strong tropical storm with maximum sustained winds near 65 mph (100 kmh). Isaac is expected to become a hurricane in the next day or two over the warm waters of the Gulf of Mexico. When Isaac reaches maximum sustained winds of 74 mph, it will be classified as a category one hurricane. Isaac's cloud extent is about 480 miles in diameter, as tropical-storm-force winds extend outward up to 240 miles (390 km) from the center.

Tropical Storm Isaac was located about 250 miles (400 km) south of Apalachicola, Fla. and about 310 miles (500 km) southeast of the mouth of the Mississippi River. That puts Isaac's center near latitude 25.7 north and longitude 84.7 west. Isaac is moving toward the west-northwest near 14 mph (22 kmh) and the tropical storm is expected to continue on that track, but slow down before turning to the northwest on Tuesday, Aug. 28. The National Hurricane Center expects Isaac to move over the eastern Gulf of Mexico later today, Aug. 27 and approach the northern Gulf coast in the hurricane warning area on Tuesday, Aug. 28.

A Tropical Storm Warning is in effect for the Florida Peninsula from Ocean Reef Southward on the east coast and from Tarpon Springs southward on the west coast; the Florida Keys including the Dry Tortugas and Florida Bay; east of Destin, Fla. to the Suwannee River; and Intracoastal City to Morgan City, Louisiana. A Tropical Storm Watch is in effect for east of Sabine Pass to west of Intracoastal City, La.