How Does Body Temperature Reset The Biological Clock?

Researchers from the UNIGE, Switzerland, uncover the molecular cogs of clock genes responsive to temperature variations

Numerous processes in our body fluctuate in a regular pattern during the day. These circadian (or daily) variations can be driven by local oscillators present within our cells or by systemic signals controlled by the master pacemaker, located in the brain. Ueli Schibler, profes- sor at the University of Geneva (UNIGE), Switzerland, unveils a mo- lecular mechanism by which body temperature rhythms influence the expression of 'clock genes' and synchronize local oscillators. 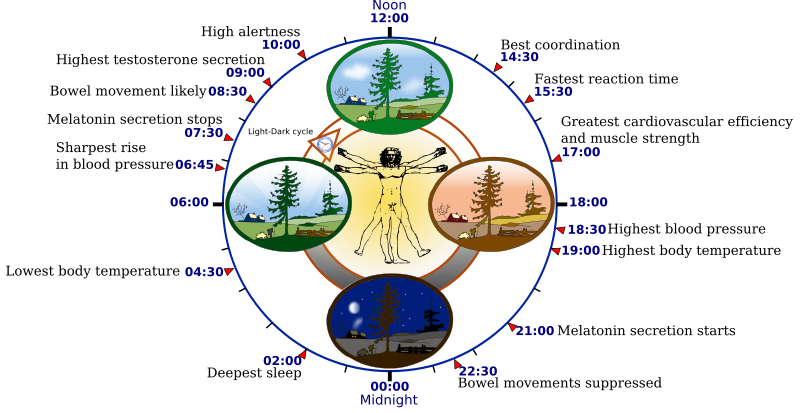 This study, made in collaboration with a team at the Ecole polytechnique fédérale of Lausanne (EPFL), also demonstrates how the production of DBP, a protein involved in detoxification and drug metabolism, is modulated by daily variations of temperature. This research has been published in Science magazine.

Many of our physiological functions, such as heart beat frequency, hormone secretion or body temperature, are regulated by internal clocks. Most of our body's cells possess one of them, formed by a group of 'clock genes' displaying a cyclic activity that peaks every twenty-four hours. These local oscillators are synchronized by a central pacemaker, located in the brain which adapts to geophysical time by light-dark cycles.

The master clock also controls coordination signals that are sent to subsidiary oscillators. 'Body temperature variations constitute one of these daily resetting cues, but we did not know how it functioned', explains Ueli Schibler, professor at the Department of Molecular Biology of the UNIGE. To address this issue, the researcher's team has developed a system allowing to expose cells to simulated body temperatures cycles.

'We have discovered that temperature cycles modulate the rhythmic expression of a protein called CIRP, and that this molecule is required for a robust activation of clock genes on a daily basis', says Jörg Morf, researcher at the NCCR Frontiers in Genetics and first author of the article. In contrast to most regulatory proteins, which control the expression of genes by binding them directly, CIRP acts downstream, by adhering to gene transcripts, the RNAs.

In collaboration with Felix Naef's group at the EPFL, the researchers have then identified virtually all CIRP's target RNAs in living cells, using an ultra sophisticated genetic engineering technique they developed. This achievement allowed probing the transcriptome, that is RNAs from all genes transcribed at a given time. 'CIRP binds transcripts encoding different circadian oscillator proteins in the cell, which increases their stability and allows them to accumulate', comments Ueli Schibler. The sensitivity of their experiments has even enabled the team to localize and count each RNA molecule of a targeted circadian gene named Clock.

Effect on detoxification and drug metabolism

This system functions a bit like that of a clockwork: temperature variations induce a rhythmic production of CIRP, which in turn reinforces cyclic activation of circadian oscillator genes. In humans, the difference of 1°C in body temperature observed between the morning and the evening takes on new significance. 'We have recently demonstrated that such a small fluctuation was sufficient to synchronize cellu- lar oscillators', reports the biologist.

One of these biochemical cogs controlled by CIRP induces cyclic accumulation of DBP, a protein involved in detoxification and drug metabolism. 'Certain antitumor drugs administered to sick mice in the morning lead to a 100% mortality, while the rodents receiving the same dose in the evening all survive. This shows how much internal clocks can influence the efficacy and toxicity of drugs', notes Ueli Schibler.