How 'Beige' Fat Makes The Pounds Melt Away

The numbers of obese people are climbing steeply all over the world – with obvious major consequences for their health. Due to excess food intake and a lack of physical activity, but also due to genetic factors, the risk for overweight people dying from diseases like coronary heart disease, diabetes und atherosclerosis increases. "The body's fat reserves are actually used as a place to store energy that allows surviving lean times," says Prof. Dr. Alexander Pfeifer, Director of the Institute of Pharmacology and Toxicology of the University of Bonn. "But nowadays, hardly anyone in the industrialized nations is exposed to such hunger phases anymore."

Locations of beige and brown fat 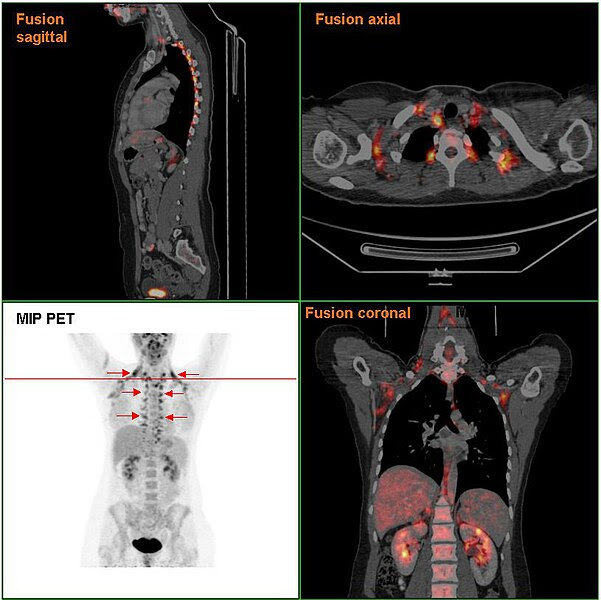 A signal path boosts the burning of fat in the body

Since many people ingest more energy in their diet than they can burn, many harbor dreams of a magic pill that will simply make fat melt away. Now, scientists around Prof. Pfeifer – in collaboration with colleagues from Epileptology and from the PharmaCenter Bonn, together with the Max Planck Institute of Biochemistry in Martinsried - have discovered a signal path in the metabolism of mice that is indeed able to greatly boost combustion inside the rodents' bodies.

"Science distinguishes between three different types of fat," reports Prof. Pfeifer. White fat is used to store energy and is found in the "problem zones" of overweight people. "Brown fat cells, however, are used as a kind of heating unit," says the pharmacologist. "In babies, they make sure that they do not lose too much heat." Unfortunately, adults have hardly any brown fat cells left–except for small areas at the back of their necks and along their spines. The third category – the so-called "beige fat cells" – are the ones the researchers are betting on. "Just like brown fat cells, they are efficient at converting energy from food into heat, and they can form from the undesirable white fat cells," explains Prof. Pfeifer.

How can white fat cells be converted into brown or beige ones?

Consequently, the team's research focused on how to turn the white fat cells into as many beige ones as possible. "The issue was finding a way to brown white fat – of course, not in a skillet, but directly inside the body," the University of Bonn pharmacologist summarized the problem. In a study published in 2009, the team around Prof. Pfeifer found that brown fat needs the neurotransmitter "cGMP." And according to the new findings, this is also true for beige fat. The researchers now studied in mice where cGMP comes from and how it is regulated.

These studies showed that vasodilator-stimulated phosphoprotein (VASP) plays an essential role as a switch on a signal path that slows down the formation of brown and beige fat cells. "This is why mice in which the gene for forming VASP was switched off have the more active brown and beige fat," Prof. Pfeifer summarizes the study results. "These animals are lean and dissipate more energy." In developing a regulator for the VASP/cGMP signaling pathway, the researchers see a potential starting point for promoting the energy- and fat-burning brown fat cells.

"This might even allow us to talk the white fat cells into converting to brown or beige fat," says the University of Bonn researcher. "This might lead to a useful option for successfully treating obesity." But this is still a long way off. So far, this signal path has been described in mice only. "We will have to see first if this is also successful in humans," says Prof. Pfeifer, and added that this was just basic research that could open up new possibilities.