Panels for a new high-tech shelter created at the University of Alabama at Birmingham have passed the National Storm Shelter Association’s tornado threat test. 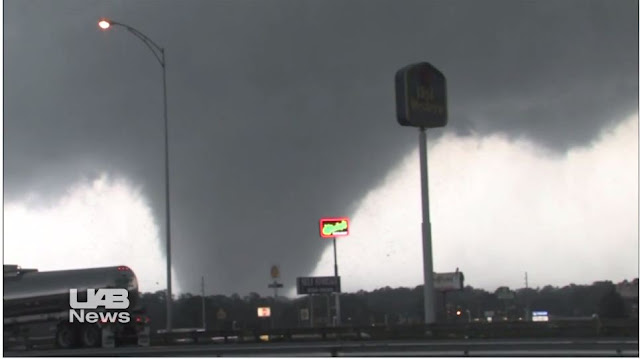 In the NSSA test, 15-pound two-by-fours fired from a pressure cannon were unable to penetrate the panels, made of recycled materials, in a dozen attempts. The wooden missiles hit the panels at 100 mph, the speed at which projectiles typically exit a tornado funnel spinning at more than 200 mph. Such a storm would rate EF5 on the Enhanced Fujita scale and be capable of leveling well-built homes. Passing the tornado test means that the panels also exceed the NSSA hurricane threat standard, which fires 9-pound two-by-fours at 60 to 75 mph.

High-tech panels could protect against hurricane force winds from uabnews on Vimeo.


The successful test represents a first step toward commercial availability, which the team hopes to achieve by the 2013 tornado season. The final hurdle comes this fall when the assembled structure will undergo testing.

“Our effort to apply modern materials science to storm shelters started in the wake of Hurricane Katrina and grew more urgent after we saw 62 Alabama tornadoes in one day this past April,” says Uday Vaidya, Ph.D., professor within the UAB Department of Materials Science & Engineering and project leader. In 2011, tornadoes caused 551 deaths nationally — including 245 in Alabama — and property damage exceeding $28 billion.

“With an average of more than 1,370 tornadoes per year for the past three years in the United States, it’s time we changed they way storm shelters are built with the goal of saving more lives,” Vaidya says.

In the Aug. 1 tests, the UAB panels met the NSSA standards, which are based on Federal Emergency Management Association and International Council Code (ICC 500) requirements. Based on these early results, Vaidya and his team have lined up Sioux Manufacturing to fabricate the tabletop-size panels should the final approvals come through.

The team estimated that if merely 30 percent of the roughly 600,000 homes in the Southeast United States were to opt for a storm-shelter retrofit, it would represent a $500 million market. UAB spinoff Innovative Composite Solutions, led by Vaidya and winner of the 2009 Alabama Launchpad Competition, would oversee aspects of panel assembly in Birmingham.

No gaps in the armor
The recipe of thermoplastic and fiberglass resins and fibers used in the panels are stronger per-unit density than the steel used in many current shelters and weigh 80 percent less, Vaidya says. Some of the same foams and fibers are used in the latest armored military vehicles.

The panels, connected to each other and the floor of an interior room, are designed to keep a family from being crushed or becoming airborne and to protect against flying debris. They also leave the assembly line looking like typical interior walls; they do not need paint and never will corrode.

Made from discarded liner once used to wrap offshore oil-rig pipes, the panels also embrace green engineering techniques. Recycled materials used in the experimental phase itself kept thousands of pounds of waste from landfills.

The design team is continuing to refine the shelter roof and its armored door, which will be sheathed in the same paneling as the walls. The door also will feature a custom three-deadbolt locking system and piano hinges.

“To see panels pass our most extreme test the first time is very impressive,” says Larry Tanner, P.E., manager of the NSSA/Texas Tech Debris Impact Test Facility. “This material is lightweight and sustainable and looks to have a bright future in the storm-shelter industry. If it saves even one life, it will have been worth the effort to design it.”

Selvum Pillay, Ph.D., associate professor in the UAB School of Engineering and team member at ICS, says the shelter represents one of many potential applications for a new generation of materials across many fields. “Related efforts under way at UAB seek to re-engineer the pilings that failed during Hurricane Katrina to flood New Orleans, dampen sound for quieter cities and better fortify combat helmets,” Pillay says.

Contacts and sources:
University of Alabama at Birmingham
on August 29, 2012