Analysis of the abdominal contents of two dinosaur fossil specimens reveals new information about their hunting and eating behavior. The full report is published Aug. 29 in the open access journalPLOS ONE.

The authors, led by Phil Bell of the Pipestone Creek Dinosaur Initiative in Canada, investigated the abdominal contents of two specimens of Sinocalliopteryx gigas, a small carnivorous dinosaur from China. One specimen appeared to have eaten a bird-like dinosaur, and the other's abdominal cavity contained the remains of at least two primitive birds. 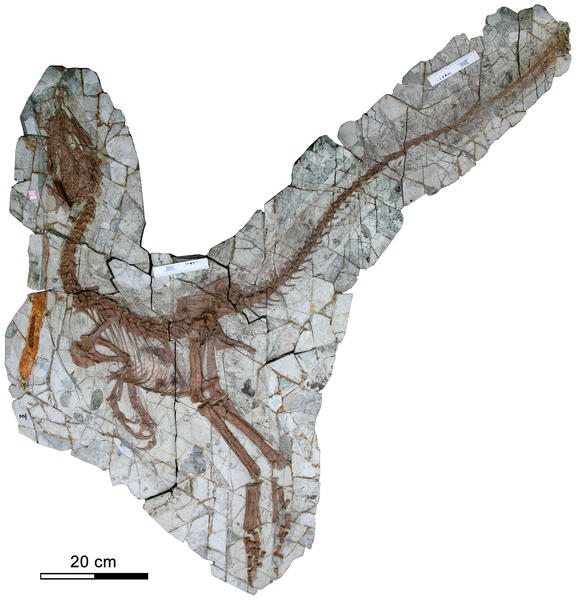 The researchers could not determine whether the prey had been actively hunted or scavenged, but other evidence suggests that the Sinocalliopteryx were adept stealth hunters who may have tackled prey more than a third their own size.

Two skeletons of the large compsognathid Sinocalliopteryx gigasinclude intact abdominal contents. Both specimens come from the Jianshangou Beds of the lower Yixian Formation (Neocomian), Liaoning, China. The holotype of S. gigaspreserves a partial dromaeosaurid leg in the abdominal cavity, here attributed to Sinornithosaurus.

A second, newly-discovered specimen preserves the remains of at least two individuals of the primitive avialan, Confuciusornis sanctus, in addition to acid-etched bones from a possible ornithischian.

Sinocalliopteryx as a stealth hunter feeding on the dromaeosaur Sinornithosaurus (left) 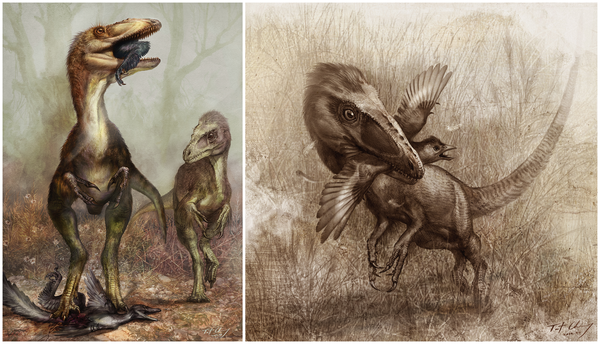 Although it cannot be stated whether such prey items were scavenged or actively hunted, the presence of two Confuciusornis in a grossly similar state of digestion suggests they were consumed in rapid succession. Given the lack of clear arboreal adaptations inSinocalliopteryx, we suggest it may have been an adept stealth hunter.

The presence of at least two confuciusornithine birds within the abdominal cavity of Sinocalliopteryx(CAGS-IG-T1) argues against circumstantial consumption (i.e. the coincidental scavenging of two or more carcasses of the same species), and suggests a behavioral proficiency for predating on flying prey. It is not known if the dromaeosaurid Sinornithosaurus possessed elongate hind and forelimb feathers, as in the closely related Microraptor. If it did, the Sinornithosaurus remains within JMP-V-05-8-01 may constitute an additional example of a flight-capable maniraptoran eaten by aSinocalliopteryx.

In a majority of these examples, what is required to successfully apprehend avian prey is not climbing prowess, but stealth, such that the predator can reach its striking distance before the prey takes flight. It should be remembered that Confuciusornis and other Jehol birds were not as well adapted for flight as most modern aves, and, therefore, likely required greater time to mount an aerial takeoff and escape. Nevertheless, the evidence of bird predation in Sinocalliopteryx suggests that it was a highly capable stealth hunter