Naval Research Laboratory scientist Dr. Michael Stevens is leading an international consortium of scientists in tracking the rapid transport of the exhaust plume from the final launch of the space shuttle in July 2011. The team has found that the plume moved quickly to the Arctic, forming unusually bright polar mesospheric clouds (PMCs) there a day after launch.

After the Space Shuttle Atlantis launched for the final time at 11:29 AM (EDT) on July 8, 2011, scientist tracked water vapor in its exhaust on its travels throughout the upper atmosphere.

On July 8, 2011 the Space Shuttle Atlantis launched for the very last time. On that historic day, as the world watched its last ascent up into orbit and commentators discussed the program's contributions to space flight and scientific research over 20 years, the shuttle helped spawn one last experiment. As the shuttle reached a height of about 70 miles over the east coast of the U.S., it released – as it always did shortly after launch – 350 tons of water vapor exhaust.

NASA's Aeronomy In the Mesosphere (AIM) mission captures images like this of shining noctilucent clouds, also known as polar mesospheric clouds (PMCs), which hover over Earth's poles in summertime. 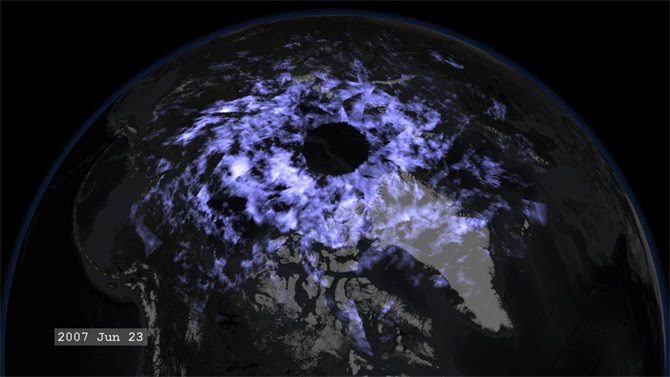 As the plume of vapor spread and floated on air currents high in Earth's atmosphere, it crossed through the observation paths of seven separate sets of instruments. A group of scientists, reporting in online in the Journal of Geophysical Research on August 27, 2012, tracked the plume to learn more about the airflow in the Mesosphere and Lower Thermosphere (MLT) -- a region that is typically quite hard to study. The team found the water vapor spread much faster than expected and that within 21 hours much of it collected near the arctic where it formed unusually bright high altitude clouds of a kind known as polar mesospheric clouds (PMCs). Such information will help improve global circulation models of air movement in the upper atmosphere, and also help with ongoing studies of PMCs.

The Cloud Imaging and Particle Size experiment on NASA's Aeronomy of Ice in the Mesosphere satellite observes PMCs about ten times brighter than usual over Scandanvia the day after launch of STS-135. Water vapor exhaust from the shuttle and other rockets may have led to significant PMC production of the past three decades, complicating the use of PMC occurrence as an indicator of upper atmospheric climate change.

The Sub Millimeter Radiometer on the European Space Agency's Odin satellite observes the STS-135 water vapor plume at 99 km tangent altitude. Shown above (as the colored dots) are eight 12-hour time steps of the plume motion, which is north and east from the U.S. east coast. This rapid transport is unexplained by standard models of upper atmospheric winds.

Understanding the rapid transport of high altitude exhaust plumes near 105 km is providing new insight into the effects of winds at the bottom edge of the space weather regime towards improved forecasts of the co-located E-region of the ionosphere. This knowledge is critical for improving models of communication signal propagation and over-the-horizon-radar, explains Dr. Stevens, a Research Physicist in NRL's Space Science Division. Current theories suggest that the plumes are rapidly transported because of narrow, high-speed wind shears. These wind shears are also linked to the occurrence of so-called Sporadic E events, thus establishing a possible link between plume transport and the lower ionosphere.

During every launch, the space shuttle injects about 350 tons of water vapor from its three main engines off the east coast of the United States between 100 and 115 km altitude. Many studies have now shown that the poleward transport of this water vapor is much faster than global-scale models predict, and a few have furthermore shown that bursts of PMCs near 83 km altitude can result. These observations are forcing researchers to reexamine their understanding of global wind patterns in the lower thermosphere.

The long-term PMC record is also likely to be modified by increased space traffic, which is important because PMCs have been implicated as indicators of upper atmospheric climate change, explains Dr. Stevens. By assembling a suite of satellite and ground-based observations following the space shuttle's final launch, the NRL-led research team has revealed the nature of these shuttle clouds for the first time. The observations from both European and American collaborators show not only the rapid poleward transport of the plume and ensuing PMC formation, but that shuttle clouds are brighter than over 99% of all other PMCs and that the ice particles are larger at higher altitudes, which is the opposite of conventional models.

"Polar mesospheric clouds are the highest clouds on Earth," says space scientist Michael Stevens at the Naval Research Laboratory, Washington, who is first author on the paper. "They shine brightly when the sun is just below the horizon and typically occur over polar regions in the summer. There is some evidence that they are increasing in number and people want to know if this is indicative of climate change or something else that we don't understand."

Since they shine at night, PMCs are also known as noctilucent clouds, and they can serve as an indicator not just of temperature changes, but also of how currents and waves move high in Earth's atmosphere. A visible cloud of water vapor from something like the shuttle also offers a serendipitous way to observe such motions in the upper winds.

"The plume from the shuttle becomes a ready-made experiment to observe the movement in the atmosphere," says Charles Jackman, a scientist at NASA's Goddard Space Flight Center in Greenbelt, Md. who is the project scientist for a NASA mission called Aeronomy Ice in the Mesosphere (AIM) that specifically observes PMCs. "What this team found is interesting since the plume moved so quickly to the pole, indicating that the winds appear much stronger at those latitudes than was thought."

To track the plume across the sky, the scientists collated seven sets of observations, including data from AIM. The first two sets of instruments to see the plume were on a NASA spacecraft called TIMED (Thermosphere Ionosphere Mesosphere Energetics and Dynamics). Next the plume was viewed through the Sub-Millimeter Radiometer on the Swedish Odin satellite. When the plume reached higher latitudes, it was picked up by the ground-based Microwave Spectrometer at the Institute of Atmospheric Physics in Kühlungsborn, Germany as well as an identical ground-based water vapor instrument called cWASPAM1 at the Arctic Lidar Observatory for Middle Atmospheric Research (ALOMAR) in Andenes, Norway. The plume collated into its final shape over the arctic, as a new, extremely bright PMC on July 9, 2011 and there, it could be observed from above by the AIM satellite flying overhead, and from below by another instrument at ALOMAR called the RMR lidar.

Over the course of the plume's travels, these observations showed it spreading horizontally over a distance of some 2000 to 2500 miles. Those parts that drifted into the high latitudes near the North Pole formed ice particles which settled into layers of PMCs down at about 55 miles above Earth’s surface. The speed with which the plume arrived at the arctic was a surprise.

"The speed of the movement in the upper atmosphere gives us new information for our models," says Stevens. "As you get higher up in the atmosphere, we just don't have as many measurements of wind speeds or temperatures. The take-away message here is that we need to improve the models of that region."

Noctilucent clouds – also known as polar mesospheric clouds (PMCs) over Kühlungsborn, Germany on July 9, 2011. These clouds shine brightly even during the night. Shuttle exhaust made of water vapor formed particularly bright PMCs on July 9, 2011 over Scandanavia.

Since observations of PMCs may be connected to global climate, it's important to subtract out sporadic effects such as shuttle exhaust from other consistent, long-term effects.

"One of AIM's big goals is to find out how much of the cloud's behavior is naturally induced versus man-made," says Jackman. "This last shuttle launch will help researchers separate the shuttle exhaust from the rest of the observations."

By allowing researchers to distinguish the shuttle PMCs from more typical clouds, these results will ultimately enable a search of the historical record to separate the anthropogenic PMCs from the natural PMCs.

The research results are reported in a paper in press that was posted on the website of the Journal of Geophysical Research or August 27, 2012.
on August 28, 2012