Pregnant women who are highly exposed to common environmental chemicals - polyfluoroalkyl compounds (PFCs) - have babies that are smaller at birth and larger at 20 months of age, according to a study from Emory University's Rollins School of Public Health published online in the August 30 edition ofEnvironmental Health Perspectives.

PFCs are used in the production of fluoropolymers and are found widely in protective coatings of packaging products, clothes, furniture and non-stick cookware. They are persistent compounds found abundantly in the environment and human exposure is common. PFCs have been detected in human sera, breast milk and cord blood. 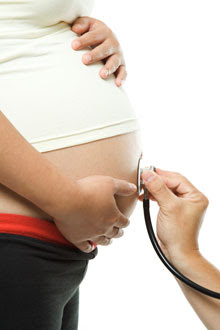 The study, funded by the Centers for Disease Control and Prevention, included 447 British girls and their mothers in the United Kingdom participating in the Avon Longitudinal Study of Parents and Children, a large-scale health research project that has provided a vast amount of genetic and environmental information since it began in the early 1990s.

The researchers found that even though girls with higher exposure were smaller than average (43rd percentile) at birth, they were heavier than average (58th percentile) by 20 months of age. The authors say this path may lead to obesity at older ages.

"Our findings are consistent with these studies and emerging evidence that chemicals in our environment are contributing to obesity and diabetes and demonstrate that this trajectory is set very early in life for those exposed."

According to Marcus, a recent study in Denmark found that women exposed to PFCs in the womb were more likely to be overweight at age 20. And experimental studies with mice have shown that exposure in the womb led to higher levels of insulin and heavier body weight in adulthood.

The researchers measured maternal serum concentrations of PFOS, PFOA and PFHxS during pregnancy and obtained data on the weight and length of the girls at birth, 2, 9 and 20 months. They explored associations between prenatal PFC concentrations and weight at birth as well as changes in weight-for-age scores between birth and 20 months.