Bees That Go 'Cuckoo' In Others' Nests

5 new species of cuckoo bees from the Cape Verde Islands.

The biota of island archipelagos is of considerable interest to biologists. These isolated areas often act as 'evolutionary laboratories', spawning biological diversity rapidly and permitting many mechanisms to be observed and studied over relatively short periods of time. Such islands are often the places of new discoveries, including the documentation of new species.

This shows a male (above) and female (below) of Thyreus denolii, one of the new species discovered and named for the Genoese navigator António de Noli who discovered the islands around 1456. 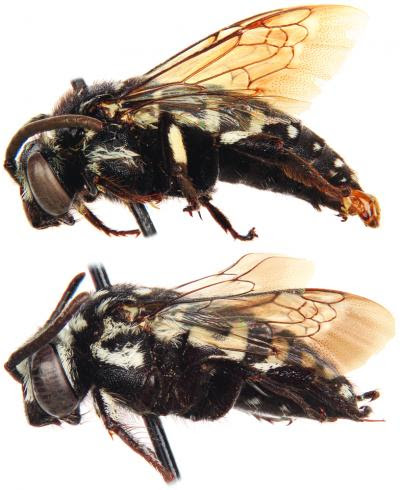 The Republic of Cape Verde comprises 10 inhabited islands about 570 kilometers off the coast of West Africa and have been known since at least 1456. Although the bee fauna of the islands was thought to be moderately well known, research by Dr. Jakub Straka of Charles University in Prague and Dr. Michael S. Engel of the University of Kansas have shown that this is not the case. A recent study published in the Open Access journal ZooKeys documents the cuckoo bee fauna of the islands, revealing that their entire fauna of cuckoo bee species is in fact new to science.

This is the male of Chiasmognathus batelkai, a species from a group of minute cuckoo bees but at 3.2–4.2 mm in length it is the largest of its genus and represents a case of island ‘gigantism’. 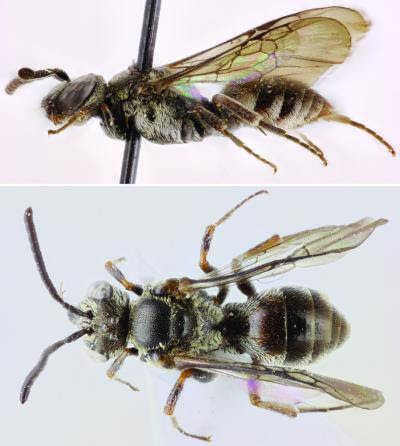 These bees, like the more widely known cuckoo birds, invade the nests of other host bee species. While the host is out collecting pollen for its brood, the cuckoo bee female enters the nest and deposits her eggs on the food resource. The cuckoo bee egg hatches and the immature promptly dispatches the host egg, leaving the pollen and nectar reserves for itself.

The Cape Verde cuckoos are mostly large, black-and-white species, almost zebra-like in their appearance. However, one species, Chiasmognathus batelkai, is quite small, merely 3.2 – 4.2 millimeters in length. Despite its small proportions, C. batelkaiis still the largest species of its genus, a group which otherwise comprises even more diminutive species. It appears as though at slightly less than 5 mm, C. batelkai is a remarkable case of island 'gigantism', whereby founder effects or genetic drift lead to an increased body size in isolated populations during the initial stages of species origination and differentiation.

The researchers are now attempting to explore the diversity of the cuckoo bees' hosts and also to understand their evolutionary diversification across the archipelago.