The blanket of sea ice floating on the Arctic Ocean melted to its lowest extent ever recorded since satellites began measuring it in 1979, according to the University of Colorado Boulder's National Snow and Ice Data Center ( NSIDC)  . 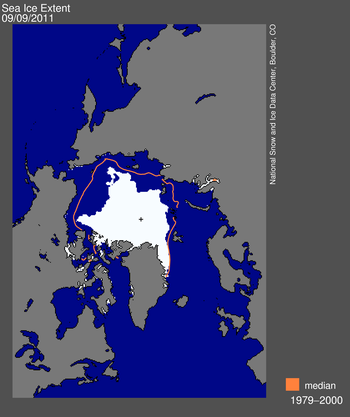 Credit: NSIDC
On Aug. 26, the Arctic sea ice extent fell to 1.58 million square miles, or 4.10 million square kilometers. The number is 27,000 square miles, or 70,000 square kilometers below the record low daily sea ice extent set Sept. 18, 2007. Since the summer Arctic sea ice minimum normally does not occur until the melt season ends in mid- to-late September, the CU-Boulder research team expects the sea ice extent to continue to dwindle for the next two or three weeks, said Walt Meier, an NSID scientist.

While a large Arctic storm in early August appears to have helped to break up some of the 2012 sea ice and helped it to melt more quickly, the decline seen in in recent years is well outside the range of natural climate variability, said Meier. Most scientists believe the shrinking Arctic sea ice is tied to warming temperatures caused by an increase in human-produced greenhouse gases pumped into Earth's atmosphere. 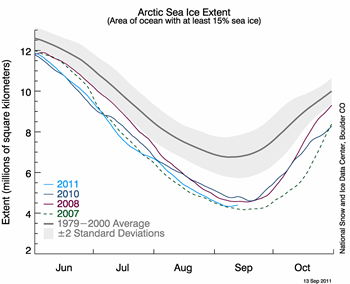 CU-Boulder researchers say the old, thick multi-year ice that used to dominate the Arctic region has been replaced by young, thin ice that has survived only one or two melt seasons -- ice which now makes up about 80 percent of the ice cover. Since 1979, the September Arctic sea ice extent has declined by 12 percent per decade.

The record-breaking Arctic sea ice extent in 2012 moves the 2011 sea ice extent minimum from the second to the third lowest spot on record, behind 2007. Meier and his CU-Boulder colleagues say they believe the Arctic may be ice-free in the summers within the next several decades.

"The years from 2007 to 2012 are the six lowest years in terms of Arctic sea ice extent in the satellite record," said Meier. "In the big picture, 2012 is just another year in the sequence of declining sea ice. We have been seeing a trend toward decreasing minimum Arctic sea ice extents for the past 34 years, and there's no reason to believe this trend will change." 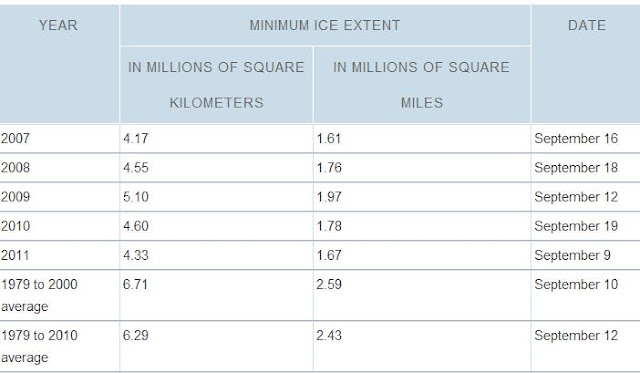 The Arctic sea ice extent as measured by scientists is the total area of all Arctic regions where ice covers at least 15 percent of the ocean surface, said Meier.

Scientists say Arctic sea ice is important because it keeps the polar region cold and helps moderate global climate -- some have dubbed it "Earth's air conditioner." While the bright surface of Arctic sea ice reflects up to 80 percent of the sunlight back to space, the increasing amounts of open ocean there -- which absorb about 90 percent of the sunlight striking the Arctic -- have created a positive feedback effect, causing the ocean to heat up and contribute to increased sea ice melt.

Earlier this year, a national research team led by CU embarked on a two-year effort to better understand the impacts of environmental factors associated with the continuing decline of sea ice in the Arctic Ocean. The $3 million, NASA-funded project led by Research Professor James Maslanik of aerospace engineering sciences includes tools ranging from unmanned aircraft and satellites to ocean buoys in order to understand the characteristics and changes in Arctic sea ice, including the Beaufort Sea and Canada Basin that are experiencing record warming and decreased sea ice extent.

NSIDC is part of CU-Boulder's Cooperative Institute for Research in Environmental Sciences -- a joint institute of CU-Boulder and the National Oceanic and Atmospheric Administration headquartered on the CU campus -- and is funded primarily by NASA.


Contacts and sources:
Natasha Vizcarra
University of Colorado at Boulder
on August 27, 2012