From 1968 to 2008, when PBS permanently pulled Mister Rogers’ Neighborhood from their programming line-up, kids tuned in every day to watch Fred Rogers cheerfully come home and take them on an adventure filled with fantasy characters and life lessons. Though the beloved Mister Rogers died in 2003, the lessons that he passed along to those children, now adults themselves, have carried on. For the sake of nostalgia, here are 10 of the things that a generation of children learned from Mister Rogers and his neighborhood. 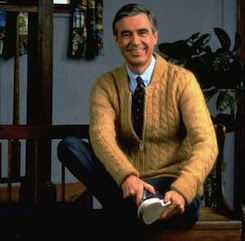 Always Change Into Play Clothes – Before any of his adventures or learning experiences began, Mister Rogers always took off his jacket, hung it carefully in the closet, changed into his sweater and tied up his tennis shoes. Shedding the accoutrements of adulthood mimicked the way that a generation of children were taught to change into “play clothes,” in order to protect their more expensive “school clothes.”

Be a Good Neighbor – The underlying theme in every episode of Mister Rogers’ Neighborhood was the importance of accepting those around you and helping them whenever possible. In a modern world where today’s children rarely even know their own neighbor’s names, Mister Rogers’ insistence on being a good one seems foreign; however, a generation of youngsters learned that message by heart from watching him exemplify it every afternoon.

Take Your Time – Nothing about Mister Rogers’ methods, or his legendary neighborhood, was rushed. He took his time and constructed his show in a way that was deliberately low-key and relaxed. The importance of learning to take it slow and absorb the good things is a lesson that many of his young viewers took to heart.

Curiosity is a Good Thing – Every lesson that Mister Rogers taught was based around the idea that it’s good to be curious, and that asking questions about the world around you is okay. That thriving curiosity was what spurred him to learn how restaurants work and what a postman does, and this was then shared with his young viewers.

It’s Okay to Have Feelings – Much of Fred Rogers’ concept for his show was built around the concept that kids should be taught to accept their feelings, and that those feelings were valid. Even negative emotions like fear and anger were touched upon over the course of his 900 episodes.
Be Yourself – The immortal lessons of Mister Rogers and his message of acceptance can be summed up with one of his most enduring quotations: “There was no one like you before you and there will be no like you after you’re gone.”

Everybody Has a Job, and Every Job is Important – From doctors to zoo workers, Mister Rogers met them all. He also took his young viewers along for the ride, emphasizing the importance of every job and the way that it positively affected his Neighborhood.

A Pet is a Responsibility – Part of every episode’s opening ritual for Mister Rogers was feeding his pet fish, and he often reminded kids of how important it is to take good care of the animals in their care. Kids learned that having a pet meant caring for it properly, and Mister Rogers led by example every single day.

Your Imagination is a Powerful Thing – The Neighborhood of Make-Believe was featured prominently in every episode of Mister Rogers’ Neighborhood. The puppet characters that inhabited this special place were largely designed by Mister Rogers, who also acted as principal puppeteer. His boundless imagination helped kids to see what a powerful force it could be.

Optimistic is the Way to Be – Beneath every lesson that the beloved Mister Rogers taught the youngsters that faithfully watched his show was the underlying theme that optimism makes a difference. There’s no doubt that Mister Rogers saw every glass presented to him as half-full, and that looking on the bright side of every situation would always be his advice.

Despite the impact that he had on a generation of children, there’s nothing in today’s television landscape that bears much resemblance to the gentle, soft-spoken Mister Rogers and the world that he created. Modern kids’ programming, full of blaring sounds and garish colors, is on the other end of the television spectrum. While those shows may have their merits, the slower pace and hopeful message shared by Mister Rogers will always hold a special place in the hearts of his loyal viewers.