The eastern edge of the Namib Desert of southwestern Africa (the pro-Namib) is home to a mysterious phenomenon called “fairy circles”–nearly circular barren patches within a sparse matrix of small short-lived grass species.

In Namibia of southwestern Africa, the sparse grasslands that develop on deep sandy soils under rainfall between 50 and 100 mm per annum are punctuated by thousands of quasi-circular bare spots, usually surrounded by a ring of taller grass. The causes of these so-called “fairy circles” are unknown, although a number of hypotheses have been proposed.

Walter Tschinkel, a Florida State University professor of biological science, recently had a paper published in the prestigious journal PLoS One about so-called “fairy circles,” strangely grassless circular patches usually surrounded by a ring of taller grass on the Namibian landscape.

No one knows what causes the circles, which appear from southern Angola to northern South Africa. In Tschinkel’s paper, “Life Cycles of Mysterious Namibian Grassland ‘Fairy Circles’ Characterized,” he provides a description of the variations in size, density and other attributes of the circles. Tschinkel also found that the circles are not permanent.

Walter Tschinkel stands within one of the mysteriously grassless areas on a Namibian plain.

The circles occur in a range of sizes from small to large. Tschinkel found that the smaller circles, about 2 meters wide, arise and vanish over an approximately 24-year cycle, and the larger ones, about 12 meters wide, arise and vanish in about 75 years. He came to his conclusions after reviewing four years of satellite images and extrapolating the circles’ lifespans from the data.

Tschinkel's paper provides a more complete description of the variation in size, density and attributes of fairy circles in a range of soil types and situations. Circles are not permanent; their vegetative and physical attributes allow them to be arranged into a life history sequence in which circles appear (birth), develop (mature) and become revegetated (die). Occasionally, they also enlarge. 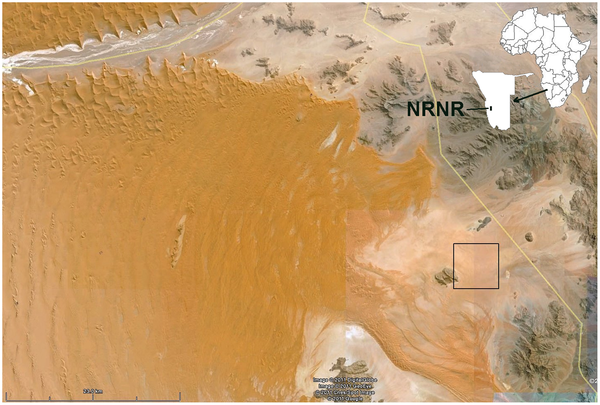 The appearance and disappearance of circles was confirmed from satellite images taken 4 years apart (2004, 2008). The frequency of births and deaths as a fraction of the total population of circles allowed the calculation of an approximate turnover rate, and from this, an estimate of circle lifespan. Lifespan appeared to vary with circle size, with small circles averaging about 24 years, and larger ones 43–75 years.

Overall lifespan averaged about 41 yr. A second, independent estimate of lifespan was made by revisiting circles 2 to 9 years after their clear status had been confirmed. This resulted in a lifespan estimate of about 60 years. Any causal explanation of fairy circles must include their birth, development and death, their mean lifespan and the variation of their features under different conditions.

Soil analysis failed to reveal any significant differences in macronutrients between matrix and circle soils. Experiments using micronutrients are currently underway (unpublished data), but results are not yet available. Whatever causes the absence of vegetation in the circles seems to affect germination little, but does not support plant growth.

PLoS One is published by the Public Library of Science, a nonprofit organization.