On July 28, 2012, the sun emitted a mid-level flare, categorized as an M6.2 flare. The flare is visible here in the lower left-hand side, coming from an active region on the sun named AR 1532. This image was captured by NASA's Solar Dynamics Observatory (SDO) in the 131 Angstrom wavelength, which is typically colorized in teal and which is a particularly good wavelength for observing flares. 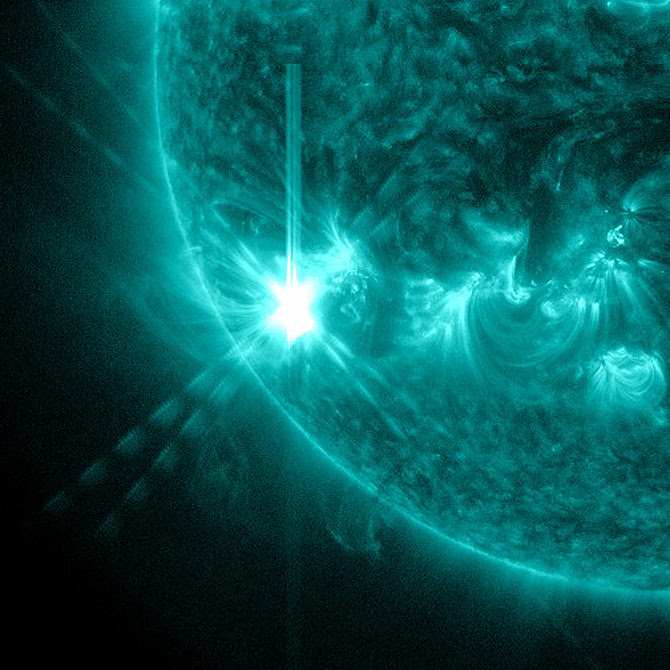 Solar flares are powerful bursts of radiation. Harmful radiation from a flare cannot pass through Earth's atmosphere to affect humans on the ground, however -- when intense enough -- they can disturb the atmosphere in the layer where GPS and communications signals travel. This disrupts the radio signals for as long as the flare is ongoing, anywhere from minutes to hours.

This image of the Sun has sunspot 1532 circled. It is the source of all flare activity since rotating into view on July 27, 2012. 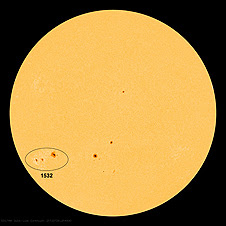 This flare is classified as an M6.2 flare. M-class flares are the weakest flares that can still cause some space weather effects near Earth. They can cause brief radio blackouts at the poles.

Increased numbers of flares are quite common at the moment, since the sun's normal 11-year activity cycle is ramping up toward solar maximum, which is expected in 2013.

What is a solar flare? What is a coronal mass ejection?

For answers to these and other space weather questions, please visit the Spaceweather Frequently Asked Questions page.